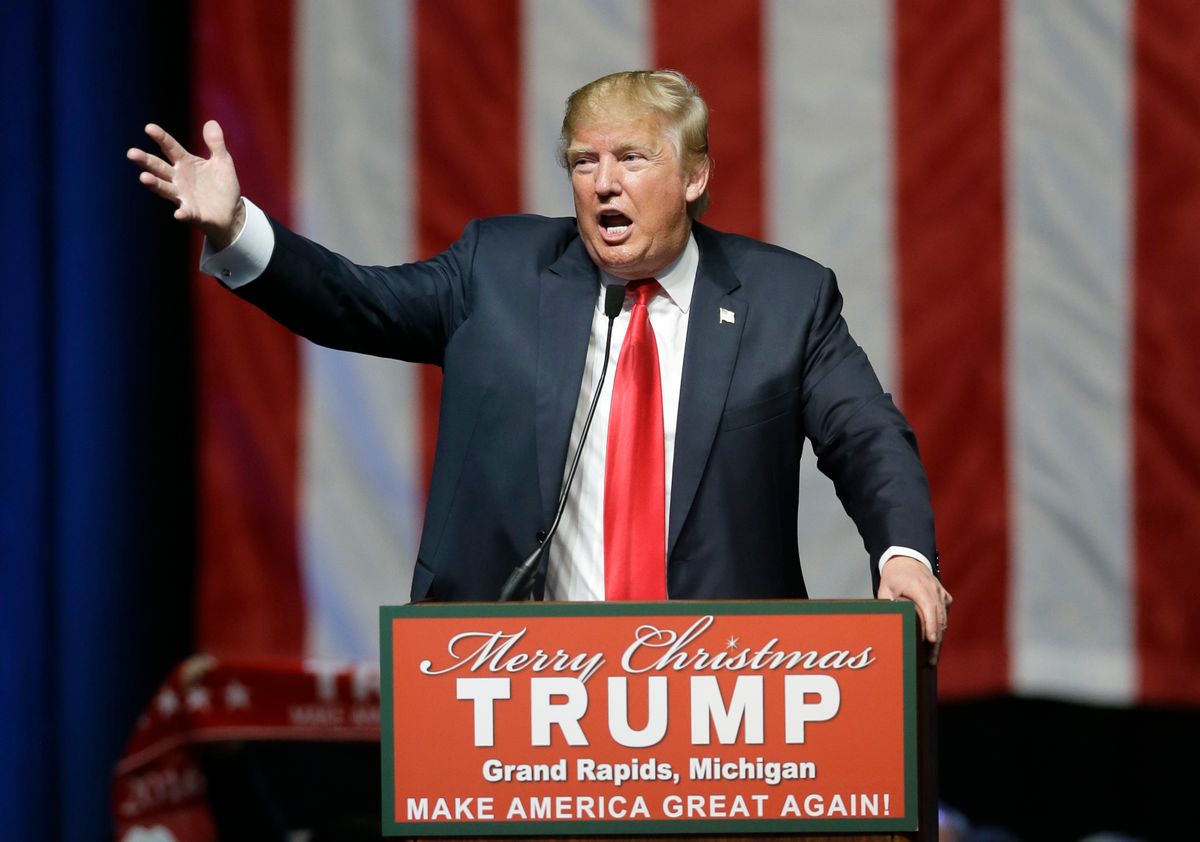 There are many reasons why Donald Trump should not be president. By now the epithets are familiar: huckster, con artist, clown, opportunist, demagogue. Trump is all of those things, but he's also quite dangerous. However unserious he may be, people are listening to him – here and abroad. What he says has real consequences. He's the leading candidate in the Republican race for president; although it's a responsibility he'd never accept, he's responsible nevertheless – for the words he uses, for the behavior he incites.

Since he launched his campaign, Trump has played a perilous rhetorical game, dog-whistling to an angsty working-class, whipping his supporters into a frenzy, and scapegoating entire demographics. Being a reality TV man, Trump is not in the business of thinking before he speaks; it's part of his appeal. He just rambles like a jazz musician at the podium. The result is surely entertaining, but it's no less offensive – perhaps more so because it's likely insincere, given Trump's history.

In any case, the list of dangerous and counterproductive things said by Trump just got a little longer. In an interview  Wednesday with CNN's Anderson Cooper, Trump was asked a simple but combustible question: “Do you think Islam is at war with the West?” Here's the rest of the exchange:

TRUMP: I think Islam hates us. There's something there, there's a tremendous hatred there – we have to get to the bottom of it. There's an unbelieve hatred of us.

COOPER: In Islam itself?

COOPER: I guess the question is, is there a war between the West and radical Islam or is there war between West and Islam itself?

Where to begin? The unfortunate reality is that we do have a problem with Islamic terrorism. I've even argued that the left, generally, has been too slow to acknowledge how deep and broad that problem is. But the sentiment expressed here is perfectly wrongheaded, and can only make matters worse. It also confirms the false narratives of disingenuous theocrats whose only interest in this fight is to defend their own dogmas.

To begin with, Islam is not a person with agency and thus it can't hate or love anything. Islam, like all religions, is a constellation of ideas tethered to a founding text. A faith is nothing but the sum of its believers at any given moment. Yes, there is an alarming number of Muslims in the world right now who hate America and the West more generally, and its empirically untrue to say that has nothing to do with Islam, but it's equally untrue to say we're at war with Islam as such.

Muslims have died in defense of this country. Muslims have also suffered more than anyone from the horrors of terrorism, and they are our indispensable allies in the fight against Islamic extremists. Comments like this make it impossible to communicate that message, and serve as fodder for anti-American propaganda. But Trump doesn't give a damn about that – this is what he does.

Trump will be condemned for his comments, but the depressing fact remains: they will resonate with people determined to misunderstand our circumstances and demonize an entire faith. And it's precisely this sort of bigoted obscurantism that entrenches our enemies and, worse still, alienates our allies.