John Kasich's (not so) secret extremism: How the "moderate" alternative to Trump led a Planned Parenthood witchhunt in Ohio

The Ohio governor has been lauded this campaign season for his supposedly reasonable politics. Just one problem... 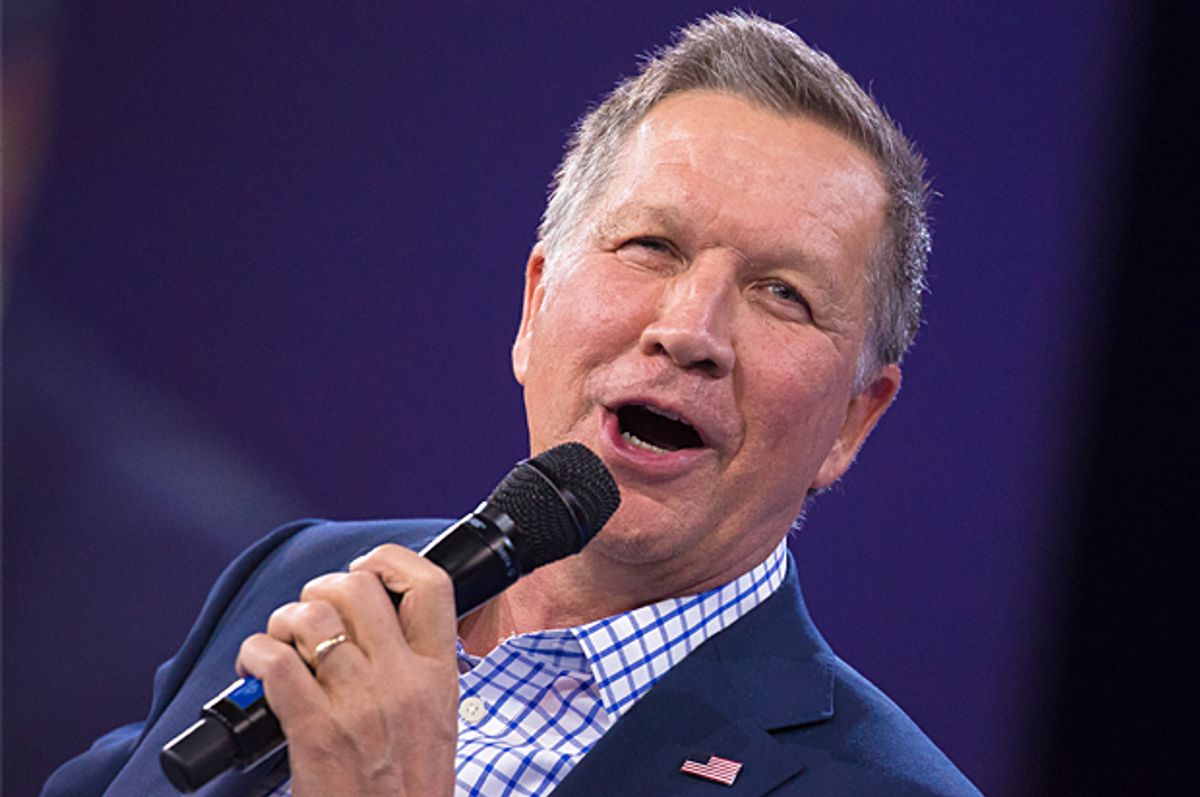 As all eyes turn to the big states up for grabs in next Tuesday's primaries, it's probably a good time to take another look at the alleged "grown-up" in the GOP primary, Ohio Governor John Kasich. Against all odds, he's the last man standing against the Trump-Cruz juggernaut and his only hope at this point is to gather all of Ohio's delegates for Romney's pipe-dream of a negotiation at the GOP convention, conveniently being held in Cleveland this summer.

When I wrote about Kasich back in July, it was a fairly lighthearted look at a guy with a volatile personality and a very short fuse. It was unlikely at the time that he would ever become a serious candidate, what with that deep, deep bench of sexy candidates he was up against. In those more innocent times, it was simply assumed that either one of the hot young guns like Scott Walker, Bobby Jindal or Marco Rubio would land on top or seasoned veterans backed by enormous wealth like Jeb Bush, Chris Christie or Rick Perry would use their experience and political savvy to upset them. If someone had said we would end up at this point in the race with Donald Trump leading, Ted Cruz nipping at his heels and John Kasich making a play for Ohio so that he could leverage his delegates at the convention to deny Donald Trump the nomination, we would have said they needed to go ask Dr. Ben Carson for a professional consultation.

But here we are, and there are polls showing that John Kasich is ahead in Ohio. (Others have Trump leading.) So it's possible he'll be able to pull off this gambit. It's also possible he will flop almost as badly as Marco Rubio is likely to flop in Florida. Kasich came in third in Michigan, a state similar to his own and one in which despite some anecdotal evidence that Democrats crossed over to vote for him, Ted Cruz, the unpalatable extremist, edged him out. His message about being the only grown up in the room still isn't setting the world on fire.

All the press descending on Ohio over the course of the next week will probably focus on the state's economy. That's the issue that seems to be animating the campaign at this stage and Ohio's history as an important swing state brings all that into focus. Kasich  will tout his record there (in fact, touting his record is all he ever does), while Trump will dismiss his successes as being nothing more than good luck due to the fracking industry creating economic wealth in the state. It's unlikely that either will convince many Ohioans of anything. After all, Kasich is the governor, so it's not as if he can tell them something they don't already know, and Trump pretty much lives on cable news.

But it will be interesting to see if any of the national media there will take a look at this story:

Staff of a Columbus, Ohio Planned Parenthood clinic were greeted Monday morning with a freshly painted message in red scrawled on the outside of their clinic: “SATAN DEN OF BABYKILLERS GOD SEE ALLLL Mark 9:14.”

It's just the latest in a string of vandalism acts against Planned Parenthood since the bogus "Center for Medical Progress" released its fraudulent videos. But Ohio is actually one of the ground zero states for anti-abortion activism and the genial 1950s dad, John Kasich, is their most powerful and ruthless leader. For all of his alleged caring and sharing for the poor and weeping in public, he's the women of Ohio's most merciless adversary when it comes to their reproductive freedom.

It's no surprise that anti-choice zealots are vandalizing one of the few Planned Parenthood clinics left in the state. Just two weeks ago Kasich came off the presidential trail to sign a bill to pull all federal funding from the clinics, cutting all state aid tied to insurance companies that cover abortion. It's a cruel measure that will also deny funding for the other life-saving and health enhancing services that Planned Parenthood provides to tens of thousands of women.

And the whole thing is based upon those hideous hoax "baby parts" videos, the makers of which are under indictment in Texas for breaking laws in the making of them. Despite the fact that every single investigation in states across the country has not found any proof of wrongdoing, states like Texas are ignoring the evidence and continuing to use them as an excuse to shut down clinics. John Kasich's Attorney General (and former U.S. Senator) Mike DeWine did not find any evidence that the organization was breaking laws but he went the extra mile to launch spurious attacks on them with phony "inquiries" into whether or not the clinics used "humane methods" of dealing with the fetal tissue. (They follow the same laws and rules that are followed by all medical researchers.)

In other words, the state went on a Planned Parenthood witch hunt looking for reasons to justify shutting them down. It didn't really take any justification. They just did it.

"This legislation will have devastating consequences for women across Ohio. John Kasich is proudly eliminating care for expectant mothers and newborns; he is leaving thousands without vital STD and HIV testing, slashing a program to fight domestic violence, and cutting access to essential, basic health care."

It's just the latest element of Governor Kasich's systematic longterm strategy to virtually eliminate the ability for women to obtain abortions in the state of Ohio. And yes, he calls himself a fierce defender of the U.S. Constitution.

Just a week ago, the Supreme Court heard Whole Woman’s Health v. Hellerstedt, which will decide whether or not abortion, already a legal practice, will be practically accessible to millions of women. It asks if the Texas state law HB-2, which in part ordered that abortion providers have admitting privileges at local hospitals and meet the standards of outpatient surgical centers, places an “undue burden” on women’s access to abortion. Guess who passed a similar law in Ohio? That's right, John Kasich, everyone's favorite moderate.

In 2013, Kasich approved a budget that included some of the harshest anti-abortion legislation in the country, including a provision requiring abortion clinics to have “transfer agreements” with private hospitals. The innovation in his law was that they also banned clinics from partnering with any public institutions such as those affiliated with state Universities. And wouldn't you know it, most of the private hospitals in Ohio are owned by the Catholic church, which obviously will refuse to accommodate clinics that perform abortion. Oh well.

Then, just to prove that he has a sense of humor, Kasich and his henchmen in the legislature made a provision for clinics to seek a "waiver" and then populated the department that would approve such waivers with anti-abortion zealots.

“These draconian rules aimed at closing Ohio’s abortion clinics appear to be a thinly veiled effort to get before the U.S. Supreme Court a challenge to Roe v.Wade, the case that legalized abortion.”

John Kasich is commonly lauded by the media for bucking the conservative orthodoxy requiring GOP governors to reject the federal government's money to expand Medicaid under the Affordable Care Act. Why, Kasich even quoted Bible verses about the caring for the poor and everything! But it's more likely that as a former House budget chairman, he simply understood that the state would require federal help to pay for the health care of the thousands of women whom would he was planning to force to bear children against their will. And all those women who would miss early screenings for breast cancer and uterine and cervical cancer along the rise in HIV and AIDS was sure to be expensive. He was always a good numbers cruncher.

The only state in America that has closed more clinics than Ohio is the state of Texas. Ted Cruz had better watch his back if he wants to remain the poster boy for right-wing extremism.  John Kasich might give him a run for his money.