The Trump Rally Confrontations: A new YouTube genre that reveals the anxiety of the nation

Another incident of violence at a Trump rally; another day in America 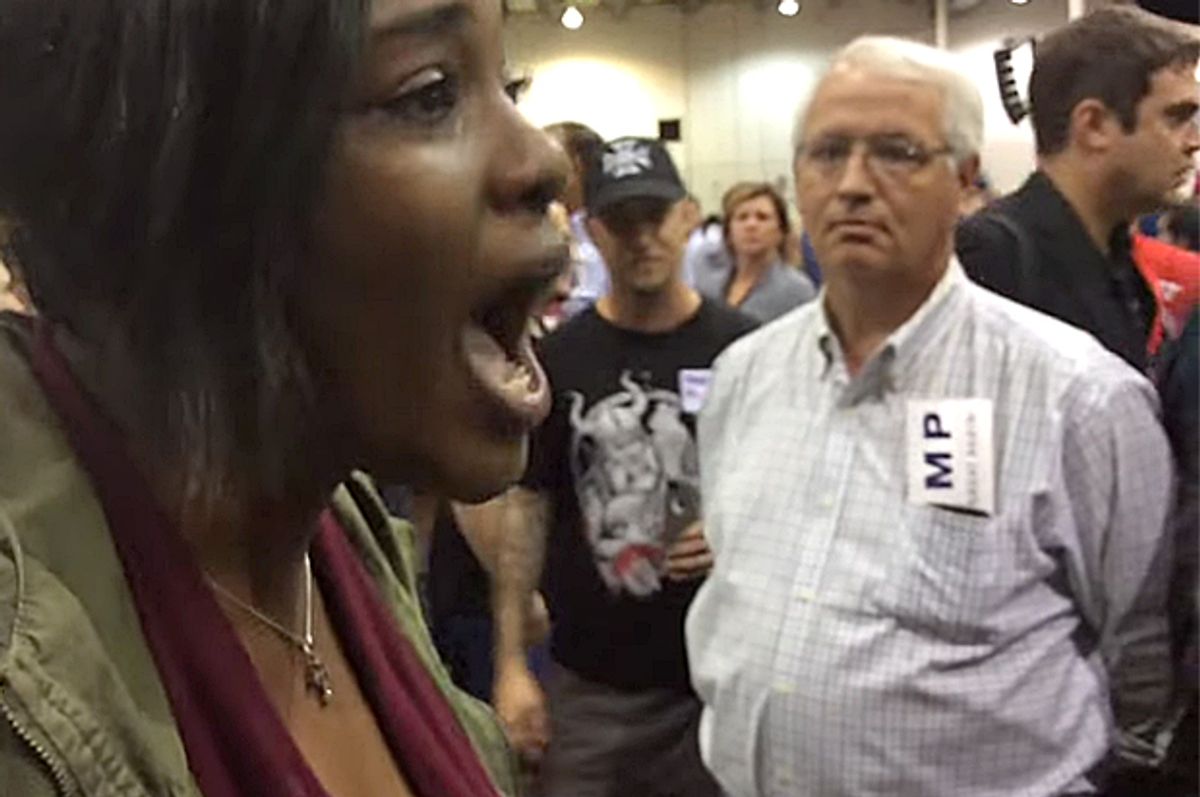 A scene from a Trump rally in Richmond, Va. (YouTube/Marcus Messner)
--

Cue one up on YouTube and the rest follow in quick succession. In some, you can see the man himself, addressing the camera through a CSPAN 2 feed. In others, it’s just his speechifying in the background, and the events unfold as his voice echoing through concrete halls and amplified through college-arena speakers. Some are made by the protestors; some are made by the rallying sympathizers. The videos are almost always the same, though. Young people of color linking hands or shouting into a crowd are confronted by American-flag-wearing or “TRUMP”-sign-holding white attendees. Voices are raised. Fingers are jabbed. People are variously told to “get out” or “shut up.”

This is the Trump Rally Confrontation sub-genre of YouTube videos, and it is a transfixing queue of amateur cinema. They’re all little puzzle boxes, challenging the viewer to first find whatever the hell is supposed to be happening in the video, which is inevitably half-obscured or drowned out by noise, and then to crack open the video’s angle, both cinematic and political. This morning, a new video was added to the list—a video of a black protester being sucker-punched by a white man in a cowboy hat. The face of the puncher can’t quite be seen, but the intent, as he sidles up to the stairs the protestors, is clear. The protestor, Rakeem Jones, is then shown being taken down by North Carolina police, even though he was the one attacked. One of his companions told the Washington Post that the crowd was harassing them from the moment they walked in, including the phrase, “Go home, n-ers.”

Last night, on “The Nightly Show,” host Larry Wilmore tried to find words for GOP frontrunner Donald Trump’s easily escalated protests. In one, according to the CNN newscaster, someone was thrown out every four-and-a-half minutes. But Wilmore struggled to express anything beyond incredulity, and the audience, while eager to pounce on Trump, couldn’t follow the events to a laugh. It’s just too true to really laugh at. Not only is incredibly racist and often violent behavior happening in Donald Trump’s campaign rallies, but from his position on the podium, he’s endorsing it, feeding off of the negative energy lobbed in his direction. The description for this video from a rally a few days ago includes the following, from poster LIVE SATELLITE NEWS:

Some of the crowd getting Carried away (Pun intended) How do you feel do these guys have a right to voice their opinion without being beaten? Or do they deserve what they get for spoiling the rally (Mr Trump always comments that the protesters make the rallies more fun)

These videos all together make for a kind of weird real-life bingeing experience. They’re not TV, but they sort of feel like it, because the world depicted in these rallies does not seem like it should be possible. These look like public arenas where the agreed-upon standards of decency and mutual respect have disappeared, no matter who you think is acting out the most. In the sideshows of the Trump rallies are these confrontations between not just protestors and supporters but between two different visions of America, in short, broken-off, entirely ineffectual conversations that typically devolve to just yelling at each other. Trump’s enthusiasm in overthrowing political correctness has led to chaos in the spaces he “governs,” a mob mentality given breathing room.

CNN’s Jeff Zeleny, covering the peaceful Muslim protestor ejected from a South Carolina rally in January, said that what stunned him most about the scene was not that the protestor, Rose Hamid, was escorted out—but that crowd unleashed a kind of pent-up vitriol at her as she was leaving, wearing her observant headscarf. He said the rally appeared to be “inflaming” something that was already there. In the weeks and months following, that has only grown more apparent. The Trump Presidency is more possible than ever, and though I do not expect Trump to follow through on any of his promises or threats, what his election would assure, I think, is sanctioned bullying—a power struggle where no one wins.

That might be why in every one of these videos, in the background and on the sidelines are dozens of other people doing exactly what our own filmmaker is presumably doing—holding up a phone or a camera, trying to record some of the Great American Meltdown. Because it shouldn’t be real, but at the very least, if it is happening, we should probably bear witness.