This relationship between a living person and a character is an ineffable thing, but the sorrow I felt was real 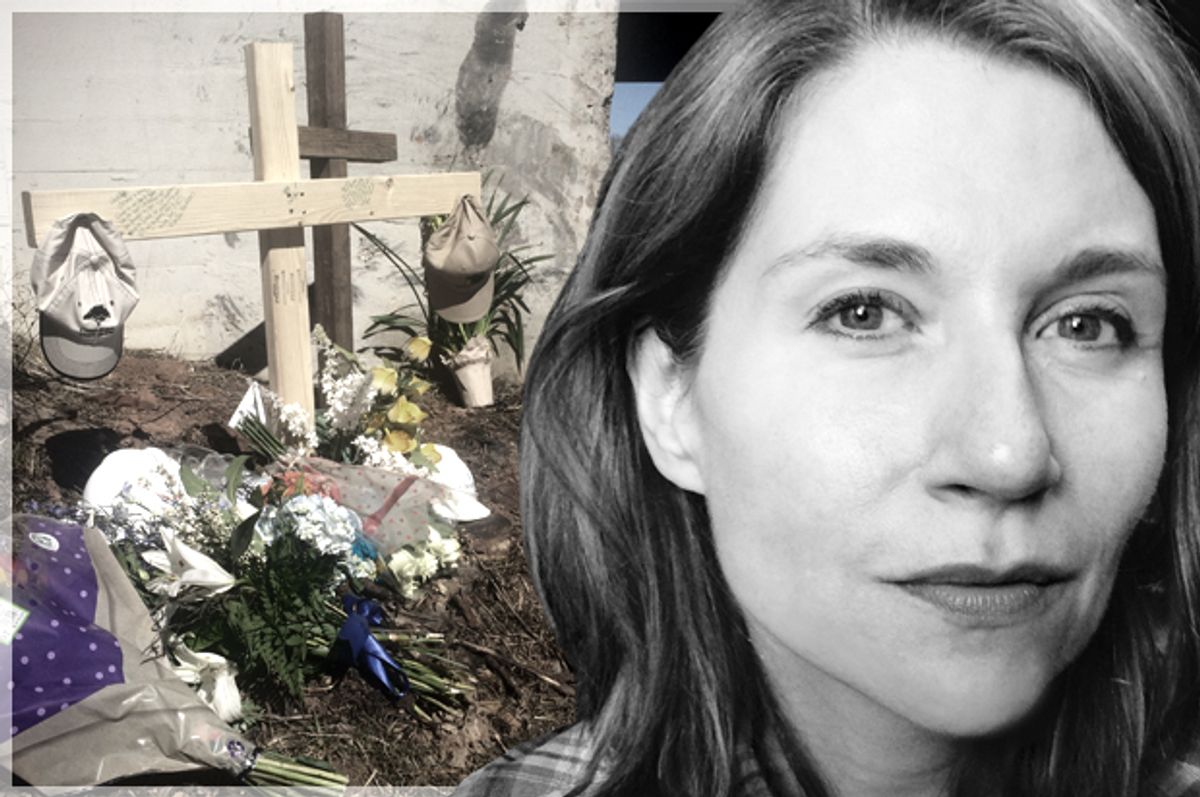 Jennifer Haigh; A roadside memorial for Aubrey McClendon at the site of his fatal automobile accident in Oklahoma City. (Rob Arnold/Reuters/Heide Brandes/Salon)
--

Last week, on a highway in downtown Oklahoma City, a man drove into a bridge support at high speed. A photo of his flaming SUV appeared in the Wall Street Journal. The driver, Aubrey McClendon, was killed on the spot.

If that name means nothing to you, it’s safe to say that you don’t trade gas and oil futures for a living, or read the kind of magazine that publishes annual lists of men so wealthy they pay other people to read magazines for them. I don’t do those things either, but after spending five years writing a novel about a town transformed by gas drilling, I know more about Aubrey McClendon than I do about my own relatives.

McClendon was the founder and longtime CEO of Chesapeake Energy, a company that more than any other has been synonymous with America’s gas and oil boom. A man described, invariably, as larger than life – dynamic, charismatic, audacious; a born wildcatter, constitutionally suited to the volatile industry he dominated. The press referred to him by his first name – Aubrey – because of course there was only one. The trajectory of his career, plotted on a graph, is full of sharp rises and spectacular falls, with virtually no recovery time in between.  In 2012, his personal net worth was $1.2 billion. Then gas prices tanked, and McClendon’s board of directors kicked him to the curb. Losing the company he’d spent a lifetime building must have been a devastating blow, but publicly, anyway, he barely flinched. Before the industry could catch its breath he started a new company, American Energy Partners. Aubrey was back in the game.

Rise and fall, rise and fall. The day before his death, a federal grand jury indicted him for anti-trust violations, collusion to fix prices on oil leases in the Bakken Shale. A day later he was dead, leading to speculation that he cracked up his car on purpose. It’s a question that will likely never be answered. What was in his mind that Wednesday morning, driving too fast and wearing no seatbelt, is impossible to say.

I didn’t know Aubrey McClendon, and he didn’t know me – and yet the news of his death shook me in ways I couldn’t have predicted. On March 2, I was serving on a jury in Boston, my cellphone turned off and stowed. When I turned it on at the end of the day, I found an email from a friend, linked to a news story about McClendon’s death.

The subject line of the email was Kip.

My new novel, "Heat and Light," is set in Bakerton – a community inspired by my hometown in western Pennsylvania, a former coal town that sits smack on top of the Marcellus Shale. The novel explores what happens when the local farmers lease their mineral rights to Dark Elephant Energy, a Texas gas-and-oil company run by a flamboyant CEO known as Kip the Whip.  Kip isn’t Aubrey McClendon, and yet any reader who knows the gas industry will be struck by the resemblance.

In the years I spent writing "Heat and Light," I thought of McClendon daily. Without him there would be no Kip the Whip; I could conceive of such a character only because Aubrey McClendon walked the earth. This relationship between living person and fictional character is an ineffable thing. To me, a character is like a familiar stranger who appears in my dreams, who is and isn’t my third grade teacher, my ex-husband’s mother, that Swedish guy I met on a plane to Paris in 1988 at the start of my junior year abroad. The face may be borrowed from life, but the character is a product of my subconscious, a series of autonomic associations and inventions that remain mysterious even to me. I knew McClendon in the way we know strangers in the age of Google and YouTube. Kip’s sense of destiny is pure Aubrey; so are his nerve and resilience, his unshakeable optimism, his gambler’s heart. Other aspects of Kip -- his youthful fascination with EST, his frequent, contentious and expensive divorces -- are my own invention. Unlike Kip, McClendon married his college sweetheart, once and forever. He and Katie raised three children, adults now, a family grappling with a loss that makes my own sadness at his passing seem foolish and small.

Sorrow at a stranger’s death is not, itself, unusual. In the age of social media, keening over dead celebrities is a communal activity open to all. I’ve always been skeptical of such displays, which seem an affront to anyone who has experienced real loss. I learned the difference 13 years ago, when I lost my own father. On the day he died, I was holed up at an artists’ colony in New Hampshire, doing final edits on "Baker Towers" -- a novel also set in Bakerton, during its heyday in the 1940s and '50s. Everything I know about life in that time and place, I learned from Dad. That book was his great gift to me, one among many. That he didn’t live to read it is a secondary sorrow I still carry, entirely separate from the greater pain of losing him. It’s a grief peculiar to writers, a very specific type of bereavement, a sorrow charged with regret.

My dad would have loved "Baker Towers." I know that now. And yet, I never even considered showing him an earlier draft of the book -- something I might easily have done, if we’d been different people. Dad was a stern man, judicious in all things. In particular, he was a discerning and critical reader, openly dismissive of female writers, a conviction he expressed without apology, a man of his time. It’s entirely possible that this led me to become a writer. Having spent my childhood chasing his approval -- I would have walked on my hands to impress him – I took it upon myself to prove him wrong. Of course I couldn’t show him my manuscript until every sentence was perfect. So I waited, and as a result he never saw it at all.

My sadness at Aubrey McClendon’s death is tinged with a similar regret. He may never have had the slightest inclination to read "Heat and Light," but until March 2, 2016, I could pretend that he might. McClendon sincerely believed that the industry that made him rich was also good for America, for communities and for the world. Some might dismiss this as solipsism. Others call it vision. I think it was both.  Like most visionaries, McClendon focused on the big picture and didn’t waste time studying the pixels – the collateral damage the gas boom has inflicted on communities, the individual lives forever transformed. "Heat and Light" tells that story, and I will always wonder what McClendon would have made of it. More than anything, I wanted to make him see the pixels – and, maybe, to prove him wrong.