"My pace was not sustainable": Why millennial women are burning out on the job

Work-life balance is important even for women without kids. Here are some tips for young women to achieve it 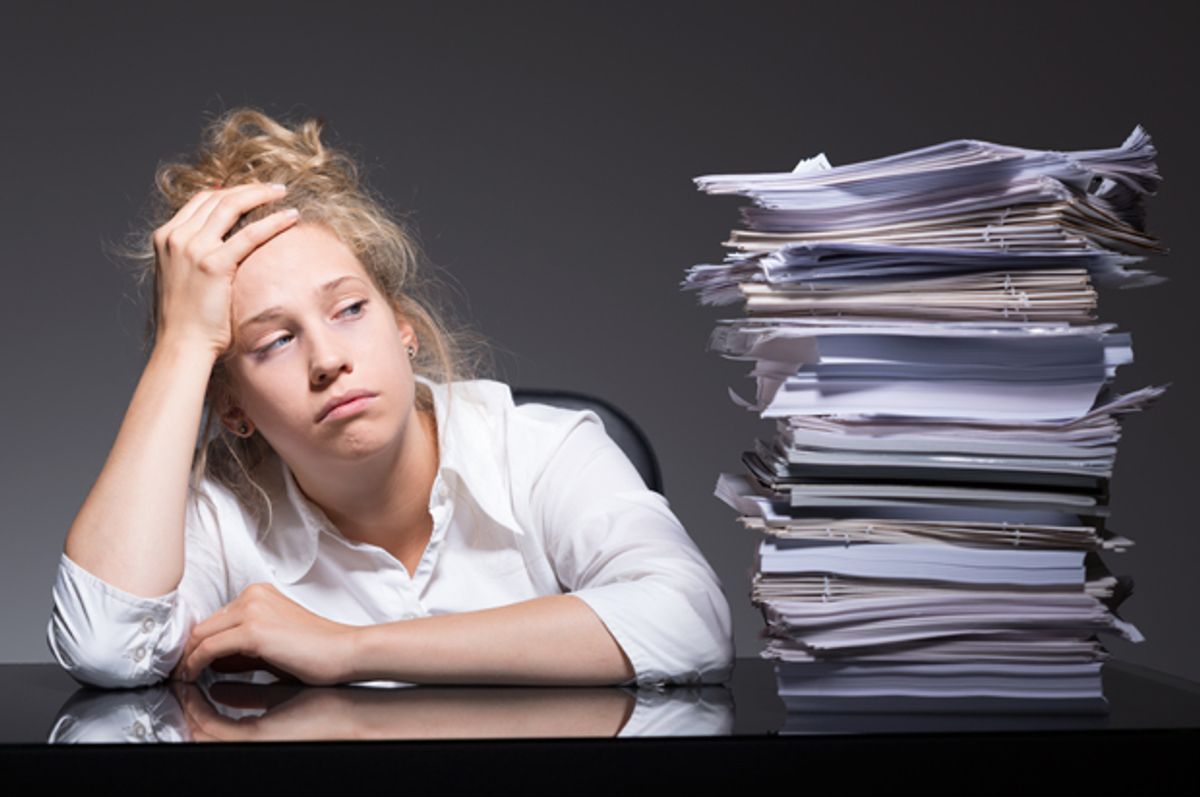 Professional burnout is a topic on which self-help books abound (two of the most popular being the catchily titled "The 4-Hour Workweek" by Tim Ferris or the "One Minute Manager" series by Ken Blanchard). New to this conversation is how burnout is affecting women in an age where the clock on their careers is less and less tied to their biological clocks.

In Anne-Marie Slaughter’s much-shared piece, “Why Women Still Can’t Have It All” in The Atlantic, she explained why the pull of being at home with her kids in New Jersey drew her away from her successful government job in D.C. But what’s interesting is that this phenomenon isn’t about motherhood; it’s that the millennial propensity to overachieve and seek approval—in some cases mixing with the frustrations of glass ceilings and sexism in the office—is taking a toll on young childless women. Capable women are leaving the workforce in droves for disappointing reasons.

To those who can’t shake the notion that motherhood is to blame for women dropping like flies from their promising careers, Harvard Business Review answers with the kicker:

It simply isn’t true that a large proportion of [the studied sample of Harvard Business School] HBS alumnae have ‘opted out’ to care for children. When we asked Gen X and Baby Boom women (who are most likely to have children under 18 living with them today) about their current status, we learned … Only 11 percent are out of the workforce to care for children full-time. The figure is even lower (7 percent) for women of color.

On Tuesday, Fast Company came out with a groundbreaking article incorporating interviews with millennial women (although more accurately the upper end of this age group is through to the younger end of Generation Y) who are burning out and a McKinsey study on how widespread it is.

Jenny Blake, one of the women Fast Company interviewed, worked full-time at Google while juggling writing a book in her free time. “My pace was not sustainable, and I only realized it after I crashed — just weeks before my book was set to launch,” she said.

Sustainability isn’t just a term that needs to be considered in regard to environmental issues; it’s also important to keep in mind for personal work-life balance so that women can achieve all they can, not just in the present, but for years to come.

In order to combat professional burnout, women need at minimum a doting parent (or concerned friend, significant other or therapist) urging them to avoid putting too much on their plates too fast. But for those who aren’t so lucky, we’ll play the part with a few solutions that have worked for successful men and women who are still in grinds without burning out.

Jenny Blake described the importance of learning to “create boundaries,” but acknowledged, “For younger women in particular, it can be hard to say no, especially in competitive jobs or industries where there would be a (perceived) line out the door for their replacement.”

If you’re worried about how trying out any of these solutions might affect your job security, one way to ease in is to inform your boss explicitly that you’re testing out a new practice before beginning it. Smart managers will recognize your self-awareness and interest in improving your efficiency for what it is; after all, “work smarter, not harder” isn’t a phrase we throw around for nothing these days.

Come up with a deal that if your productivity doesn’t improve after a set time period, you’ll abandon your plan — that way you’ll be motivated and not fear for job security before embarking to level that work-life balance see-saw.

Writing in Forbes, Mattan Griffel noted his practice of only having meetings on Wednesdays. At first this seems unrealistic for most office environments — particularly those where women don’t feel in charge of their schedules — but coming from Griffel, one of Forbes’ "30 Under 30," it’s certainly worth trying.

He tells of friends who adopted Wednesday meetings, calling the practice a “game changer” that “will probably make me hundreds of thousands of dollars more productive over the course of my life.” With many small offices going low to no meetings, you may want to take control of your own meeting schedule in a fresh way or recommend suggestions to someone who can change up the meeting schedule. They’ll thank you if it works out.

In her conversation-changing book "Lean In," Sheryl Sandberg discusses the importance of leaving the office on time to have dinner with her family, even if she feared judgment from child-free colleagues. See the trend? Setting boundaries is something in popular news and books because the most successful professionals (Sandberg, Griffel) are doing it. There’s proof it works.

U.S. News & World Report has some great tips in “How to Set Boundaries (So You Can Have a Life)." In particular they emphasize “leaving on time whenever possible” at a new job, dropping hints about your family or workout habits (depending on the culture, savvy workplaces will see outside hobbies as helpful to your productivity, within reason), and being transparent when you’ve been on the job a while and want to change your boundaries.

Most ambitious professionals want to give 100 percent at work and outside of it, but it’s important to take the long view. It’s certainly a jarring concept to think that the female equivalent of midlife crisis (buying that Porsche) could mean a quarter-life crisis where all of the professional accomplishments that were top priority for the last five to 10 years are abandoned. You owe it to your future self to make sure all your hard work isn’t going to be for nothing if you burn out.

And when we inevitably hit our midlife crisis instead of our quarter-life one, let us all say suck it, cheesy rom-coms (I’m looking at you, SJP in "I Don’t Know How She Does It"). Maybe I can’t have it all, but I can buy that Porsche just as well as any other man my age.