A calmer, cuddlier, and way more horrifying GOP takes the stage for the CNN debates

Last night, the horrifying rhetoric of the party came through, even as the real topics were avoided 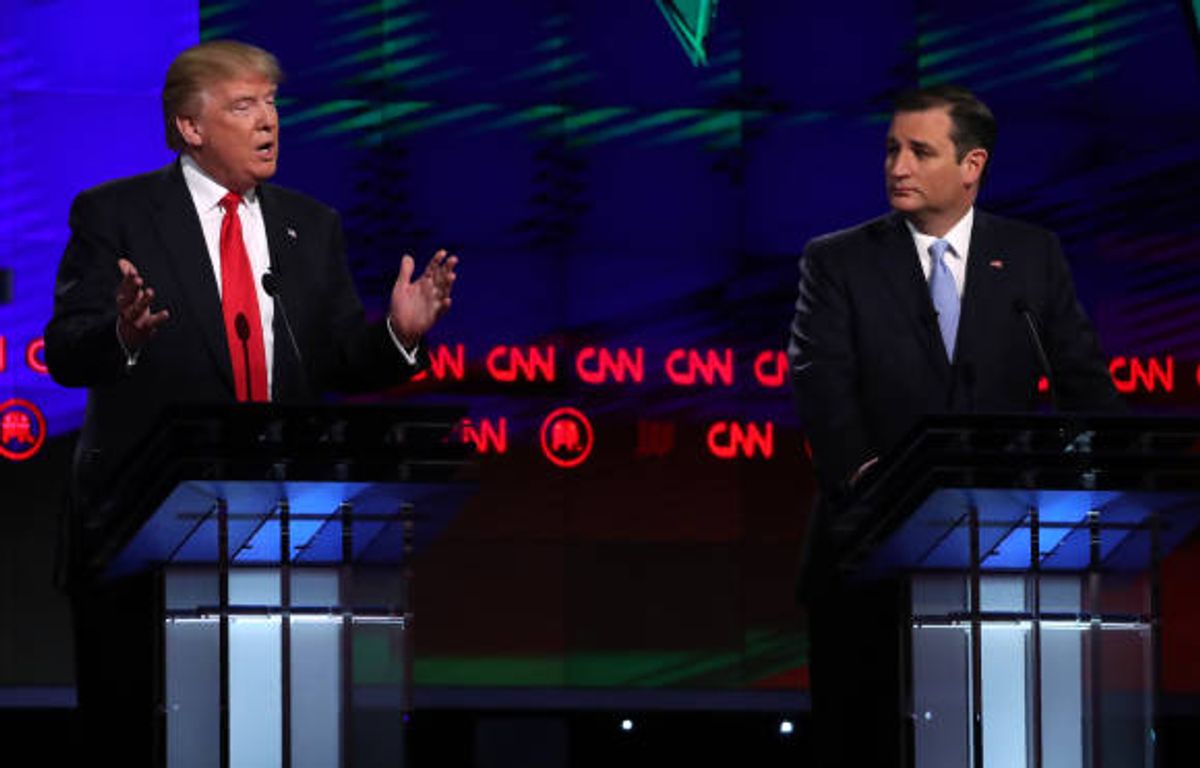 The thing about a Republican debate where the candidates aren’t literally measuring their dicks in competition is that both boring and horrifying. Watching the men talk—there are just four now, and they visually appear to be pastily interchangeable—was rather monotonous, a blur of royal blue and splashy crimson and dark gray suiting. It was calm enough that it merited onstage observation. “So far I cannot believe how civil it's been up here,” Trump said early in the debate, as if he does not arbitrate exactly how civil the tenor of the conversation would be.

But he did have a point: Last night’s debate on CNN looked something like a political party comprised of adults having a discussion. The crucial word, though, is “looked”; listening to their words was another experience entirely. Senator Marco Rubio shoehorned an awkward, syrupy anecdote into nearly every medium-sized pause that came his way; Governor John Kasich continued to play the gratingly self-pitying violin of the nice guy who isn’t everyone’s frontrunner. Senator Ted Cruz is still a hard-line evangelical with a veneer of Ivy League sophistication (or serial killer charm, depending on who you ask). And Donald Trump still utters sentences that are neither logically nor grammatically consistent.

This, for example, is Trump’s response to a question about whether or not he would follow the Pentagon’s advice about ground troops to combat ISIS.

I would listen to the generals, but I'm hearing numbers of 20,000 to 30,000. We have to knock them out fast. Look, we're not allowed to fight. We can't fight. We're not knocking out the oil because they don't want to create environmental pollution up in the air.

I mean, these are things that nobody even believes. They think we're kidding. They didn't want to knock out the oil because of what it's going to do to the carbon footprint. We don't fight like we used to fight. We used to fight to win. Now we fight for no reason whatsoever. We don't even know what we're doing.

Without the distracting fireworks of the foreground, last night’s CNN debate forced the Republicans to have a substantive conversation, and as it turns out, that conversation was just awful. Last night’s debate was a callback to that Trump-less debate in January, which also concealed its bonkers rhetoric underneath a veneer of less-fascistic civility. But with just four candidates and a rapidly closing race, the conservative ideology grew claws and scales, like Dany’s unholy fetus in “Game Of Thrones.” Climate change was roundly denied. Government, according to four men running for government office, was bad. ISIS and/or all Muslims were also bad. H-1B visas are okay only when Trump misuses them.

But though that’s all bad, that’s not even the worst of it. Well into the debate, moderator Jake Tapper asked Trump how he responded to the violence at his rallies, a recurring issue that once again was the subject of news yesterday morning, when a protestor was sucker-punched by an audience member. As I wrote then, the rules of our society seemed to be breaking down inside these rallies. Shortly thereafter, news broke that Breitbart reporter Michelle Fields had been assaulted by Trump’s campaign manager Corey Lewandowski, in the middle of asking the candidate a question.

As Dave Weigel dissects at the Washington Post, the issue of violence at these rallies—either towards peaceful protestors, people of color, or journalists—was whiffed on completely, not just by Trump, who pivoted to loving America and cops, but by every single one of his rivals. There’s an obvious and sad reason: They cannot divorce themselves from the galvanizing hate that currently fuels the GOP. If they do, they’ll lose their base.

Rather comically, right before the debate, Republican National Committee chair Reince Priebus pleaded for civility and unity—first in an interview on CNN and then in a speech that delayed the start of the debate in Miami, Florida. After watching the debate conclude, with an hour of droning about implausible foreign policy decisions and another hour of dismantling the government but so very, very little on the pressing issues of lived reality in this country, it seems like Priebus got his infernal wish: The Republican Party is apparently united—in deliberate, dreadful ignorance. The candidates may conspire to settle on just one nominee. But beneath them, the populace they seek to govern and the members of their own party are roiling with agitation, devouring each other whole.