Activists are calling on the company to stop renting illegal Israeli settlements, and even created a parody website 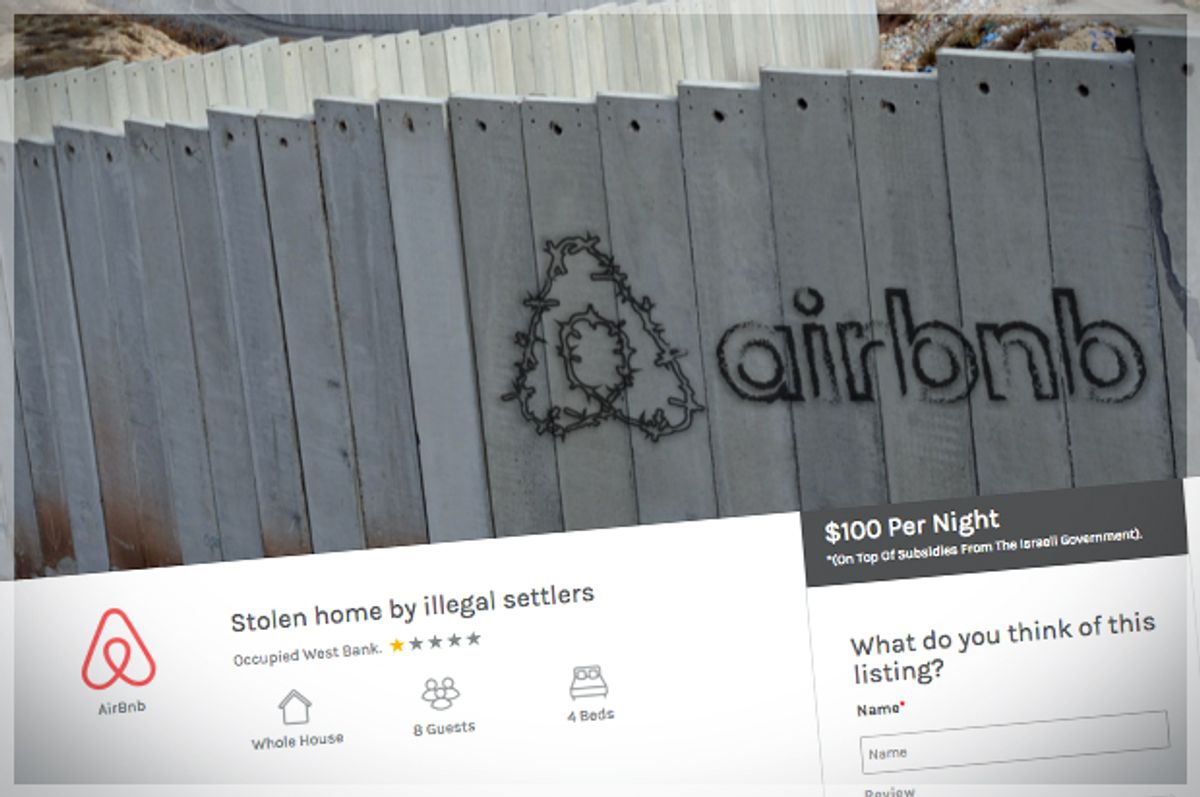 A screenshot of the parody Airbnb site, created by the activist groups (SumOfUs.org)
--

More than 140,000 people from around the world have joined peace groups in calling on international housing rental giant Airbnb to stop profiting off of illegal Israeli settlements in the occupied Palestinian territories.

A new petition launched by Jewish Voice for Peace, the U.S. Campaign to End the Israeli Occupation, CODEPINK, American Muslims for Palestine and other peace groups calls on Airbnb to stop listing properties in Israeli settlements, which are considered illegal under international law.

Activists delivered the petition to Airbnb's headquarters in San Francisco, California on Thursday afternoon. Social justice group Jewish Voice for Peace, or JVP, posted a livestream video of the action to Facebook.

Posted by Jewish Voice for Peace on Thursday, March 10, 2016

Airbnb lists rental properties in illegal Israeli settlements in the occupied West Bank, but mislabels them as "in Israel."

There have also been reports in the Israeli media of Israeli Airbnb renters discriminating against people with Arab names, which violates the company's own anti-discrimination policy.

Israel illegally militarily occupied the Palestinian West Bank and Gaza in 1967. Since then, in flagrant contravention of international law, Israel has slowly been colonizing more and more of the West Bank with segregated settlements, carving up the Palestinian land into what former President George W. Bush warned was becoming like "Swiss cheese."

Israel's settlements directly violate Article 49 of the Fourth Geneva Convention. The International Court of Justice cited this in its 2004 ruling that "the Israeli settlements in the Occupied Palestinian Territory (including East Jerusalem) have been established in breach of international law."

In addition to their petition and delivery action, the peace groups created a parody website to protest Airbnb's practices.

The fake site lists a "stolen home by illegal settlers" in the occupied West Bank, at a price of "$100 per night* (on top of subsidies from the Israeli government)."

"Come stay at an illegal settlement built on stolen Palestinian land. This stolen home comes with views of the Apartheid Wall," the description for the listing reads. "You may hear occasional gunfire from the Israeli Occupation Forces firing zone, which recently replaced a destroyed Palestinian village nearby."

It even offers viewers a chance to leave reviews on the fake property.

"By listing properties in illegal Israeli settlements, Airbnb is profiting off of the ongoing displacement of Palestinians from their land and their homes," explained Stefanie Fox, deputy director for Jewish Voice for Peace, in a statement about the protest.

"Airbnb's policies that enable and incentivize the displacement of people from their homes, whether in Palestine or gentrifying cities around the world, are unacceptable," Fox said. "Airbnb should cease providing cover for Israel's expansionism by normalizing the fact that settlers have built these homes on stolen land."

"When someone vacations in settlement property they are directly funding occupation and the suffering of the Palestinian people," remarked Kristin Szremski, director of media and communications for American Muslims for Palestine.

"Palestinians are not even allowed on the roads surrounding the settlements," Szremski added. "These properties are not in keeping with Airbnb's strict anti-discrimination policies and we ask Airbnb to remove all properties in Israeli settlements."

In January, Saeb Erekat, secretary general of the Palestine Liberation Organization, sent Airbnb CEO Brian Chesky a letter. "By promoting these listings on your company's website, Airbnb is effectively promoting the illegal Israeli colonization of occupied land," Erekat wrote, calling on the company to "end its operations in illegal Israeli settlements, in line with international law."

"Almost immediately after Israel's military occupation of the West Bank in June 1967, the Israeli government began establishing settlements in the occupied Palestinian territories," Human Rights Watch writes in the report. "From the outset, private businesses have been involved in Israel's settlement policies, benefiting from and contributing to them."

Moreover, as illegal Israeli settlements are expanding, many Palestinians are themselves being evicted from their homes. Palestinian families are being kicked out of occupied East Jerusalem, and a U.N. report found that the Israeli government demolished at least 1,177 Palestinians' homes in the West Bank in 2014 alone.

"There's no delicate way to say this: Airbnb’s rental suites are built on top of the ruins of Palestinian lives and livelihoods," Sondhya Gupta, senior campaigner from activist group SumOfUs.org, commented in a statement.

"By listing these homes, Airbnb is directly helping Israeli settlers legitimize their occupation of stolen land, contributing to the Israeli government's decades-long policies of occupation, discrimination, and dispossession," she explained.

"Adding insult to injury, Palestinian residents of the West Bank are effectively banned from renting these Airbnb homes," Gupta said.

In 2005, in response to Israel's illegal activities and repression of the indigenous Arab population, Palestinian civil society created the Boycott, Divestment and Sanctions campaign, or BDS, an international grassroots movement that promotes nonviolent economic means to pressure Israel into complying with international law and respecting Palestinian rights.

Airbnb has become a target of this movement, as has international real estate corporation RE/MAX, which sells many millions of dollars worth of properties in illegal Israeli settlements.

A 2013 U.N. report by Richard Falk, international legal scholar and former U.N. special rapporteur on the situation of human rights in the Palestinian territories occupied since 1967, stated: "By providing international brand name affiliation and recognition, start-up training, ongoing training, technological resources, and advertising and marketing, as well as by profiting from such sales, Re/Max LLC has constant interaction and influence over its franchises."

"Real estate agents may be held accountable for their involvement with settlements in occupied Palestine," the U.N. report added.

"Pressure by the international community to uphold international law is no longer limited to States as the primary duty-bearers," it continued. "Companies, individuals and groups can be implicated for behaviour that contributes to wrongful acts."