Bernie & Hillary should be very careful: Why underestimating Donald Trump would be a fatal mistake

While many believe a Trump nomination would seal a victory for Democrats, early primary results suggest otherwise 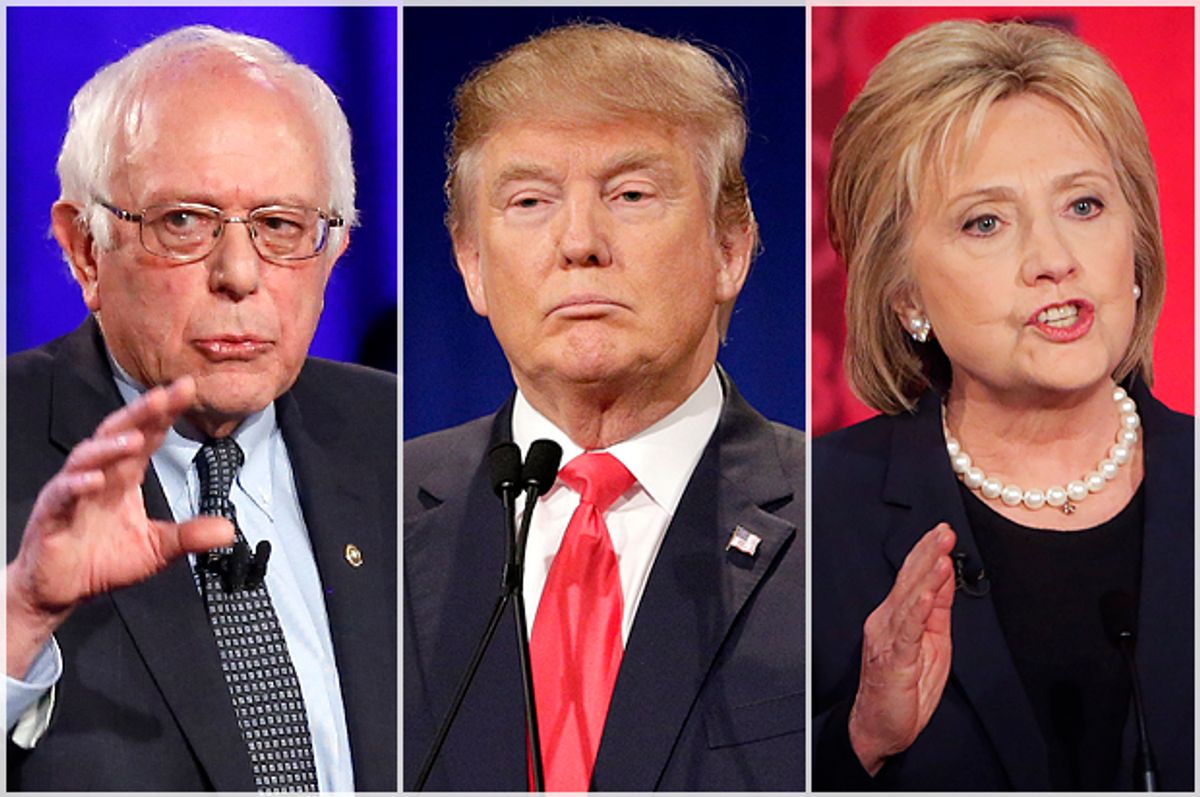 In the 2016 presidential race, Democrats have a lot to look forward to. Both Bernie Sanders and Hillary Clinton have run fairly capable campaigns, each relatively tame in tone by comparison to what’s going on in the Republican race, or even the 2008 primary between Clinton and Barack Obama. The conventional wisdom is that either one would be well-positioned to take on Donald Trump in November.

But Democrats shouldn’t think that facing Trump in the general election would be cakewalk. The billionaire is patching together large parts of the fractured Republican coalition in a way that no other candidate has done since Ronald Reagan. This presents a considerable threat to either Democratic candidate.

Both Clinton and Sanders have well-defined bases, and their campaigns know it. Clinton’s center of support in this cycle has been the South, a stark contrast to her failures there against Obama in 2008. Sanders, on the other hand, is winning states where working class whites make up the biggest portion of the Democratic electorate. This isn’t a rule — Clinton’s wins in Iowa and Massachusetts and Sanders’s in Michigan prove otherwise — but both campaigns know where to focus their efforts.

In contrast, the Republican frontrunner's success has not been so rigidly regional or demographic in nature.

Earlier this week, Trump won three out of four contests in states that look nothing alike. He has won in the reddest states, Mississippi, and he won all 50 delegates in South Carolina a few weeks ago. He’s also won in the bluest states: Massachusetts and Hawaii. He’s won in union states (Michigan) and dominated across the former Confederacy. He’s only placed third in one contest, Minnesota.

You could say this is because the Republican candidates around him have been so feckless and dumb, and you wouldn’t be wrong. Still, his complete domination of the areas that were supposed to be home turf for Ted Cruz, John Kasich, Marco Rubio, and others who already exited the race — Republicans you’d assume would be popular with the base Trump is winning — is something that hasn’t been replicated on the Democratic side.

The pundit class has been apt to compare Trump voters to Reagan voters ever since it became clear that Trump wasn’t going away. It’s a pretty obvious comparison — famous guy storms into the race promising to whip an ineffectual government into shape — if a bit lazy, given that Trump can barely string two coherent sentences together and few establishment Republicans actually want him to be president.

But Trump’s win in Michigan — his first in the Midwest — makes this argument stronger. In Macomb County, where Democratic pollster Stan Greenberg observed that 63 percent of people voted for John F. Kennedy in 1960 and 66 percent for Reagan in 1980, the electorate went 48 percent for Trump, more than twice what the second place finisher there, John Kasich, garnered. Greenberg concluded that the Democrats advantage in Macomb was sealed when Obama won that county by 8 points in 2008, but Trump’s big win there calls it back into question.

It also exposes the weaknesses of the Democratic side of things. Sanders’s win in the Michigan primary is worrisome for Clinton if she’s the nominee, because one reason why he won that race was because of trade, where Trump is arguably more attractive to key demographics than Clinton. And in libertarian-leaning swing states like New Hampshire, where Sanders soundly defeated Clinton, her gun control and racial justice platform could fall on deaf ears with a largely white state.

In the South, Sanders has been absolutely crushed, making it hard for him to keep up with Clinton even when he wins in every other region. Whereas a state like North Carolina could be in play should Clinton win the nomination and face someone like Trump in the general election, it’s likely Sanders would have to concede the South (as has nearly every other Democrat in the modern era) and focus on other states where his message on economic inequality could resonate more loudly.

This isn’t to say that a unified geographical coalition is a guarantee to win the presidency. No matter who the Democratic nominee is, Trump is not winning Massachusetts, nor most of the states that usually go to a Democrat, and his lack of an ideology raises questions about his ability to win purple states like North Carolina or even Georgia, where some Cruz or Rubio voters would perhaps sooner stay home or even vote for Clinton than cast a ballot for a loud billionaire from New York. And even the early polling, so far as it mattersthis far out, favors Democrats: Sanders currently leads in a head-to-head matchup with Trump by an average of 10 points, while Clinton leads by 6.

But this presidential race has been hard to be predict, because it doesn’t follow really any of the measures -- fundraising, establishment support, favorability ratings -- that are normally used. And while the Democrats have two formidable candidates who are growing the party’s turnout with every primary, this unpredictability -- as well as Trump’s Reaganesque ability to unify large swaths of voters who have nothing in common besides anger at both the government and the groups of people Trump is scapegoating for the white working class’s misfortune -- makes it no sure bet that Donald Trump won’t be in the White House next January.