Tay-Sachs couldn't break us: My story of sex, love and grief

Losing a child took so many things away from me and my husband. But we wouldn't let it take this 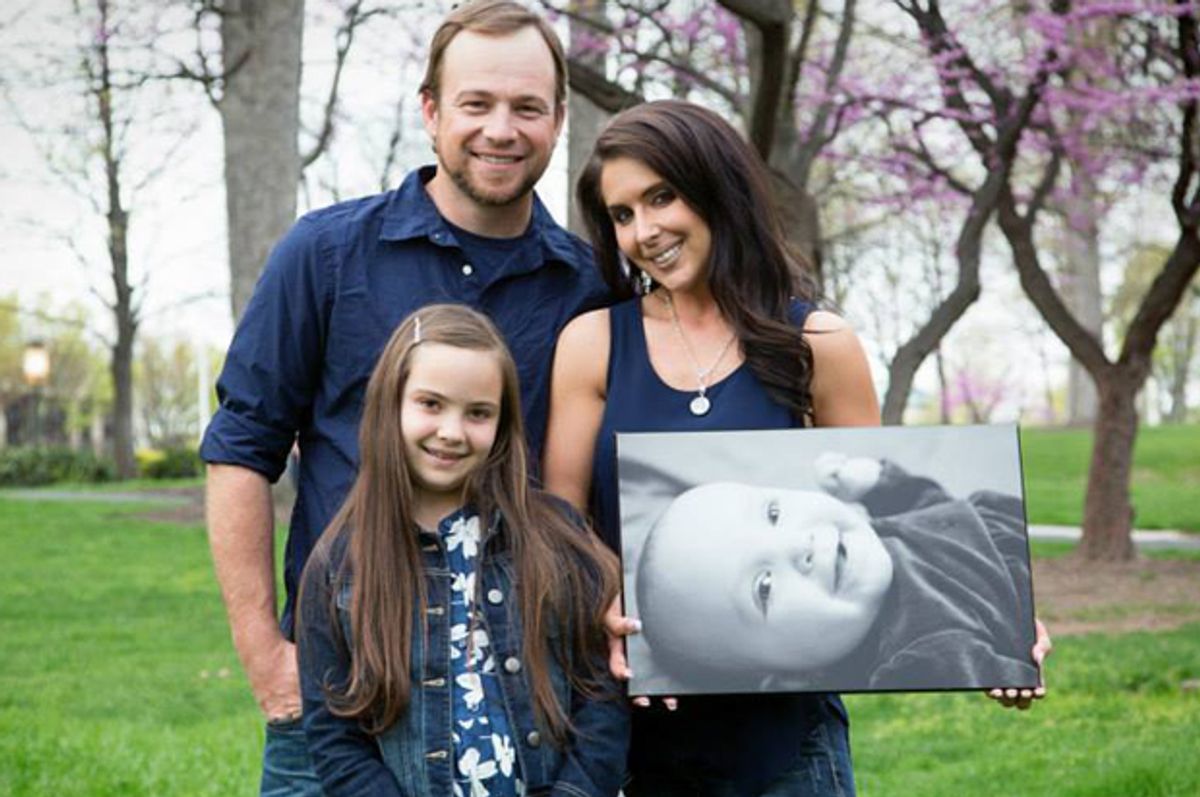 The first time my husband and I had sex with a condom, I thought it was great. Easier, less messy, a change up from the norm. Win-win for me. I didn’t particularly like condoms: the feel, the smell, the timeout in the heat of the moment while fumbling over a loudly crackling wrapper. How romantic. And I’m sure my husband was no fan of them, either, but it did make it better for me once we were done. He’d just pull it off and toss it in the trash. I didn’t have to lie there waiting for him to throw me his T-shirt to clean up with; I could just happily roll over and drift off to sleep.

There was only one problem with this scenario--we weren’t choosing to use condoms; we needed them, which made them feel less like a novelty, a change-up from the norm, and more like a reminder of what we were now facing, and how, in so many ways, our relationship—our sex life--would never be the same.

In 2009, my husband Loren and I had been happily married for six and a half years. Our marriage was loving, committed and stable. We had two beautiful daughters, Skylar, 5, and Miss Elliott, 10 months, when we learned that we were carriers of Tay-Sachs disease. We had no idea this genetic mutation existed in our lineage or that we had passed it on to our youngest daughter, who at this point was beginning to show signs of missing her milestones as she grew. Watching my seemingly healthy infant unable to master age-appropriate tasks such as crawling, holding her bottle, or imitating our speech, I suspected something much more was going on besides the usual variances in development, and unfortunately, I was right.  With no treatment or cure, this neurodegenerative disorder would rob her of all of her physical and mental functioning before finally taking her life at the age of 4.

You might think that when a couple loses a child to a horrible and incurable disease, when a couple must face the excruciating loss of this person they have made and love beyond reason or description, sex simply stops, that sexual connection is not a blip on their radar, let alone even possible in the midst of such grief. And of course, for us, that was the case. When Miss Elliott passed away in 2012, I felt  lost, numb, nothing but a shell of my former self. It was hard to see any future at all, to conceptualize one without her. We didn’t know where to go from there, or even who we were anymore. But gradually, over time, I realized that beneath and above and around this pain was my love for my husband, that this love, far from perishing with our daughter, was still very much alive.

That first time we had sex after her diagnosis, I was full of conflicting emotions. It was awkward, as it had been a full month since we were intimate, the longest period in our relationship. But it was also comforting, being with him, holding each other, sharing an intimacy and sorrow mixed together the way only the two of us could understand. And it scared me to consider the future and the potential consequences of what should have otherwise seemed routine at this point in our lives: sex as a married couple.

We’ve had our share of odds to overcome in our relationship over time; we married young, eloping across state lines. We had career changes, moves across the country, children, deaths in the family, and through it all we remained committed to each other. It may be easy to see many of the outward ways that such circumstances can affect normal daily functioning and add stress to life; new social situations and cultural changes with new jobs in a new state, far away--no friends or family to lean on. And obviously loss, mourning and grief in death, especially when that death is of your own child, can be catastrophic to many couples. Anger, resentment, emptiness, longing: most of these feelings are typical and even to be expected, but sometimes there are situations that remain unseen to the outside world looking in on a grieving couple, situations that are much more private and intimate and only known to those affected by them. In the wake of this earth-shattering loss, we did our best to carry on, to live our lives, to love our family, and to stay connected to one another, all the while feeling physically and emotionally exhausted. We leaned on each other for our strength. And as a result, our desire for both emotional and physical intimacy persisted.

Certainly, my idea of sex and what it means has changed over time. From the spontaneous lustful romps of newlyweds who couldn’t pull each other’s clothes off fast enough, to a purposeful route to procreation, and then to consistency--a consistency to be relied on as time went by. We arrived at a point in our marriage when sex became a touchstone in our relationship, something dependable and known—this was how our sex life evolved. Though sex became routine, it wasn’t mundane. It was comfortable, but still passionate—not just about a physical connection, but a mental and emotional one as well. I’ve never felt safer anywhere than in my husband’s arms.

The idea of having sex after finding out that any and all of our future children could be born terminally ill was extraordinarily difficult, but despite this difficulty, my husband and I were still attracted to each other. We still loved each other, and now the one thing that we should be able to share openly as husband and wife suddenly rocked me to my core. Sex. I desired it, but at the same time, it terrified me. Not the act of sex itself, but the potential outcome. Having sex with my husband meant potential pregnancy that we couldn’t risk, not again, not now knowing that every child we conceived had a 25 percent chance of being affected by Tay-Sachs.

For various reasons, including our moral and religious beliefs, termination was not an option for us. I doubled up on birth control methods to avoid becoming pregnant.

The condoms got old, fast. I didn’t like them, and I’m sure he didn’t. Eventually, one night, we didn’t have any condoms left and so we decided he'd pull out instead. After I came he pulled out and jerked off onto my stomach. It felt sterile, insincere, and not at all like the act of giving yourself to someone through love or connection. This has been our routine for six years now, and I hate it. The desire I have to share this sense of closeness with my husband hasn’t dissipated over time, even as I had to care for our daughter around the clock. She was no longer able to hold her body or head upright, she was losing her eyesight, losing the ability to swallow, and she’d begun having seizures.

Just once, on our first anniversary after our daughter was diagnosed, my husband either forgot, or it happened too quickly and he ejaculated into me. I cried. I bawled nearly inconsolably, ruining our romantic night. I couldn’t conceive of the idea of my body growing and nurturing another child for whom a medieval fate awaited. “How could you do that to me?” I cried, in what still seems an unreasonable fashion. He hadn’t meant to scare me. I knew that. He felt bad. I felt bad. We went back to our method of pulling out and we’ve maintained it ever since. And yet, I miss the way we used to make love. I feel robbed of a form of intimacy that we should be able to share freely as husband and wife.

Losing your child takes away so many things. Feelings of comfort, stability, reason. It’s a struggle to stay present, level-headed, to keep moving forward. It feels like we’re winning just by having a strong marriage that can survive the nuclear explosion of child loss. It feels like winning every time we make love, even now, 13 years into our marriage. Or maybe even more so now because it means we’re carrying on. The idea of pregnancy still terrifies us. The heartbreak of losing our daughter still weighs heavily on every aspect of our lives. It presents itself in expected as well as unexpected ways, often at inconvenient times, but we won’t let it keep us apart.

These days, sex is weightier for us. The stakes were heightened by our genetic condition, but our relationship has grown stronger through the trials. When we consider the potential outcome of every time we’re intimate, we know there’s a risk, but we take our own precautions to manage them as best we can. I know I could get my tubes tied, or he could have a vasectomy, but we resist these measures. I can’t stand the idea of our genetic makeup taking anything more from us. It should be our decision to take such extreme measures to alter our bodies, and not one forced on us because of our genetic near-incompatibility in procreation. It seems so unnatural to permanently sterilize ourselves just because we love each other, to let Tay-Sachs take this other part of us. So for now, we just keep going.

When we make love, we forge a stronger bond; we share a silent sorrow.