There are two Donald Trumps and one is cerebral: Ben Carson explains his endorsement of a man who once compared him to child molesters 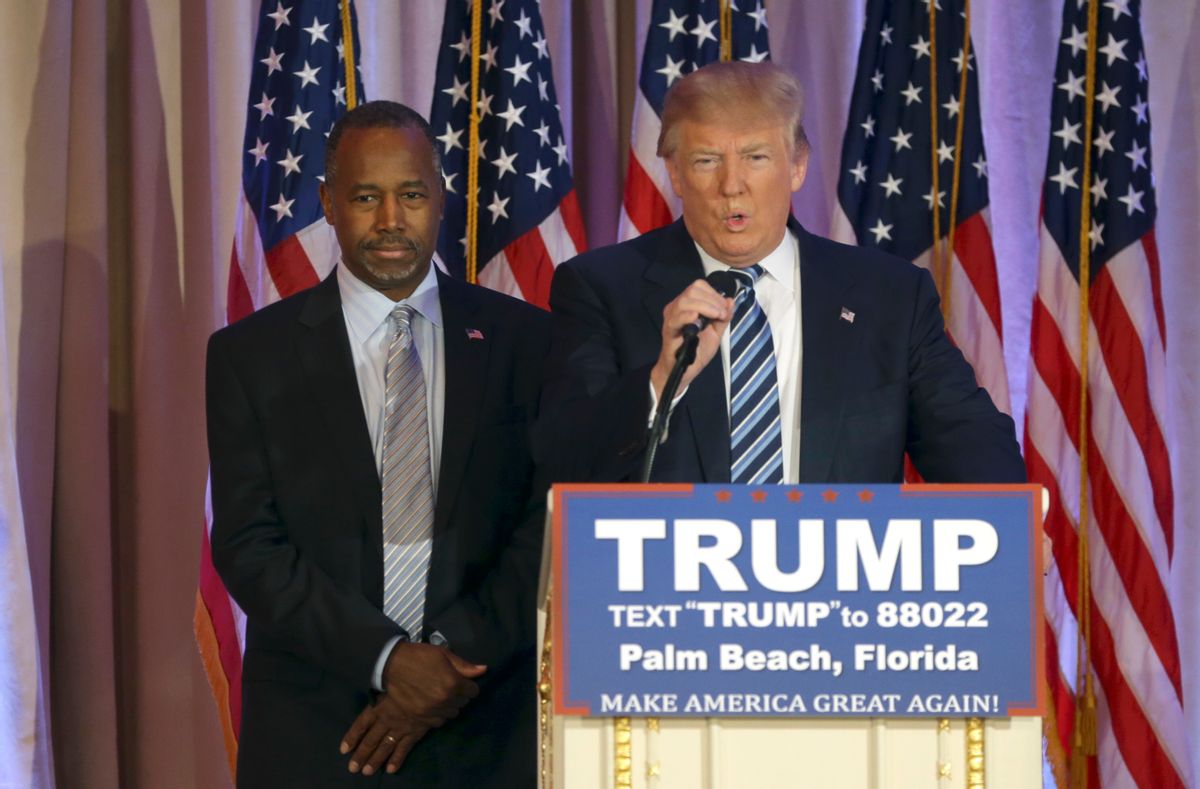 You may have heard by now, either from reports released Thursday or from Donald Trump directly during CNN's debate in Miami, but in less than shocking news, failed presidential candidate Ben Carson has endorsed the Republican presidential frontrunner:

At Trump's Mar-a-Lago Club in Palm Beach, Florida, on Friday, Carson joined Trump for a press conference to announce his endorsement.

"Everybody wanted his endorsement," Trump claimed. "Having his support totally gives credence to what I do," Trump said of the second endorsement he's received from a former rival, recounting that he was the only candidate who gave him a run for his money.

"I was really impressed by the way he fought back," Trump explained, arguing that he only compared Carson to a child molester and questioned his mental stability during the campaign because Carson presented a real challenge in Iowa, according to early polls.

Still, Carson claimed that after leaving the campaign trail he realized that there is "a lot more alignment philosophically and spiritually than I ever thought there was" between the two men.

There are “two different Donald Trumps," Carson explained, echoing comments he made to Fox News' John Gibson on Thursday.

Calling Trump "very cerebral," Carson argued at the press conference Friday that as voters "begin to see the real individual there, I think we’re going to be comforted as a nation."

Trump, of course, compared Carson to child molesters back in November.

While Trump later denied there were actually "two Donald Trumps" he did call himself a great "thinker" and said he was pleased Carson was able to see another side of him.

Carson told reporters that he "absolutely" planned to hit the campaign trail on behalf of Trump, explaining that the two had "buried the hatchet."

Although Carson said that Trump hadn't promised him a spot on the ticket or a specific cabinet position, he said they did discuss Carson "being involved in helping form policies."

Trump indicated that he planned to call on Carson's expertise in the areas of education and healthcare.