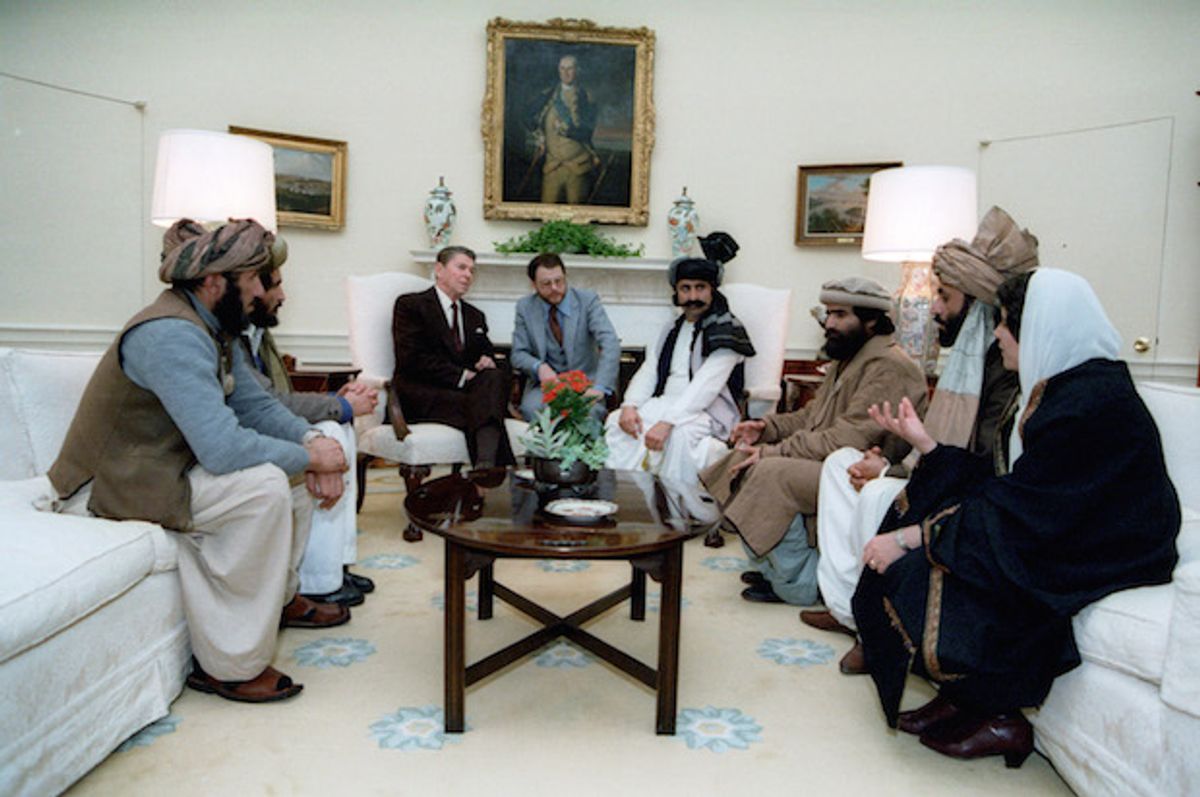 The U.S. State Department announced this week that it has designated two new people as "Specially Designated Global Terrorists" — Abdullah Nowbahar and Abdul Saboor, both of whom are explosive experts for the Afghan extremist group Hezb-e Islami Gulbuddin.

What the State Department did not mention in its announcement is that this group was in fact supported by the U.S. and its ally Pakistan in the 1980s.

In its "Operation Cyclone" program, the CIA funded and armed Islamist extremist militias in Afghanistan, known as the mujahideen. Through Pakistan's Inter-Services Intelligence, or ISI, the CIA helped groups like Hezb-e Islami Gulbuddin fight the Soviet Union, after it intervened at the request of Afghanistan's socialist government in 1978.

"Pakistan insisted the CIA funnel all aid through the ISI. The USA agreed to this arrangement," explains Illinois State University historian Andrew Hartman in a review of U.S. policy. Subsequently, "the ISI allocated most of the weapons and resources to the most extreme fundamentalist groups among the mujahideen."

This was part of the U.S.'s larger Cold War strategy to fight leftist movements throughout the Middle East. President Dwight D. Eisenhower had put it bluntly in the 1950s when he quietly told White House staff "we should do everything possible to stress the 'holy war' aspect."

The Encyclopedia of Terrorism, using an acronym for Hezb-e Islami Gulbuddin, notes "HIG gained significant influence as a result of its active role in resisting the Soviet occupation of Afghanistan during the 1980s."

The Islamist extremist "group benefited from the patronage of Saudi Arabia and the United States and received millions of dollars in financial backing channeled through Pakistan's Inter-Service Intelligence Directorate," the encyclopedia adds.

Peter Chalk, the editor of the 2012 Encyclopedia of Terrorism, is a longtime senior analyst at the RAND Corporation, a renowned U.S.-based global think tank that University of California scholar Chalmers Johnson has described as a key institutional building block of the Cold War American empire" and "the premier think tank for the U.S.'s role as hegemon of the Western world." Chalk, who specializes in the study of extremism, has also authored a U.S. Department of Homeland Security publication.

Hezb-e Islami Gulbuddin is named after Gulbuddin Hekmatyar, an Islamist extremist and Afghan militant leader who was supported by the U.S. and its allies in the Soviet-Afghan War. The CIA knowingly funneled millions of dollars to mujahideen fighters led by fanatics like Hekmatyar, who told his followers to throw acid in the faces of women who did not cover their heads.

The Encyclopedia of Terrorism describes Hekmatyar as "a ruthless leader who has shown no hesitation in using violence to advance his power and the goals of his movement." This did not stop the U.S. and its allies from supporting him in their war against communism, however.

Scholar Andrew Hartman notes that, at the beginning of the Soviet-Afghan War, the U.S.-backed theocratic regime in Saudi Arabia gave Hekmatyar $2 million to fight communists.

The Democratic People's Republic of Afghanistan, the Soviet-aligned socialist government led by the People's Democratic Party of Afghanistan in the late 1970s and '80s, forced men and women to be educated side-by-side. Islamist extremists backed by the U.S., Pakistan and Saudi Arabia considered the co-education of women to be a grievous crime, so, in 1980, Hekmatyar and his fighters bombed a school in Afghanistan's capital Kabul and cut off the head of the teacher in front of the students.

Hartman also recalls how American politicians and their allies heaped praise upon the Afghan militants. President Ronald Reagan called mujahideen "freedom fighters" and even met with them in the Oval Office.

U.S. Secretary of Defense Caspar Weinberger told the mujahideen "I want you to know that you are not alone. You will have our support until you regain the freedom that is rightfully yours."

British Prime Minister Margaret Thatcher condemned the BBC at a 1986 press conference for calling the militants the "Afghan resistance" instead of "freedom fighters."

At least this is what they said publicly; privately, U.S. government officials admitted otherwise. When Hekmatyar's Hezb-e Islami Gulbuddin formed a coalition with six other mujahideen groups, known as the Peshawar Seven, a CIA station chief in Pakistan remarked, "They were all brutal, fierce, bloodthirsty, and basically fundamentalist."

A former U.S. ambassador to Afghanistan also described Hekmatyar as a "nut, an extremist and a very violent man."

After the U.S. and its allies and their proxies forced the Soviet Union out of Afghanistan, a civil war followed in which the various Islamist extremist groups vied for control. Hekmatyar brutally fought for power, and even exercised it at some moments, but eventually fled the country when the rivaled Taliban ultimately came out on top.

After the U.S. invaded Afghanistan, Hekmatyar later returned to the Afghan-Pakistan border region, where the Encyclopedia of Terrorism notes "he aligned himself with the Taliban and took up arms against American and allied NATO forces."

Rumors circulated in mid-2015 that Hekmatyar, still active today, and Hezb-e Islami Gulbuddin had proclaimed support for ISIS. He himself later denied it, but his extremist group has, at various points, already aligned itself with al-Qaida or the Taliban, and is not much different.

In February 2015, the Department of State's Rewards for Justice Program announced that it would pay up to $3 million for information on Abdul Saboor and up to $2 million on Abdullah Nowbahar, the Hezb-e Islami Gulbuddin bomb experts the department just designated as terrorists.

Nowbahar and Saboor partook in a Sep. 18, 2012 attack on a bus carrying foreign employees of Kabul International Airport that killed 12 people, the State Department notes. Saboor was also involved in a May 2013 suicide attack in Kabul that killed two soldiers, four U.S. civilian contractors and eight Afghans.

"As a result of these designations, all property subject to U.S. jurisdiction in which Abdullah Nowbahar and Abdul Saboor have any interest is blocked and U.S. persons are prohibited from engaging in any transactions with Nowbahar and Saboor," the U.S. government writes in its announcement.

"The imposition of sanctions by the United States against terrorists is a powerful tool. Today's actions put the U.S. public and the international community on notice that Abdullah Nowbahar and Abdul Saboor are actively engaged in terrorism. Designations of terrorist individuals and groups expose and isolate organizations and individuals, and result in denial of access to the U.S. financial system," adds the U.S. government — which knowingly bankrolled their extremist group Hezb-e Islami Gulbuddin just three decades ago.

My, how times have changed.