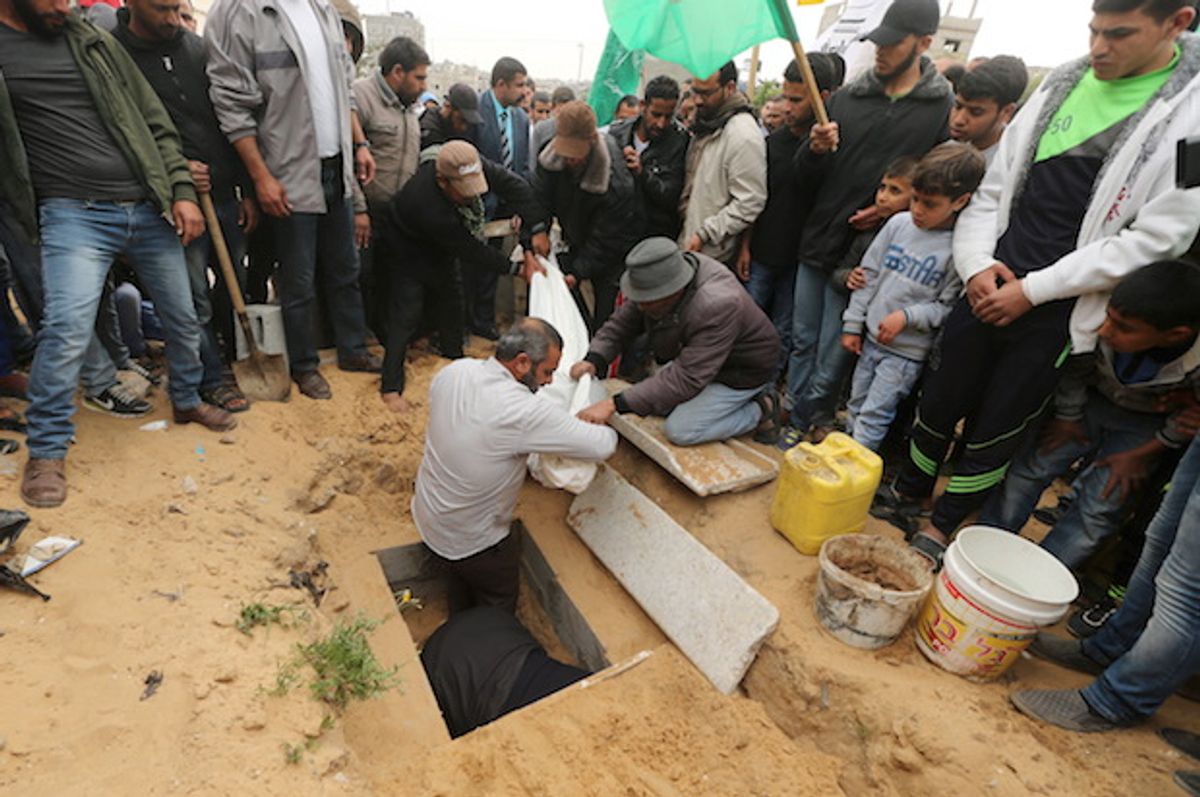 Mourners bury the body of 10-year-old Palestinian boy Yassin Abu Khoussa, who was killed by an Israeli airstrike in northern Gaza on March 12, 2016 (Reuters/Mohammed Salem)
--

Yassin died after an Israeli plane bombed their home. Israa was seriously wounded in the attack, and later died in the hospital.

The Israeli government says it was targeting training camps for the Palestinian political party Hamas, and that the children's home was next to one of these camps.

Israel claims its airstrikes were in retaliation after four missiles were launched into open areas in southern Israel, resulting in no casualties. However, Israeli Defense Minister Moshe Yaalon also admitted that rogue militant groups were responsible for the rockets, not Hamas leadership, even though it was Hamas infrastructure that the Israeli military targeted.

The Israeli military says there have been three more rockets fired into Israel from Gaza since the beginning of the year, which neither injured nor killed anyone.

In its 51-day war in July and August 2014, the Israeli military killed more than 2,250 Palestinians, around two-thirds of whom were civilians, including more than 550 children, according to the U.N. On the other side, 66 Israeli soldiers were killed, along with six civilians. 92 percent of those killed by Palestinian militants were soldiers.

Almost 18 months after the war, reconstruction or repair of the homes of 74 percent of Palestinian families who were displaced had not even begun, according to the U.N., with more than 16,000 families — roughly 90,000 Palestinians — displaced or homeless.

Violence for Palestinians living under illegal military occupation in the West Bank or under de facto occupation in Gaza is a part of everyday life. In the past few months, nevertheless, this violence has skyrocketed.

Approximately 190 Palestinians and 30 Israelis have been killed since October 2015. Close to 30 Palestinians were killed by Israeli forces in Gaza.

In October 2015, Israel also bombed a home in southern Gaza City, killing a pregnant Palestinian woman and her two-year-old child. Reuters' report did mention that there were casualties in this attack, but did not acknowledge that the Israeli military had killed a Palestinian baby and her pregnant mother.

Neither Reuters nor AFP mentioned the almost decade-long Israeli blockade of Gaza in their reports on the Israeli airstrikes.

After Hamas was democratically elected in 2006, Israel worked with the Palestinian Authority to attempt to prevent it from consolidating power. The U.S. even plotted a violent coup to overthrow the Palestinians' elected government.

Since this time, Israel has besieged Gaza. The Israeli government controls virtually everything that enters the densely populated strip, and has put Gazans "on a diet," restricting the food allowed in.

U.N. rights experts have said since 2011 that Israel's siege of Gaza is illegal.

A U.S. government cable released by WikiLeaks quotes Israeli officials admitting that the blockade keeps the Gazan economy "functioning at the lowest level possible consistent with avoiding a humanitarian crisis."

Israeli government officials told the U.S. that they are pursuing policies to "keep Gaza's economy on the brink of collapse."