Sorry, Sacha Baron Cohen, AIDS is no joke even when it's Donald Trump who gets it 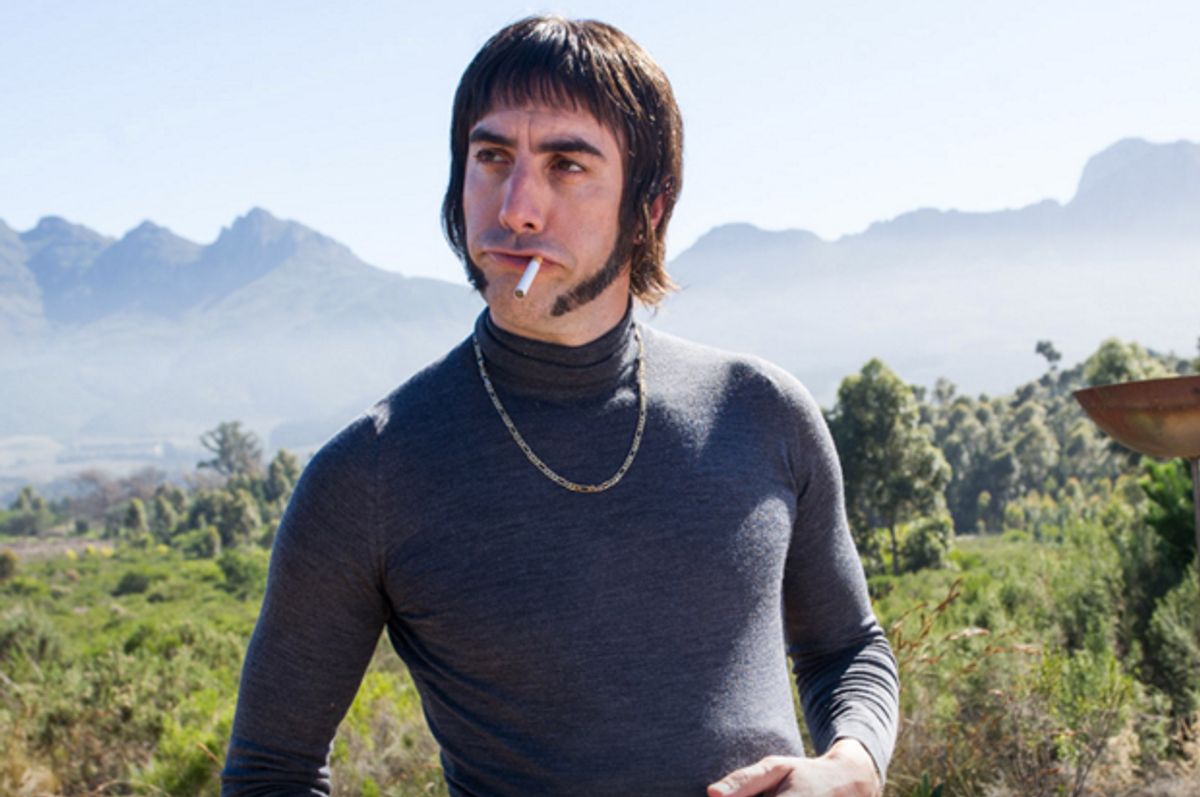 Sacha Baron Cohen is catching heat for a joke in his new film, “The Brothers Grimsby,” in which Donald Trump gets “full-blown AIDS,” but the comic thinks you should stand up and cheer. “We’ve just shown the movie in Germany, Holland, England, around America, Norway, Spain—and when Donald Trump contracts HIV, people are standing up and applauding,” Cohen told Entertainment Weekly’s SiriusXM radio station. According to the 44-year-old, best known for playing the title character in 2006’s “Borat,” Sony fought him to take out the joke—or at least put in a disclaimer. He should have listened.

But the controversy appears to have missed the point: The real issue is not that Sacha Baron Cohen has attacked the widely hated Republican front-runner—noted for his racist views on Latinos and proposal to expel Muslims from the U.S.—but that the joke is a hideous throwback to the worst of 1980s HIV panic. That was a time which the virus was deemed a “punishment” for those who contracted it. Back in 1992, a little more than two decades ago, 36 percent of Americans told Gallup that HIV was a tool of God’s wrath, his own personal divine condemnation.

Today, about one in 10 still believe HIV is a punishment for immoral behavior. This seems like a small number but it isn’t, really—and that minority is incredibly vocal. According to Gallup, these populations include white evangelicals, Latino Catholics, and black Protestants. Two years ago, “Duck Dynasty” star Phil Robertson famously told the Family Research Council’s Tony Perkins: “Now to me either it’s the wildest coincidence ever that horrible diseases follow immoral conduct, or it’s God saying, ‘There’s a penalty for that kind of conduct.’ I’m leanin’ toward there’s a penalty toward it.’” You might think he’s just a dumb redneck, but he’s one with a huge platform: At its peak, “Duck Dynasty” shattered cable ratings records.

If the number of Americans who agree with Phil Robertson’s sentiments has shrunk in the past 20 years, that doesn’t mean society has reached a point of tolerance and understanding when it comes to those living with HIV. That same Gallup poll—conducted in 2014—showed that nearly two-thirds of respondents believed infections were caused by “irresponsible behavior.” That means that even if they didn’t believe HIV was God’s punishment, a majority of Americans still felt it was payback for individuals’ choices.

A 2011 report from the Henry J. Kaiser Family Foundation further showed that HIV stigma is alive and well. The group surveyed 2,583 respondents about their beliefs and prejudices in regards to people living with HIV, finding that “substantial shares of Americans continue to express discomfort at the idea of interacting with people living with HIV.” The results aren’t pretty: “45 percent say they’d be uncomfortable having their food prepared by someone who is HIV-positive, 36 percent with having an HIV-positive roommate, 29 percent having their child in a classroom with an HIV-positive teacher, and 18 percent working with someone with HIV.”

Last year, these myriad biases reared their ugly head when former “Two and a Half Men” star Charlie Sheen announced that he was HIV positive in an interview with Matt Lauer. But he didn’t come out willingly: He was forced out of the closet by blackmail, as he told Lauer that former partners were currently extorting him for money, threatening to reveal his status. In addition, news outlets like the National Enquirer had promised a juicy expose on “Charlie Sheen's AIDS Cover-Up,” as if his own right to privacy on the subject were somehow nefarious.

In a similar story from RadarOnline, the outlet links Sheen’s status to his history with substance abuse and excessive lifestyle—right in the story’s lede. “Sex maniac Charlie Sheen not only bedded porn stars, groupies, call girls and strippers—he also slept with transsexuals and men!” RadarOnline further describes the “Caligula”-like scenario that allegedly led to his infection—one filled with “sex swap escorts and gay lovers.” “He’s had sex partners of all kind," an anonymous source claimed. “He’d regularly spent thousands of dollars to sleep with transsexual hookers who he would hire and have them service him at his Mulholland Estate mansion.”

Sheen’s disclosure came almost 25 years after former NBA star Magic Johnson helped put a face on the disease and humanize it for many Americans. In 1991, Johnson came out as HIV positive in a speech announcing his retirement from professional basketball. “[L]ife is going to go on for me, and I'm going to be a happy man,” he said. But it seems that many are still having difficulty viewing those who are HIV positive as anything but a disease—or somehow morally suspect. When learning of Sheen’s status, actress Jenny McCarthy (who guest starred on “Two and a Half Men”) simply said: “Ick!”

As both Phil Robertson’s comments and the RadarOnline story show, this is largely due to the perceived linkage between homosexuality and the spread of HIV. After all, classic film icon Rock Hudson became the first well-known celebrity to die from the disease, after he passed away suddenly in 1985, and his death generated considerable hysteria in the media. The National Enquirer noted that his “Dynasty” co-stars were terrified that he might have given them HIV, particularly Linda Evans. “He kissed her on the show!” the mag noted.

But in addition to treating Hudson’s HIV status as gross, he was also widely mocked for it, made into a national punch line. If you were alive in the '80s, you might have even heard a couple of Rock Hudson jokes. For instance:

Q: “Why was Rock Hudson's car insurance so high?” A: “Because he got rammed in the rear too many times!”

Q: “Do you know what the doctors told Rock Hudson?” A: “Don't worry, we'll have you back on your knees in no time.”

Q: “Did you hear they found out Rock Hudson doesn't have AIDS, he has food poisoning?” A: “He ate a bad weenie.”

Other jokes spread at the time quipped that the AIDS acronym actually stood for one of a number of things, depending on which version of the joke you heard. The answers included: “Already Infected Dick Sucker,” “Adios, Infected Dick Sucker,” and “Another Infected Dick Sucker.” If these are new to you, they shouldn’t be all that surprising. A year before Hudson’s death, the president of American Airlines told attendees at a Republican National Convention breakfast that “gay” stood for “Got AIDS Yet?”

These might seem like harmless jokes, but they are widely reflective of real-world discrimination against people living with HIV. As BuzzFeed’s Chris Geidner noted, Rock Hudson’s longtime friend Nancy Reagan refused to grant Hudson a transfer to a military hospital in France that would offer him treatment, as the 59-year-old was ailing on his deathbed. After Hudson first collapsed at the Paris Ritz, he would die just 10 days later. Instead of getting involved, a White House spokesman said that the first couple sent him their best: “President Reagan wished him well and let him know that he and Mrs. Reagan were keeping him in their thoughts and prayers.” Reagan wouldn’t even say the word “AIDS” publicly for another two years.

In some ways, we’ve come a long way since the Reagan era: Today, people living with HIV are a protected class under the Americans With Disabilities Act, which grants them equal access to public accommodations and prohibits discrimination on the basis of status. But as the U.N. noted in a 2015 report, people living with HIV continue to be denied healthcare and other services: 1-in-8 HIV-positive individuals aren't getting the care they need based on lingering prejudice. In addition, these people may be expelled from their communities and families.

These populations aren’t just being ridiculed and shunned from their communities because of pervasive stigma—or even left to die. In the United States, they’re also criminalized. Currently, 24 states have laws on the books that force the HIV positive to disclose their status to partners—or risk possible jail time. In 2015, a former wrestler at the University of Missouri, Michael Johnson, was sentenced to 30.5 years in prison for lack of disclosure. In the Guardian, Zach Stafford wrote that the “Class A felony that Johnson was convicted under makes exposing a person to HIV the same as murder or child abandonment resulting in death.”

If folks like Phil Robertson believe that HIV is a punishment, clearly our justice system is doing little to disabuse Americans of that notion. Currently, there are around 1.2 million Americans living with HIV, and an estimated 1 in 10 don’t know that they’re positive. Nearly a majority (46 percent) of those between the ages of 18 and 64 have never been tested at all—likely due to the low premium our abstinence-only culture places on sexual health, education or prevention. Our sex-negative culture creates folks like Michael Johnson and then locks them away for it.

While Sacha Baron Cohen might see himself as a comedy hero for speaking truth to power, his offensive jabs at Donald Trump only reinforce these damaging notions of who contracts HIV, why they become positive, and how we should treat them. Who gets HIV? If you listen to Phil Robertson, it’s gays and moral degenerates, dancing while God rains fire on them. If you listen to RadarOnline, it’s lowlife scum involved in risky, unsafe behaviors. And if you listen to Cohen, it’s the most horrible, hideous human being imaginable: America’s potential megalomaniac in chief.

However, no one—not even Donald Trump—deserves HIV. And those who do live with the disease should have their lives treated with greater dignity and respect. Thirty years after Rock Hudson’s death, it’s getting better for people living with HIV all over the world: In 2016, they have access to lifesaving medications like Truvada, which were denied to previous generations. But when it comes to creating a society free of HIV shame or stigma, we clearly have a long way to go.