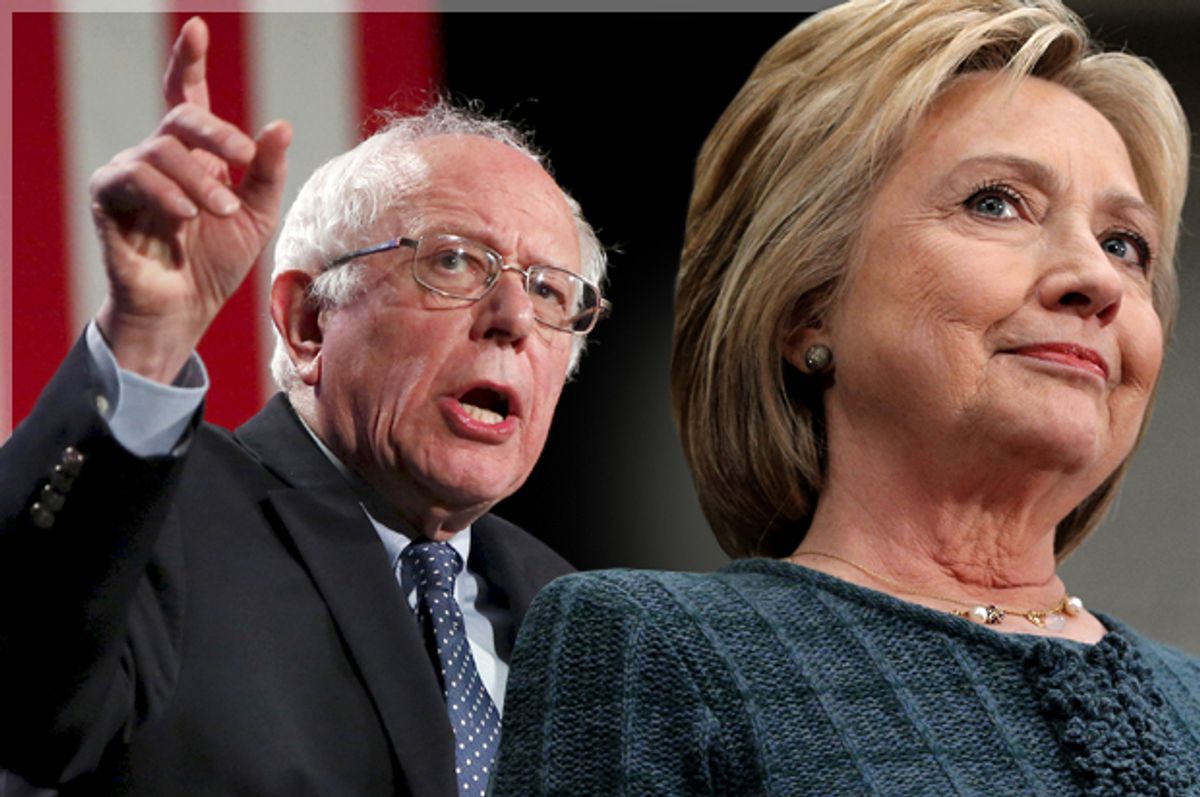 Nothing this primary season in the Democratic presidential race will come close to the sheer lunacy of behavior transpiring in a Republican Party on the verge of self-implosion. But unfortunately, in the non-Trump dominated side of the U.S. political world there also has been some alarming behavior on the left that can’t be ignored. And while Hillary Clinton has received the usual share of sexist and misogynistic comments, it has been Bernie Sanders and, in particular, his supporters who have endured a lot of ridiculous things.

The constant drumbeat of “Bernie’s plans aren’t realistic,” “Bernie’s plans aren’t passable” and the “BernieBro” have reached their own level of online fame. Although all three of those have their own major flaws, a discussion has been made extensively about them that has created sustained negatives around the septuagenarian candidate and his fans.

One key aspect that has been bubbling for a while now, spun off from the BernieBro label and not discussed like it needs to be, is the opponents or most acerbic critics of Sanders, intentionally or unintentionally, implying that his supporters have no noticeable racial diversity or that his campaign doesn't appeal to minority voters.

What’s so troubling about this enduring narrative is the disturbing insistence on completely ignoring or aggressively dismissing any of Bernie’s minority supporters who aren’t famous. It’s a focused and determined echo on painting Sanders as truly representing only young or old white liberals, and that Sanders and his backers are unable to acknowledge or express white systemic privilege. And in either their strong support for Clinton or their unwillingness to fully analyze Sanders fairly or comprehensively on race, one of this election’s deleterious aspects on the left can no longer be dismissed.

The toxicity of the “Bernie is white and for whites only” drive has become even more glaring over the last month, with cleverly crafted smears at Sanders hitting exactly the sustained narrative they wanted to hit and fueled by Clinton’s legacy domination of the black vote.

The Congressional Black Caucus’s expected public endorsement of the former secretary of state was guaranteed more headlines when civil rights icon and Georgia House Representative John Lewis provided himself, whether he meant it or not, as a useful foil in creating more negative news for Sanders on race. Lewis’s “I never saw him” quote in response to being asked if he knew of the Vermont senator during the Civil Rights era elevated the narrative, from online and in general, that Sanders not only is unfamiliar in black circles, but he also could be viewed as a possible race fraud. It was the ideal moment for Hillary supporters and anti-Bernie critics on the left to be in uncontrolled glee over a figure like Lewis, intentionally or unintentionally, humiliating Sanders.

If that display was predictable but gross enough, Lewis’ comments (he later backtracked on his statement to say that he wasn’t disparaging Sanders and that he literally just meant that he didn’t see him or know about him that day or in that period) and the CBC’s stern rejection of Sanders in favor of Hillary looked classy compared to the shameful tag-team reaction of actress America Ferrera and Hispanic labor icon Dolores Huerta to Sanders and his supporters at the Nevada caucus.

In representing Hillary, both Ferrera and Huerta couldn’t have manufactured a better way to again place Sanders and his white supporters in that odious bind of being unable to properly handle any issues of race. When Ferrera tweeted that Huerta was heckled with “English Only” chants by Bernie voters not pleased with her voluntary translations into Spanish, which was followed by Huerta making a rare appearance herself on Twitter to confirm the incident, it looked like the perfect sign to paint some of Bernie’s white supporters as racist and continue the narrative that everything about his campaign was a race disaster.

Except it was either a lie, or an embarrassing, alarming version devoid of any of the facts that came from video evidence.

Actress and Sanders supporter Susan Sarandon was able to lead the chorus against a story that Sanders' online supporters were visibly alarmed by, only to be made incredulous by all the recorded video of the incident showing nothing of what Ferrera and Huerta strongly claimed. Surely someone, whether Ferrera or anyone else, would have gotten their phones out to clearly show unruly Sanders supporters saying “English only” to a historic farm labor figure like Huerta, especially on a pivotal election day, right? But the videos showed that Sanders supporters were asking for equal fairness and actually yelled the word “Neutral” so that Huerta, a Clinton ally, would be fair to both sides.

But the narrative of Sanders and his supporters failing on race again (and continuing that narrative by solely thinking about his majority white supporters and not his minority supporters) had already gotten out. Think Progress and BuzzFeed were among many spreading Ferrera and Huerta’s claims as being prominent without issuing strong updates to categorically dismiss their original headlines. And despite those videos showing that there was nothing confirming Ferrera and Huerta’s accusations, there was no apology whatsoever from either woman. Ferrera didn’t respond to Sarandon kindly challenging her shoddy story as the star went on a Twitter silence for hours before reappearing to live tweet about her new NBC show airing its latest episode. Huerta reverted to her normal sparse activity on Twitter, not tweeting for almost a week after her direct attack on Sanders before re-tweeting a President Obama Supreme Court vacancy tweet. Neither Ferrera or Huerta have since addressed that event, acting like it never existed.

It’s already bad enough when fellow Congressional colleagues and high-profile supporters of your more established opponent use hideous tricks to paint you negativity. Prominent South Carolina Rep. James Clyburn’s smearing of Sanders (after he decided against staying neutral for his state’s primary and backed Clinton to help her massive landslide in the state get even larger) for his “free” college plan by wildly claiming that it would hurt private black HBCUs (it would not) was another clever politician-driven race attack on the democratic socialist.

But the smears are even worse when supposedly neutral media figures participate in demonizing your campaign. It already has occurred with some professional-media feminists trying to find ways to paint Bernie as hapless on women’s issues despite his emphatic defense of those vital issues throughout his career, as well as imploring those to not even dare be skeptical of Huerta’s wild claims.

And it came in shameful abundance in the aftermath of Clinton’s South Carolina blowout win over Sanders. MTV writer Jamil Smith, among some notable black writers who would probably even slam Sanders if he misquoted a Marvin Gaye or Beyoncé song wrong, conveniently cherry-picked a Sanders speech in Minnesota after his heavy South Carolina loss to give the impression once again that Sanders, his campaign, or his overall group of supporters lack any diverse soul whatsoever. In Bernie’s lengthy 50-minute monologue, Smith decided to just select a 10-second part of the speech in which Sanders told the mostly young, white crowd, “There’s no way we are going to lose Minnesota, I can see that you are just too smart,” as something Sanders should not have said. After being in disbelief that Sanders “hardly reached out to black voters” after being blown out in South Carolina, Smith captioned Sanders’ compliments to his crowd as “This just isn’t smart.”

Smith basically wanted it to seem, or at least leave open the idea, that Sanders was demonizing South Carolina's black voters for overwhelmingly going for Clinton and cleverly implying that his Minnesota supporters at the rally, mostly white but with some noticeable diversity, were smarter than them. Amazingly fitting, Smith didn’t care to dive deeply into the full context of the Sanders quote, as it came on the heels of Sanders praising those at the rally who knew the answer to his standard question of what was the average total of his supporters’ campaign donations. “Twenty-seven dollars!” they yelled back at Sanders before they all laughed together before his “you’re too smart” Minnesota quote.

When called out for his interesting array of tweets that would leave the impression that Sanders passively insulted black voters, Smith predictably hid behind the wall of the vague “I didn’t specifically say that, so you can’t prove it” response, giving off some level of guilt. “The Sanders ‘too smart’ bit, especially after the SC loss, was a bad look,” Smith tweet chided. “But folks, if I wanted to call him ‘racist,’ I’d have done that.”

It’s the type of behavior toward Sanders in racial situations that has been too hideous to observe and not speak out on. It continued on Super Tuesday, where piece after piece describing his four state wins consisted of saying that only white voters back him. That cliché narrative would have been easily true for those writers had it not been for the fact that Sanders won Colorado over Clinton by winning a large number of Latino voters. Although there was no exit polling for the Colorado caucuses, Sanders did win 10 of the 15 top Latino counties in Colorado by wide margins. Funny how that was excluded from most reviews of Sanders’ Super Tuesday victories, especially considering that Colorado produced record turnout at its caucus thanks to the enthusiastic support for Sanders there.

Relentlessly painting Sanders as only having white supporters will continue a dangerous practice of misinformation and cavalier smearing. It would make it seem that no minority voters like him, or don’t believe or accept the actual substance of Sanders’ plans, or believe in his policies galvanizing the masses to either make Republicans and “Republican acting” Democrats vote for those policies or vote them out of office. And it would make it appear as if all minorities are chastising or eagerly humiliating Sanders and his supporters every chance they get, for legitimate or illegitimate reasons.

Make no mistake, Sanders truly does not just have white supporters. He continues to not only get growing support among Latino voters, but even after the Southern-state shellacking he has taken over the last week, thanks to Clinton thrashing him in the black vote, Sanders is beginning to appeal more and more to black supporters. He’ll never come close to narrowing the gap by any respectable margin, but he needs all the narrowing he can get there. Just like any other Democratic demographic, black voters who weren’t familiar with Sanders to begin with really like him once they get familiar with his background and the anti-elite policies he continues to advocate for. And many of them are being more and more vociferous at those quickly trying to erase them and constantly reverberate their “Bernie so white, he’s only for white” dishonest or ill-informed discourse.

Those unfair, race smearing practices thrown on Sanders and his supporters will sadly continue as he rightly holds the belief that he can still win the Democratic nomination and continues growing his appeal among minority voters in states more favorable to him. And they will only become uglier than the unfortunate words and actions we have already seen.

We already have the nutty party trying to erupt itself. But that doesn’t mean we stop calling out ugly smears that occur on the rational side of politics as well.

Andrew Jones's work has been published by Talking Points Memo, The Guardian, The Intercept, The Raw Story, Ebony Magazine and The Grio, among other publications