Conservatives are resisting a hate-crime bill in Ohio. Here's why that bill is so necessary

One in 6 members of the LGBT community report being victims of a hate crime, yet in some states it isn't recognized 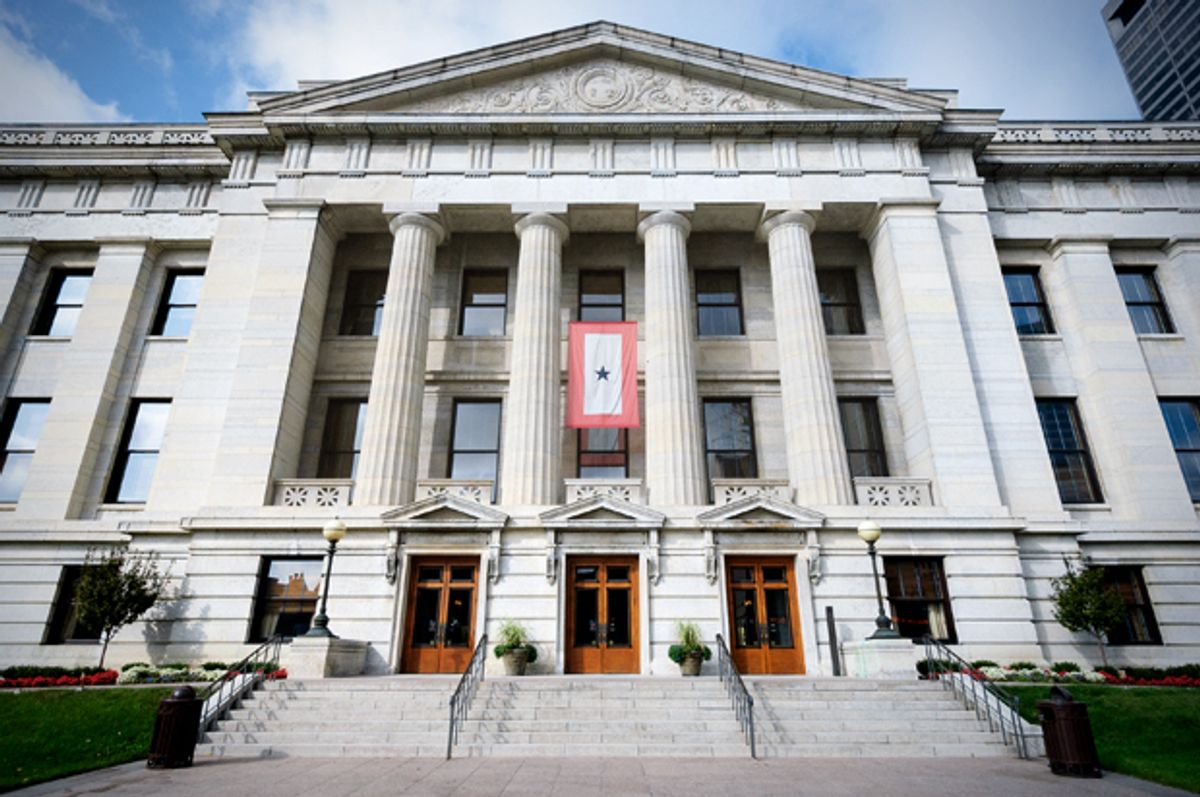 The Ohio Statehouse in Columbus, OH. (Zack Frank via Shutterstock)
--

According to a Columbus Dispatch report from January, the Buckeye State faces an uphill battle to adding gender identity and sexual orientation to statewide hate crime ordinances, as Ohio is one of just 13 states that doesn’t offer LGBT-specific protections. “[L]egislation to include nondiscrimination protections has been introduced in the state legislature every year for the past 10 years, and more than 70 percent of Ohioans think the law already exists,” the Dispatch’s Dina Berliner writes.

Conservative groups like the Citizens for Community Values argue that if Ohioans think they already exist, that’s because LGBT-specific hate crime laws aren’t necessary. “Homosexuals have a right to coexist with everyone else … the laws are equal; we’re already equal, so that’s why we call these special rights,” CCV’s Phil Burress told the Dispatch.

But the problem is that LGBT people are far from equal. Although last year’s Supreme Court ruling was a huge step forward for same-sex couples, who can now wed in all 50 states, equal marriage is very different than equality for everyone. In 2016, LGBT Americans are disproportionately likely to be live in poverty—partially due to widespread employment discrimination. According to the American Civil Liberties Union, workers can still be legally fired in 28 states on the basis of their sexual orientation or gender identity.

Although the Southern Poverty Law Center found that the rate of hate crimes against LGBT people has fallen over the past decade, queer and trans people continue to face high rates of violence. A separate survey from the Holocaust Memorial Day Trust showed that over the past year, nearly 1 in 6 queer folks report being the victim of a hate crime. This is a problem that marriage equality will never address.

Last year, trans people were killed in record numbers in the U.S., and according to a Huffington Post report, nearly 50 percent of those murdered were trans women of color. These were women like India Clarke, Ashton O’Hara, and Penny Proud, a 21-year-old who became a national trending topic after she was gunned down during a robbery attempt on February 10, 2015. The #MakePennyProud hashtag not only shined a light on the type of tragic crime too often ignored by the mainstream media; the conversation also sent an important message: It’s not getting better for everyone.

All of these cases were outside of Ohio, but the Buckeye State is hardly immune to violence against trans people. Last year, 22-year-old Bri Golec was allegedly stabbed to death by Kevin Golec, the victim’s father. According to reports, Mr. Golec told the police that cult leaders broke into their home and killed “his son.” “These guys came in and I fought them off,” Golec said during the initial 911 call. “They got him. They got me.”

This horrific incident is just the tip of the iceberg: In 2013, two transgender women—Brittany Stergis, 22, and Betty Skinner, 52—were killed within days of each other in Cleveland. Skinner was disabled and lived in a housing unit for the elderly. She was found murdered in her bed. The city’s police argued that these were “crimes of hate” but couldn’t pursue them because trans people aren’t included in Ohio’s definition of hate-crime victims.

An inclusive hate crime law covering gender identity and sexual orientation would be a necessary step forward in preventing these continued slayings—both in the Buckeye State and across the U.S. Passed by Congress in 2009, the Matthew Shepard and James Byrd, Jr. Hate Crimes Prevention Act recognized that specific marginalized populations continue to be at risk for harm. After all, hate crimes aren’t just an attack on an individual but an entire community.

Last September, a gunman shot up a gym in Columbus because it employed too many gay people.

Preventing such attacks not only requires the engagement of local police forces but a coordinated, timely response, one that includes federal involvement. One of the things that makes hate crime legislation so valuable is that it impels the aid of federal prosecutors.

“Today, in the midst of our economic downturn, federal authorities are needed much more to assist cash-strapped local departments, not as an unwelcome occupying force, but as a desperately needed partner to assist with forensics, technical assistance and investigations,” wrote Brian Levin and Jack McDevitt in a CNN editorial back in 2008.

America’s economic situation has improved since then, but its treatment of queer people in many ways has not.

Hate crimes, however, are an imperfect solution to these issues. Progressive advocacy organizations like New York’s Sylvia Rivera Law Project don’t support these measures because hate crime statutes tend to disproportionately target people of color. As The Nation reports, the issue is “penalty enhancement,” as those charged with a hate crime risk far harsher punishment. This leads to longer jail sentences and a higher risk of recidivism. In addition, there’s question about how effective hate-crime laws are at deterring violence.

Instead, what these advocates suggest is championing bottom-up, grassroots efforts that promote the understanding of queer and transgender people—leading through education, not the prison system. As The Nation reports, there are already groups that are already engaging in this crucial on-the-ground work—including FIERCE, an NYC-based youth organization that fosters future leadership among teens of color.

I believe that the answer is somewhere in the middle. For decades, law enforcement has failed LGBT groups, and our legislation drastically needs to change how we protect the most marginalized populations in American society (without further marginalizing other disadvantaged groups). In addition, the rest of us have important work to do in making society safer for women like Penny Proud and Brittany Stergis by furthering awareness in our own communities.

No one is asking for “special rights.” All any queer or transgender person wants is to live life without the fear that our friends and loved ones might be next. If we want to make these women proud, let’s make sure no one has to become another hashtag.