Stop threatening to move to Canada: or at least learn these things before you do

Liberal Americans like to view Canada as their own, personal bolthole. Guess what: it's a whole different country 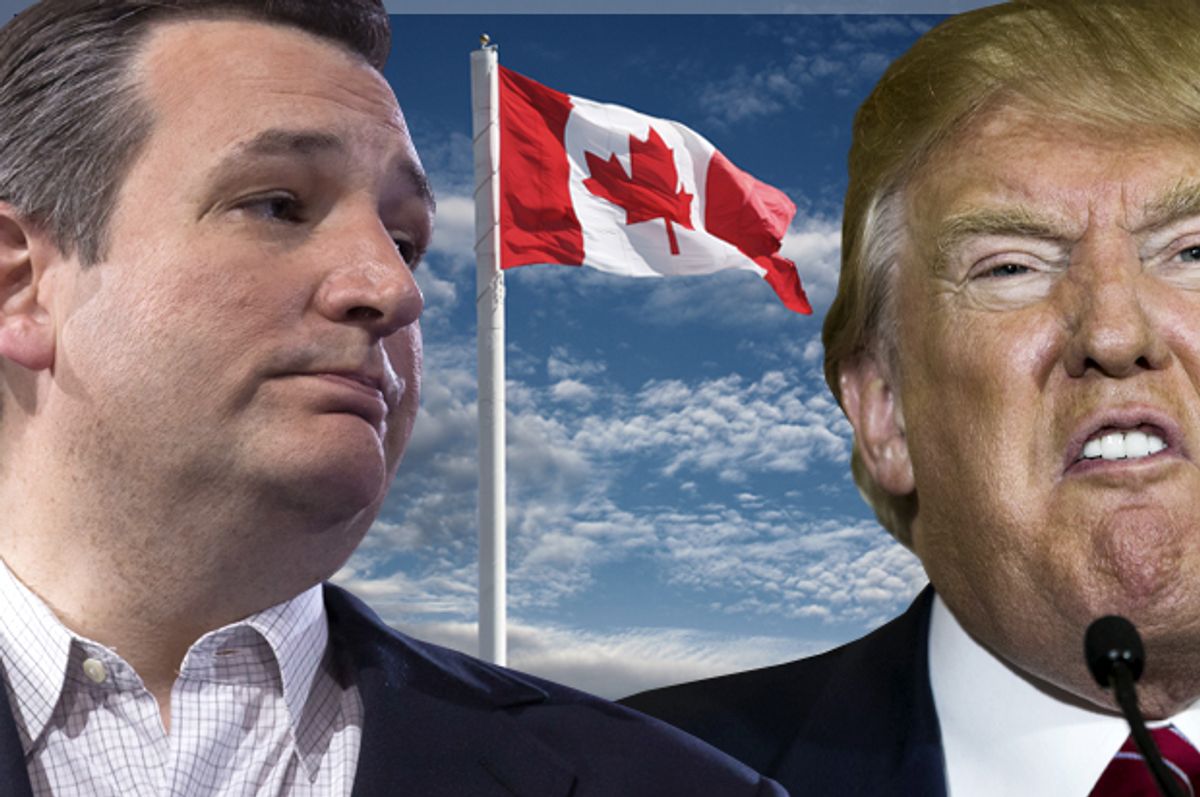 If the growing prospect of President Trump scares the shit out of you, Canada might be looking like a nice cozy bolthole right about now. But it’s not just a kinder, gentler U.S. with better hockey and beer.

Hey, it’s close, civilized, a quick flight from the Northeast. They speak English.

But it really is a foreign country.

A nation almost 100 years younger than the U.S., Confederation was in 1867, creating the first four provinces. For all its vaunted socially liberal policies, it’s also a country with its own history of submission and domination – English over French, the 150,000 First Nations, Metis and Inuit children forced for decades to attend brutal residential schools, the unresolved murders of 1,200 indigenous women, prompting the recent allocation of $100 million by Ontario Premier Kathleen Wynne to investigate and address the issue.

While Canada recently welcomed 25,000 Syrian refugees, don’t be too quick to assume there’s an equal welcome for thousands of panicked Americans eager to flee a political scene they find abhorrent.

Read the Canadian government website for potential immigrants and you’ll find a list of exclusions, from health and financial problems to a DUI conviction. Yes, some of you will be able to obtain work visas, but many Canadian jobs pay less than you’re used to – and taxes are higher. You’ll also wait longer for access to some medical care.

Before assuming Canada is a default lifetsyle option, read its newspapers and listen to the CBC. Read our history and some of our authors, not just the ones you know, like Margaret Atwood or Alice Munro. Talk to people who live there. In other words, before you reassure yourself that if it comes to a Trump inauguration, you can pack your bags and head to Vancouver (maybe not Vancouver – CRAZY expensive to live there), you might want to take a minute to acquaint yourself with some specific attributes of that country to the north:

Culture: You probably know that Bieber and Drake are Canadian. Maybe Joni Mitchell, Neil Young, Arcade Fire. Crossing the border can be disorienting since so much of the media Canadians consume is American. But, thanks to strong public policy and government incentives, some mandating the use of Canadian talent in the production of film, music and journalism, to name three, Canadian culture thrives despite the Niagara of incoming material from elsewhere.

Unlike the U.S., where the free market reigns unchallenged, Canadian authors get royalties from the use of their books by public libraries; with fine and performing artists, we can apply for decent grants from the Canada Council.

If someone says they’re earning a living as a creative, don’t assume it’s impossible; with mostly free healthcare, it’s less impossible than in the U.S.

Language: On parle deux langues officielles. If you seethe at the words “Oprima numero dos,” stay home. Canada has two official languages, French and English. You’ll see every product and government service offered in both and, for some jobs, bilingualism is essential.

Moving to Quebec? Brush up tout de suite if you want to fully comprehend your new life there. There’s even a language police to make sure you do and a régie to oversee almost every activity.

Winter: There’s a song about it: “Mon pays ce n’est pas un pays, c’est l’hiver.” My country is not a country, it’s winter. They’re not kidding. Canadian winter redefines cold. In some places, wearing fur can save your life – like the Inuk whose snowmobile recently fell through the Arctic ice, and who built an igloo and slid into a fox he’d trapped to keep his legs warm. Cold that freezes your nostrils shut. Cold so fierce it hurts to breathe.

Regionalism: Technically, yes, we’re one nation. Newfoundlanders, who even have their own time zone and didn’t join Canada (see: Confederation) until 1949, hate CFAs (come from aways). Maritimers wonder why people in Toronto are such workaholic assholes. Some of Quebec always wants to separate. The once-booming oil patch – aka Alberta – is now deep in the hurt locker, having once sneered at Ottawa lawmakers: “Let the Eastern bastards freeze in the dark!” Everyone wants to live in Vancouver, but no one can actually afford to; a teardown just sold for $2.5 million, $80,000 over asking. And everyone beyond the GTA hates Toronto, no matter how many times it’s touted as one the best cities in the world.

Guns: Yes, we have them. But we don’t have, or want, open carry or ranting about the Second Amendment and why Canada really needs more guns.

There are good reasons for this.

One of the worst mass shootings in recent Canadian history, a sad decade before Columbine, occurred in a Montreal college classroom, on Dec. 6, 1989, when Marc Lépine hunted down and killed 14 women there.

Nor do we fetishize guns as a metaphor for freedom, or fear the government bashing in our doors to reclaim them from us.

Government: Not generally considered a scourge to be pounded into submission at every opportunity, but a source of good things – like healthcare for everyone and tuition fees for the best colleges as low as $3,000 to $5,000 a year.

But you’ll see a new passivity as well. For Canadians shelling out so much in taxes, it’s often seen as “the government’s job” to take care of things in return.

Now that the ghost of former Prime Minister Stephen Harper is rapidly fading and wary optimism awaits Trudeau’s next steps, some Canadians are actually feeling good again about the federal officials representing them, with a Cabinet that includes people who understand their portfolios, like a physician, a scientist and a Sikh.

Self-regard: Don’t brag. Ever. About anything. To Canadians, boasting is like farting – when it happens, we’ll pretend politely we didn’t hear it and trust you tried not to. Canadians desperate for fame move to the U.S.

It’s considered tacky to tell everyone how awesome you are; with smaller, tighter social and professional networks, if you’re really that great, we’ve already heard about you.

Risk: The biggest difference you’ll find – other than people throwing themselves into Class IV rapids, portaging solo for miles and heli-skiing – is a possibly bewildering aversion to taking risks. It’s annoying as hell, and confusing to go-getting Americans, but networking phone calls can often go unreturned and emails ignored. Ghosting ‘r us. Wary of conflict, no one wants to actually say no, so they say nothing instead.

In a small country with fewer great jobs and sky-high costs of living in Toronto and Vancouver, few are eager to jeopardize their hard-won gains by taking a chance on you or your unproven ideas.

Decisions can move at glacial speed. Someone will be paid to create a Royal Commission and produce a white paper first.

Diversity: Canada is officially multicultural, with almost 21 percent of the population consisting of immigrants, compared to only 13 percent (2013 Census) in the U.S. There are longstanding issues regarding appalling treatment of First Nations peoples, but Canadians are generally unlikely to rant on endlessly about illegal immigrants or attack Muslims and Sikhs for daring to wear a turban or hijab.

Work-life balance: Canadians value, and use, their vacation time – with holidays you’ve never heard of, like Queen Victoria’s birthday and Family Day. On November 11, everyone wears a poppy in their lapel for Veterans’ Day, a reference to the WWI poem written in 1915 by Canadian physician John McCrae, “In Flanders Fields.”

Reserve: Yes, we’re slower to warm up to new people. We won’t exhort you to “Have a nice day!” We’re not socialized to be “real friendly” and we tend to be both wary and skeptical, even disdainful, of those who try to sell, gladhand or backslap. No one’s likely to shoot us, or slash us on the subway, Manhattan-style, so we don’t feel compelled to preemptively placate everyone around us.

Taxes: Canadians do pay higher taxes, which help to pay for everyone’s healthcare and affordable college tuitions – not decades of foreign wars.

Patriotism: We don’t have a “Canadian Dream.” There’s no “Canadian people.” If you choose to become a citizen, you’ll be pledging allegiance to Britain’s Queen Elizabeth. (Canada is a member of the Commonwealth.)

Our Constitution mentions not a word about life, liberty or happiness – you’re moving to a nation that values “peace, order, and good government.”

We love our country deeply and are proud of its many accomplishments, (insulin, Standard time, snowmobiles, etc.) but don’t go on about them all. If we see someone flaunting a maple leaf badge, they’re probably American, trying to pass.

Not so much conflict, confrontation and bare-knuckled competitiveness.

We don’t pay tutors $250/hour to coach our kids to ace the SATs or ACTS to get into the best Canadian universities – most of which cost one-tenth of their American equivalent. Nor do we have ACTs or SATs or high school résumés to burnish.

Pink Shirt Day, this year held on Feb. 22, is a national movement begun in 2007 in a Halifax high school by two seniors showing solidarity with an incoming freshman, a campaign to end bullying. The Prime Minister, a former schoolteacher, wore one. That’s Canadian.

Helping others succeed is widely celebrated as a sign of strength, not foolish, naïve weakness.

And with only a handful of major cities to move to for well-paid work – Toronto, Vancouver, Montreal, Calgary, Ottawa, Halifax – pissing someone off in the assumption you can move cross-country and start freshly anonymous is imprudent. With a small handful of top schools and long memories, discretion is prized and alliances run deep.

Healthcare: It’s not entirely free, but no Canadian lives with that most American of fears – medical bankruptcy. Once you’re a resident, you’ll get a provincial health care card and a number. Finding a family physician can be tougher than you like – some cities have more demand than supply.

Because of this, Canadians are generally more deferential to healthcare providers, and, for a variety of reasons, suing for malpractice is more costly and complicated.

If you need elective surgery, say for a new knee or hip or cataract surgery, you might wait weeks or months. But if your need is urgent (beyond the most remote regions), you’ll get excellent care immediately.

That’s about it: welcome to Canada!

Freelance journalist Caitlin Kelly, born in Vancouver, has lived in Toronto and Montreal and, since 1989, in New York. She’s the author of “Blown Away: American Women and Guns”, and “Malled: My Unintentional Career in Retail.”