"The first day of shooting was the day we went to the cross burning": W. Kamau Bell on hanging out with the KKK and claiming his space with humor 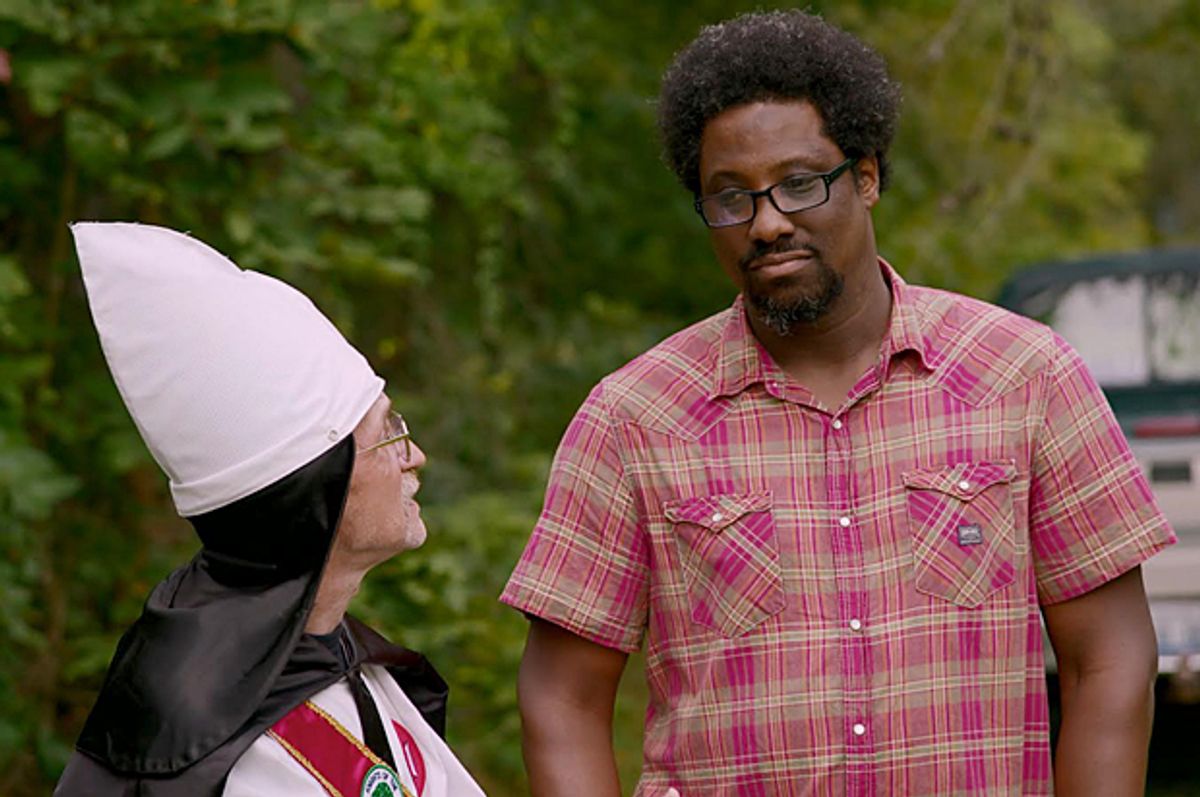 Comedian W. Kamau Bell is one of the nation’s smartest, funniest commentators on race. Known for his stand-up as well as the show “Totally Biased,” he’s cutting but oddly friendly in his delivery.

Bell’s new show, "United Shades of America," premieres on CNN on April 24. He says it’s dedicated to “reaching across the aisle,” and he reaches about as far as he can: The first episode looks at Bell’s trip to hang out with Ku Klux Klansmen – he even gets to witness a cross burning. (Or, “cross lighting,” as he’s told they’re called.) He’s told about “mud races,” about how white supremacists are not about being “politically correct,” and he’s warned that “we will hurt you.”

We spoke to the Bay Area-dwelling Bell from New York. The interview has been lightly edited for clarity.

So I saw the KKK episode, which is sort of stunning. I don’t know whether to laugh or cry. I guess the premise of the show – and certainly this episode – is that you change the tone of a place? You go to places that are unlikely for you?

How old were you when you first got a sense that your presence changed a scene – the feeling in a room? Is that something you can notice?

That was something my mom told me was gonna happen – that moment when as a young black boy you transition to being a young black man, which happens earlier than boys of other races. At the age where I was gonna be out and about by myself – maybe 10 or something, where I might go down the street and buy a comic book by myself – my mom took me out to the local convenience store/drugstore, and sort of gave me the rundown: “When you’re out by yourself, this is how it’s gonna work. That’s the store detective, he’s gonna follow you around, don’t touch anything unless you’re gonna buy it…” I had to be aware of how the world perceived me.

And by the time I was in high school, I was over 6 feet tall, so I was a man even if I’m not a man… The Trayvon Martin phenomenon. I had to know that people are gonna treat me like a man, if I’m making a decision the way a teenager or a boy makes them.

The show is largely about racism ... Do you think the country has gotten more racist since Obama was elected?

No – I think it’s like if you’re in the woods and you lift up an old log. Those bugs were under the log, but now you can see them. That’s the case with racism in America… While a lot of black people knew that America was exactly as racist as it appeared to be, a lot of white people have spent almost eight years like, “No… no… no.”

We’ve certainly had more racism discussions with Obama in office than we had with George W. Bush in office. So that’s a net positive even if it’s a painful net positive.

You spent a lot of time with Klansmen in this episode. Were you frightened through much of it?

Yeah, the first day of shooting was the day we went to the cross burning – or “cross lighting.” We walked around the town talking to people, asking, “Do you know about the Klan around here?” Most people were like, “No.” But a young guy was like, “Yeah, I know about them.” ... I had a lot of time to be super-anxious about it.

In the car waiting to be told I could drive in, I really got myself together, and also started to sort of work myself into, “All right, gotta go in there, gotta be funny.” That episode really taught me that humor is a defense mechanism that I developed – because I’m using it to defend myself. To sort of keep everyone on their toes, show everyone they’re not gonna get one over on me ... Sort of claim my space through humor.

Did any of them persuade you that the group is about morality, or whatever, and not racism?

No. When your core belief is that the races shouldn’t mix, that’s … It’s like the Three Little Pigs – your house is built on hay.

Kind of hard to recover from that premise, isn’t it?

But when it’s built on the premise that blacks and whites can’t mix … I mean, I don’t want to mix with you guys. But I’m married to a white woman and have lots of white friends -- those people are great!

The Klan was absolutely one of America’s first homegrown terrorist groups … At some point, a lot of the leadership of the country, and also of cities around the country—those guys were either Klansmen or active sympathizers of the Klan. Well, now those people know you don’t have to wear the robes anymore. As Malcolm X said, you can do it in a suit.

And now it sort of exists as the most dangerous men’s group of all kinds. There’s not much difference between the Klan out in the woods burning crosses and a men’s group out in the woods beating drums and claiming their manhood. These guys may have done dangerous things, they may have done illegal things … But to me it felt like this was a lot of misplaced anger and emotion and sadness. That, you know, you guys might need some therapy or, I don’t know – a better job, a better economy? You’ve decided that your problems aren’t your own – they’re black people.

After I hung out with that group in the woods … I know I left with a lot of those people liking me.

Were you charmed at all by them?

It’s funny – when you sit down and talk to people, it’s bridge-building … It doesn’t mean you always need to come across my bridge, or that I want to come across your bridge. But at least we recognize that we’re both humans in the world, living our lives. That’s all we need to do in this country. Maybe we become best friends, or maybe we just recognize that we don’t need to kill each other, or vote against each other.

I had as good a time as I could have hanging out with those guys in the woods. Not that they didn’t say fucked-up things. But it was way more fun to hang out with them than it was with Thomas Robb and his daughter at the Klan church.

Yeah, that was a little awkward, eh?

What are some other places you’ll be going as the show goes on?

We went to Alaska, the top-most part of North America -- Barrow, Alaska. Which is a completely different part of this country that people don’t talk about or see that often.

Well, the ground – the snow is awfully white. (Laughs.) But the population is 60 percent native… We did San Quentin, in the Bay Area – that’s probably my most favorite episode. It’s not that we humanized those guys, it’s that those guys are humans. A lot of times you see inmates in prison documentaries or on TV or on fictional things, and they’re not meant to be human.

I think because I’m a black man around the same age as those guys, we had a real connection. I did stupid things when I was younger, just nothing that led me to jail. That doesn’t mean I’m better, it just means that I wasn’t in those circumstances. I was just amazed at how we didn’t meet one guy who said they were innocent, or “I didn’t do it.” They said, “I’m in recovery, I do restorative justice, I’ve got some skills, I write for the newspaper.” There’s a lot of good, untapped natural resouces in our prison system that we’ve locked up.

They don’t get paroled because politicians don’t want to say, “Last year we paroled a lot of prisoners!” But it should be about rehabilitation ... It just sounds better for politicians to say, “I locked them up and threw away the key!”

We went to Portland, Oregon. Known for its hipsters, but its dirty secret is that the hipster influx into Portland is pricing out a lot of the black residents. The question for me is, How can you be hip but not cool? I’m not a hipster – I identify as a "blerd" – but I’m definitely pro-black people. It’s a story being replicated around the country, whether it’s Brooklyn or Oakland.

We also did cops in Camden, New Jersey, talked about demographics in East L.A., one in Florida where I talked to spring breakers and senior citizens in a retirement community. And we did one off the grid in Asheville, North Carolina, and also in South Carolina.

Has going to all of these places and meeting all of these people made you feel better or worse about race relations in the country, or are you just weeping walking away from these encounters?

There is some weeping … The thing that makes me feel good is that if we all sat down at a table across from each other, all the different people, across racial lines, gender lines, and had conversations, I would feel better about this country. And maybe this show is modeling those types of conversations. Because I wear my ignorance, my lack of knowledge, proudly on my sleeve, and try to be respectful and gain knowledge through those conversations.