This is where right-wing radicalism is festering: While the nation watches the presidential race, there are scary things happening at state legislatures 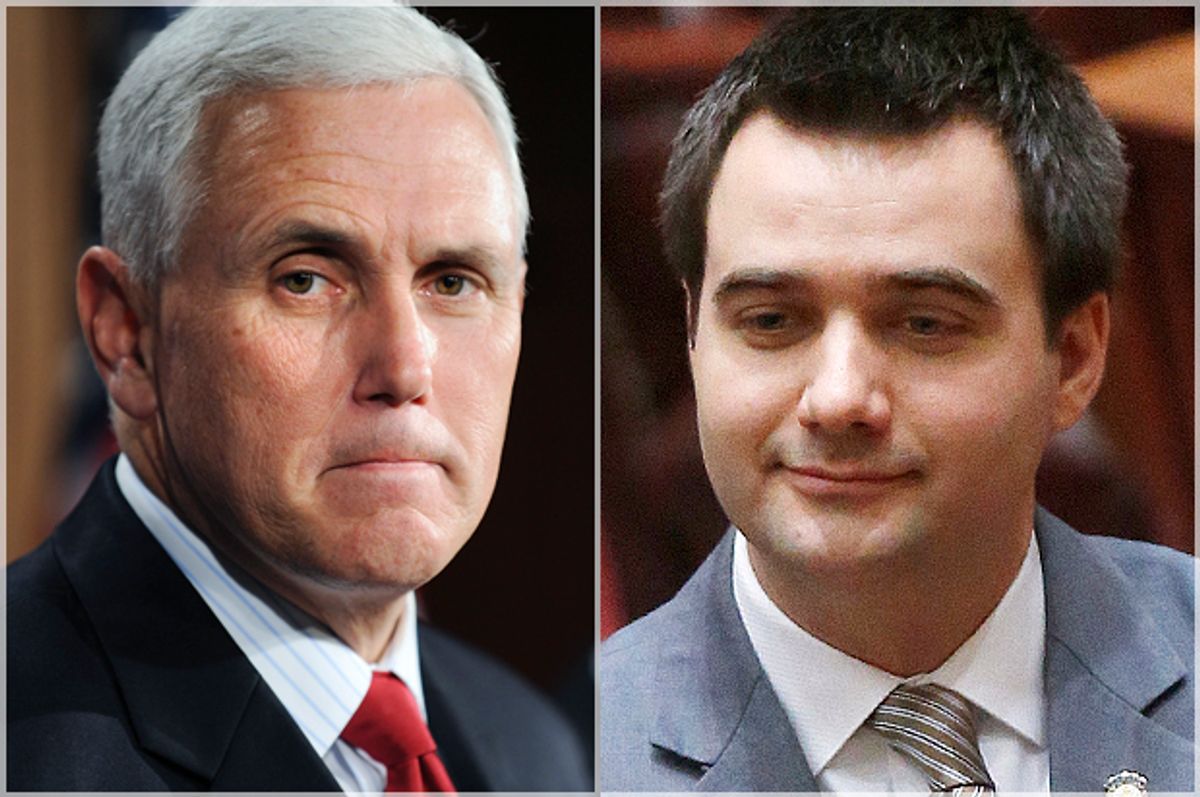 After Thursday night's Republican debate, where candidates competed to see who was most eager to commit war crimes, it's understandable to be very afraid of the dark place Republicans want to take this country. Unfortunately, the news is even worse than that. While the nation's eyes are riveted to the national stage, Republicans continue the multi-decade project of turning our nation into a right-wing wasteland by focusing their efforts where they can have the most impact with the least attention: state legislatures.

It's easy to get inured to the relentless drumbeat of stories of Republican-controlled state legislatures passing bills codifying the culture war obsessions of the right, and with the Republican primary serving as a distraction, the state horror show is getting less national attention than it usually does. Which is how Republicans like it, because they can maximize the damage while minimizing the pushback. That's why it's critical to pay attention, even if it can, at times, be overwhelming.

As it has been for years now, the No. 1 priority for Republican state legislatures is making sex as fraught and unsafe an experience as possible for women, especially low-income women. As I reported earlier last week, Florida passed a massive bill that will cut off access to both birth control and abortion, by reducing funding and passing medically unnecessary restrictions to make it simply too expensive to offer affordable care to women, especially through Planned Parenthood.

Now Indiana's Legislature has passed a bill that forces women to give birth if a doctor has detected a fetal abnormality. Which, yes, would mean that a pregnant woman who contracts Zika would lose her right to abortion, while a woman with a healthy pregnancy would retain her right to say no to giving birth. Even some Republicans balked at the sadistic pleasure their colleagues take in the idea of forcing women to give birth to children who will suffer, die or be too much for women to care for.

"Today is a perfect example of a bunch of middle-aged guys sitting in this room making decisions about what we think is best for women," state Rep. Sean Eberhart, a Republican, said. He voted no on the advice of his wife.

The breathless obsession with making sure all those sex-having women pay has completely enthralled state legislatures across the country. Oklahoma state Sen. Nathan Dahm is pushing a bill that would strip any doctor who performs an abortion of his or her medical license.  His colleague, state Sen. Joseph Silk, went one further, authoring a bill that would charge anyone who performs an abortion of murder. Both bills have come out of committee, though Senate Republicans are holding the murder bill from a vote right now. Hopefully they'll keep it that way, because they look like a bunch of yahoos.

In Iowa, state Sen. Jake Chapman is trying to make abortion a "hate crime." This is no doubt based on right-wing propaganda that argues that women get abortions because they have irrational bigotry toward embryos and not because of mundane things like they want to control when and how they have children.

But while the obsession with female sexuality is so strong that one is tempted to label it "single-minded," the sad truth is that state legislatures have plenty of time for other right-wing hobby horses.

Wisconsin's assembly passed a bill in February that would fine cities, dubbed "sanctuary cities" by right-wingers, that have policies against police harassing people about their immigration status. The bill is aimed at Madison, which has a policy of not turning arrestees over to federal immigration unless they are charged with violent crimes.

In Iowa, legislators are literally considering a bill that would remove age restrictions from firearm handling, allowing kids younger than 14 to shoot guns.

In Arizona, lawmakers quietly started moving a bill, under the guise of simplification of campaign finance, that would double the amount of dark money that can be spent on campaigns in the state.  "Dark money" is money that is donated to groups by anonymous donors, and the bill is being pushed by Americans for Prosperity, a Koch brothers-run political action group.

Arizona is also pushing a bill that would ban state officials from enforcing any federal executive action, policy or court decision that restricts access to firearms.

Of course, the right-wing conspiracy theory about our courts practicing "Sharia law" is still being chewed over by state legislatures. This year, Idaho is considering a law that would ban this nonexistent practice. It appears the main reason for bringing such bills to the table is to use the legislative floor to make speeches demonizing Muslims. “There is no issue right now, there is no issue," Democratic state Rep. John Rusche said. "And to bring this piece of legislation and the supporting documents that showed severed hands and called the Prophet Mohammed a pedophile was just beyond the pale.”

Then there are the bills codifying and protecting anti-gay discrimination that are being pushed in the guise of "religious liberty." Missouri just passed one, despite the noble 40-hour filibuster conducted by Democrats to stop it. Georgia's legislature passed one, too.

The Republican governor of Georgia, Nathan Deal — no doubt influenced by the major corporations and other business interests speaking out and even threatening to pull business — is refusing to sign the bill. Now the religious right is casting shade on Deal, insinuating he's not the conservative Christian he clearly is. (He's just one that doesn't want to see his state bleed money so a few bakers can be mean to gay couples.)

A lot of these bills will die in the legislative process, of course. But not all. The Florida and Indiana anti-choice bills, for instance, are slam dunks. But even if the bills don't become law, the frequency and severity of these bills should be alarming. The state legislatures of red states have become rat's nests of the worst kind of paranoid right-wing nuttery. What we're seeing on the national stage has been bred by years upon years of this nonsense, which is now trickling up and presenting a very real threat to us all.