Trump surrogates defend his increasingly violent rallies, while Bill O'Reilly argues that this is all Obama's fault 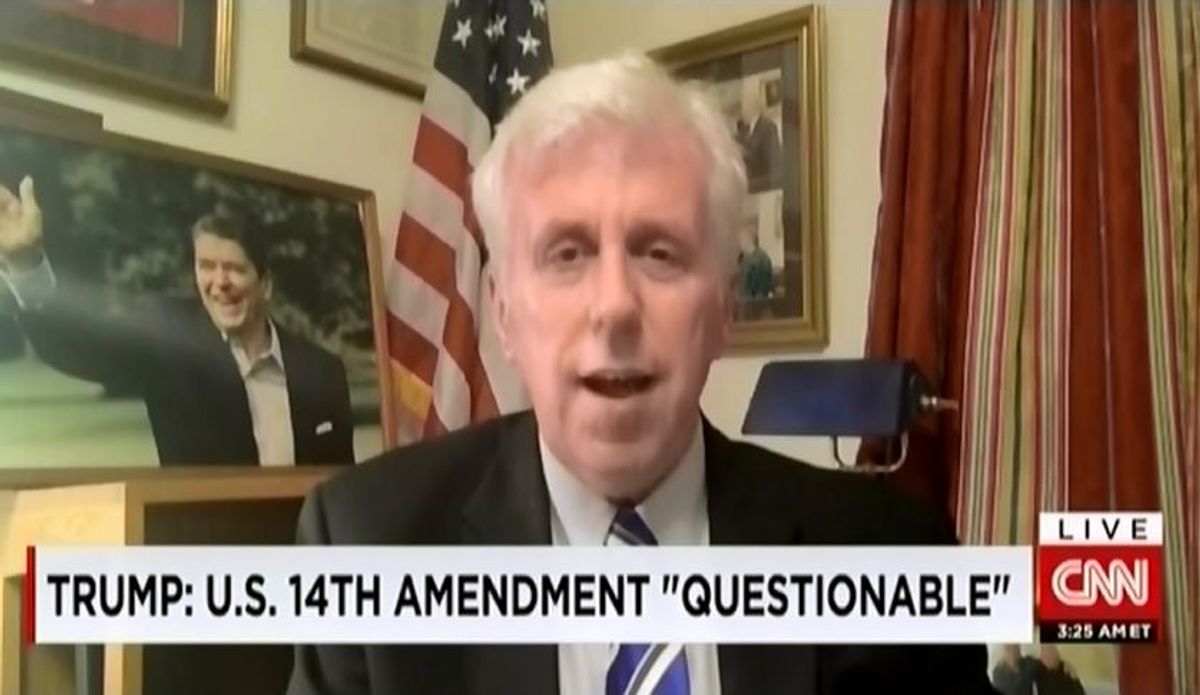 Various Trump loyalists, sycophants and nutjobs have surfaced this week to echo their master’s sentiment that people who oppose his message and protest at his rallies are very bad people who deserve what’s coming to them. In the good old days, Trump has said, “they would have been taken out in a stretcher.”

1. Omarosa Manigault: What do the protesters expect, a hug?

Omarosa Manigault, the contestant on the first season of Trump's reality show who has joined his team of crazies as a surrogate for his campaign, got some more airtime on MSNBC Thursday night.

Host Chris Matthews asked for her thoughts on the increasing outbreaks of violence at Trump rallies. Manigault was ready for that one.

"Donald can't be responsible for every single person that comes to his rally," she said. "Listen, you have a right to go into a closed, private event and you get what is coming to you. I do not condone violence. If you go into an environment where you're interrupting 13, 14 times, do you expect a hug or Kumbaya?"

Matthews wondered if she in any way thought that Trump himself provoked people and ratcheted up that violence. She kind of said yes, and blamed it on those often-maligned New York values.

“He’s a New Yorker, what do you want him to say?" Manigault asked. "He’s not gonna be pushed around, Chris.”

She also asserted, without a scintilla of evidence, that violence is occurring at Democratic rallies, but was thwarted by Francesca Chambers, a Daily Mail reporter, who actually knows something about the topic.

Damn. Hate when that happens.

"I typically cover the Democrats, and I have never seen that kind of behavior go down out of a Hillary Clinton rally or a Bernie Sanders rally," Chambers said. "Sure, it gets fiery especially at the Sanders rallies. A lot of booing for Hillary Clinton quite often, but however, no one's ever when I've been at those rallies been punched."

"No, it's called reporting," Chris Matthews jumped in.

This time, Donald did not tell Omarosa “you’re fired.” Because, why would he? She's doing great!

Jeffrey Lord, a member of Trump's insane clown posse who has been hired by CNN as an “analyst” but whose actual title should be insane Trump apologist, was at it again this week, bizarrely blaming liberals for the problem du jour, which is, of course, violence at Trump rallies. You’ll remember that last week Lord attempted to whitesplain to Van Jones that the KKK was and continues to be the armed wing of the Democratic Party, a leftist organization and therefore not something Trump needs to disavow.

So that should give you some idea of the level of reality we’re operating on.

This week Lord continued his peculiar brand of insanity when he blamed liberals for the new curse that is spreading through the land, the fact that Trump’s thugs and acolytes are getting violent with protesters who attend the Republican frontrunner’s rallies.

Specifically, Lord was referring to the videotaped incident in which a 78-year-old white man suckerpunched a black protester in the head at a rally, an assault for which the white man was charged.

When asked if he thought it might be important for Trump to denounce this sort of violence, Lord expressed the view that the incident was the black protester’s fault as well as the left’s.

“The American left has a long and detailed history of doing exactly this,” Lord said. “What do you think the 1968 Democratic Convention was all about? It’s history!”

He continued to unfurl his wild illogic. Trump did not have a responsibility to denounce the violence because liberals had been using the same tactics for “decades.”

Scratching your head for examples? Yeah, us too.

Instead, Lord denounced the protesters for showing up, not being down with the Trump worship program, and not raising their hands to salute the great and powerful leader.

Governor Rick Scott of Florida went on "Morning Joe" this week to remind everyone of just how repugnant he is.

Joe Scarborough gave the gov the pretty softball question of asking for his comment on Donald Trump’s assertion that "Islam hates us." How easy is this question? So easy Marco Rubio was able to seem like a relatively reasonable man when responding to it during Thursday night’s debate, pointing out that there are some Muslims who have served in our armed forces. Relative is the key word, since Rubio has been a staunch advocate of the U.S. holy war on various Muslim nations, and cites Egypt’s repressive President Abdel Fattah el-Sisi as a “Muslim we ought to be standing with.”

Still, Gov. Scott fumbled Morning Joe’s chummy question: “You're a friend of Donald Trump. Would you tell your friend, Donald Trump, that he should walk back his statements that Muslims, that Islam hates America, that Islam hates us? Do you think Muslims in the state of Florida hate America?”

Scott dissembled, talked about Florida being a melting pot, then about the Paris attacks, leaping to the specious link between that and Syrian refugees, and how we should therefore keep them out.

“That’s not the question,” Mika Brzezinski pointed out.

Not to give Morning Joe any undue credit, because he deserves none, but it is always fun to watch Republicans eat their own.

On the day Nancy Reagan was buried, Hillary Clinton praised her for her “advocacy” for people with AIDS and for creating a “national conversation” about the disease.

That is not a compliment that even fans of Nancy Reagan would find fitting. The Reagans famously ignored AIDS, failing to acknowledge the disease or even utter the word as tens of thousands died. Their non-response inspired the slogan, "Silence = Death."

So, really, how entirely weird and wrong.

Hillary immediately apologized when the backlash hit, saying she “misspoke,” a peculiarly ham-fisted Clintonesque way of saying “I fucked up." How exactly was this a “misspeaking” incident? Did she mean to say the complete opposite of what she said and then some tongue gremlins got involved and said what she said?

As a reminder, here’s what she said in an interview with MSNBC: “Because of both President and Mrs. Reagan, in particular Mrs. Reagan, we started a national conversation when before nobody would talk about it, nobody wanted to do anything about it, and that, too, is something that I really appreciate.

“With her very effective, low-key advocacy… it penetrated the public conscience and people began to say, Hey, we have to do something about this too."

As LGBT activist and writer Dan Savage suggested to Hillary, "You want to say something nice about Dead Nancy Fucking Dead Reagan on the TV? Compliment her taste in china."

Florida is sinking. That’s just a sad fact. It is sinking because of manmade climate change which has led to sea level rise.

More facts. The very ground upon which Marco Rubio stood Thursday night in Florida was sinking. Just as surely as his electoral hopes.

Marco Rubio is in denial about Florida eventually being underwater (which is chronicled in brilliant detail here), but hey, give him credit. On Thursday night, when he was asked, or really begged by Miami’s mayor to acknowledge and pledge to do something about climate change, Rubio bravely admitted that there is such a thing as weather.

That’s it. He went on to explain that since there has always been weather it’s pointless to pass any laws to attempt to stem the rising tide in Miami and other Florida cities.

Rubio is all in for climate change denialism. Florida’s mayors are on their own.

While we’re at it, since some commentators seem to think Rubio had a good debate in that he made no penis jokes and seemed to know something about Cuba, we're also reminded of what a good son he is. On changes to Social Security eligibility, he bravely said: “I’m against anything that hurts my mother.” Then, apparently unaware that other people have mothers they would prefer not to have hurt, or are mothers themselves, or are just people, Rubio bravely took the position that he would hurt them all by suggesting after his mother gets hers, we better cut that whole Social Security thing. Same line of reasoning for immigration. He opposes letting people like his family in, now that they are in, and are, of course, what makes America such a great country.

There’s your Republican establishment golden boy. He refrains from dick jokes, but manages just to be one himself.

First of all, it's a little strange that Bill O’Reilly would be blaming anyone for Trump, since O’Reilly seems to be in the grip of a massive man crush on Trump, whom he fawns all over, buys milkshakes for, and generally begs to like him.

But blaming people for Trump is all the rage these days. So O’Reilly joined the chorus of unhinged a**holes like Bobby Jindal last week, who somehow blame President Obama for Trump. For Jindal, it was because Obama’s sentences are too long and nuanced, and he made people yearn for short declarative sentences, like: “We don’t win anymore,” and “Islam hates us.”

O’Reilly’s argument is that Obama has instilled anger in the electorate. How did he do that, exactly? Presumably by being a black man who occupies the White House who does not always agree with conservatives.

“I think he caused it in the sense that he implanted in the minds of conservative Americans, an anger,” O'Reilly said. “They don't like him. They don't like what he has done. There isn't anything they like about him. And that anger is reflected by Donald Trump.”

Obama, O’Reilly opined, is ground zero for all that anger.

Isn’t that rather like saying, for instance, Daddy is angry and now he is going to beat someone, like the kids. And someone has to be held responsible for that anger, but not dad. Maybe the kids.

Bill O’Reilly, unhinged spokesman for the party of personal responsibility, finds his scapegoat in a predictable place.