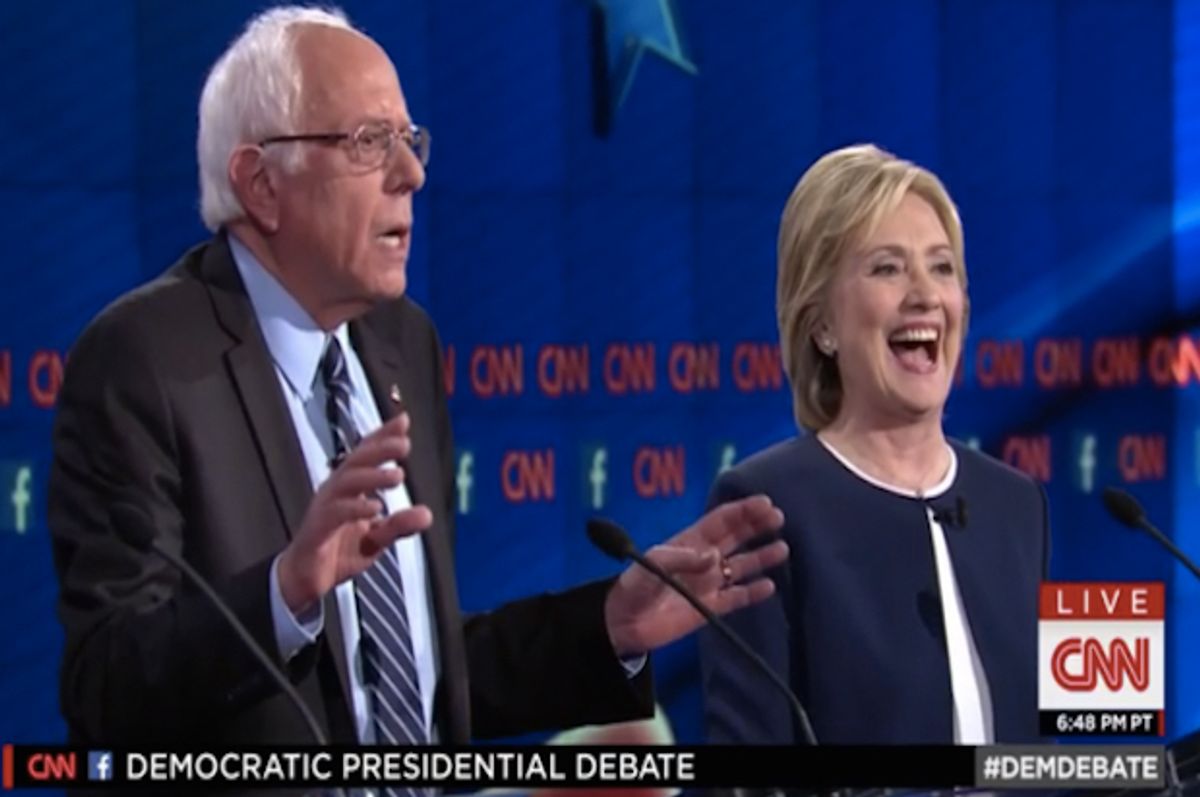 There was yet another televised Democratic presidential showdown Sunday night. This time a town hall hosted by CNN and TV One at The Ohio State University as hosts Jake Tapper and Roland Martin reminded viewers repeatedly.

While by now both candidates' basic stump speeches can be recited by even the most casual fan of Saturday Night Live, Sunday's event was saved by pointed questions concerning African-Americans in this country from Martin (like on the issue of minorities being locked out of unions and political consulting) and from the town hall audience.

The candidates received questions from a man who said he was both a one percent religious and ethnic minority in this country, a millennial small business owner and a Democrat who says she's been badly hurt by Obamacare.

Here are the 4 best voter questioners from CNN's #Demtownhall:

The first voter question of the night came from Terina Allen, whose brother Sam DuBose was shot in the head by a University of Cincinnati police officer during a routine traffic stop for a missing license plate last summer.

"As Americans, we are - it's expected that we can speak out against terrorists, we can speak out against murders and killers of all forms except when that killer is a police officer," Allen said, noting her brother would have turned 44 on Saturday. "As president, what would you do to create a zero tolerance policy for unjust police killings, and to help to create a system of accountability that is greater than what we have right now," Allen asked Sanders.

The Vermont senator pledged to Allen that in a Sanders administration every death in police custody will result in "an automatic Department of Justice investigation."

"My Department of Justice will investigate every killing of an American held in police custody or killed while being apprehended," Sanders vowed, repeating an audacious pledge he's made in the past.

As it stands now, no federal agency even tracks all officer-involved shootings or deaths in police custody. In fact, the Justice Department usually only intervenes in such cases if local officials ask them for assistance or if it is clear local departments are incapable of handling the investigation themselves.

Crystal Oertle, a heroin addict for over 12 years, bravely stood up shared that as a mother who used to take her child with her to buy heroin daily she understands that she was "lucky not to be in prison," and asked Sanders, whom she she said she plans to vote for, about the failed war on drugs.

"My question is what you plan to do with the failed drug policy that tends to want to incarcerate addicts instead of rehabilitate them," Oertle asked Sanders:

Sanders: We must look at addiction as a "health issue not a criminal issue" #DemTownHall https://t.co/avxdNOphmH https://t.co/e9PHQK0hIA

In the most poignant moment of the night, a black man who served nearly 40 years in jail, two of them on death row, for a murder he did not commit asked a presidential candidate about her support for the death penalty.

"I came perilously close to my own execution," Jackson told Clinton, recounting his 39 year false imprisonment. At 18, Jackson was convicted of murder in 1975 based upon the eyewitness account of a lone 12-year-old who recanted in court years later.

"In light of what I just shared with you and in light of the fact that there are documented cases of innocent people who have been executed in our country, I would like to know how you can still take your stance on the death penalty," Jackson asked Clinton choking up.

Clinton told Jackson that she struggles with the issue of the death penalty, indicating the she'd like to see the Supreme Court abolish it and calling on individual states to do so in the meantime. Federally, however, Clinton argued that she remained in favor of "very limited use" of the death penalty, in instances like "mass killing" and terrorism.

"That is the exception that I still am struggling with, and it would only be in the federal system," she told Jackson:

Teresa O'Donnell, a Democrat who supported President Obama, told Clinton she "would like to vote Democratic, but it has cost me a lot of money," citing her family's rising health insurance costs since the passage of the Affordable Care Act.

O'Donnell said she was leaning towards voting for Clinton, but said, "I'm just wondering if Democrats really realize how difficult it has been on working-class Americans to finance Obamacare."

Clinton tried her best to put her wonkiness to use and asked O'Donell about the specifics of her family's coverage plan but gave a long answer that basically amounted to "shop around for a better plan," in short:

One thing that I would like you to do—and I'm not saying it's going to making a difference, but I would like for you to go shopping on that exchange. As i understand it, Ohio has the federal exchange—is that right, Joyce? Because they did not set up a state exchange, so you have the federal exchange. And to go on and keep looking to see what the prices are, because we have to get more competition back into the insurance market.