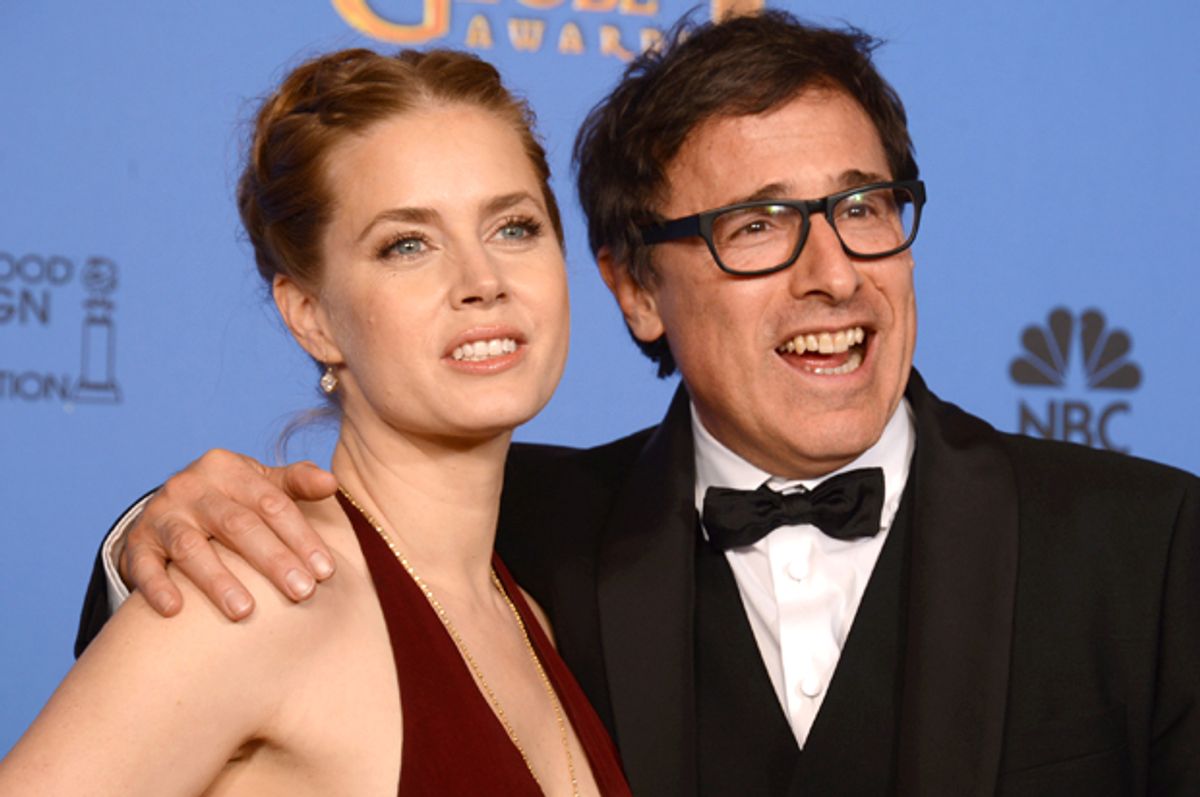 If you weren’t already aware, David O. Russell is a walking pile of garbage.

During the infamous Sony hacks, it was revealed that the famously tyrannical director made Amy Adams’ life a living hell on the set of “American Hustle,” so much so that Christian Bale (aka the guy who chewed out a PA for getting in his eye line) was forced to intervene. In an email to Sony chief Michael Lynton, journalist Jonathan Alter wrote: “He grabbed one guy by the collar, cursed out people repeatedly in front of others and so abused Amy Adams that Christian Bale got in his face and told him to stop acting like an asshole.”

In an interview with British GQ, Adams spoke out against Russell’s behavior. “I was really just devastated on set,” she told the mag. “I mean, not every day, but most. Jennifer [Lawrence] doesn’t take any of it on. She’s Teflon. And I am not Teflon. But I also don’t like to see other people treated badly. It’s not OK with me. Life to me is more important than movies.”

This shouldn’t be surprising to anyone even passingly familiar with Russell’s history; after all, the director once groped his transgender niece. But the incident raises the question: Why do studios continue to hire him?

There’s a simple answer: While female directors are branded as being difficult and denied future work (see: Catherine Hardwicke) for all manner of inane reasons, being unprofessional, abusive and borderline sociopathic is seen as a quirk of a male director’s genius. In 2014, a BBC piece from Nicholas Barber on legendarily difficult auteurs—like Stanley Kubrick and Alfred Hitchcock, who compared actors to cattle—openly wondered if the best directors are tyrants. “In short, the ends justify the means,” he wrote.

That kind of thinking rationalizes behavior that would get one fired in any other industry (especially if one were female), and Russell is only the latest example in a long line of filmmakers who are horrible to work for. Here are five working directors who just keep getting their projects bankrolled, no matter how awful they are.

As previously mentioned, this is just the “Joy” director’s latest on-set mutiny. While working on “Three Kings”—his breakout film—David O. Russell treated his crew so abominably that George Clooney tried to kill him.

Throughout the shoot, Russell would humiliate and scream at his subordinates—making the script supervisor burst into tears. One day, the director requested that one of the extras throw Clooney to the ground to film a scene, and Clooney recalled that the “nervous” actor balked at the direction. David O. Russell responded by kicking him and yelling: “Do you want to be in this fucking movie? Then throw him to the fucking ground!” When an assistant director tried to intervene, Russell snatched his walkie-talkie and chucked it.

George Clooney, too, attempted to step in, and Russell challenged him to a fight. “You're being a dick,” he said. “You want to hit me? You want to hit me? Come on, pussy, hit me.” The director then began to choke him and Clooney recalls that he “went nuts.” He said, “I had him by the throat. I was going to kill him. Kill him.”

If you need any indication of what David O. Russell is like to work for, check out the footage of Russell calling Lily Tomlin a “bitch” on the set of “I Heart Huckabees.” During a set meltdown, Russell yelled, “I worked on this thing for three years not to have some cunt yell at me in front of the fucking crew!”

The “Seven” and “Gone Girl” director comes from the Stanley Kubrick school of mind-numbing perfectionism, in which actors are forced to repeatedly redo the same take well past their breaking point. Kubrick’s shoot for “Eyes Wide Shut” was a marathon effort that lasted for a Guinness-shattering 400 days, two of which consisted of reshooting the same sequence of the late director Sydney Pollack entering a room. On “The Shining,” Kubrick famously forced Scatman Crothers to redo the same take more than 100 times.

Fincher’s own take on this method is called “70 Takes and Up,” one most infamously employed on the set for “Zodiac,” when the exacting auteur clashed with stars Robert Downey Jr. and Jake Gyllenhaal. Downey compared the experience of working with Fincher to a “gulag,” leaving mason jars filled with urine scattered around the set in protest of the director’s no bathroom breaks policy.

Gyllenhaal had it particularly hard. Throughout the shoot, the director attempted to wear the doe-eyed actor down, as Fincher would later comment that he “[hates] earnestness in a performance.” After forcing the 35-year-old to repeat the same scene again and again, the director would delete all of Jake Gyllenhaal’s previous takes, just to make the actor cry. Gyllenhaal would never work with the director again, saying that Fincher “paints with people … it’s tough to be a color.”

If Nicholas Barber wrote that David Fincher “walks the line between director and dictator,” that fascistic-style approach also showed on the set of “Fight Club.” In order to get a single shot of the movie’s iconic bars of soap, he forced his crew to retake the footage until the wee hours of the morning. Can you imagine filming soap 41 times?

There’s a famous—if sadly apocryphal—story that noted Danish madman Lars von Trier treated Björk so poorly while filming “Dancer in the Dark” that she ate her sweater. Here’s the truthier version: When she would show up for work every morning she would spit at Von Trier and yell, “I hate you, Mr. Von Trier. I hate you!” Things got so bad between the two that Björk declined to appear on the set for days on end. According to an NPR report, she even tried to “escape the set.”

“[Trier] needs a female to provide his work soul,” she would later claim. “And he envies them and hates them for it. So he has to destroy them during the filming. And hide the evidence.” When Nicole Kidman signed on to “Dogville,” the singer personally penned her a letter warning that Von Trier would “eat her soul.”

The director—who once joked that he is a Nazi at a press interview at the Cannes Film Festival—wasn’t any kinder to his “Dogville” actors. He and Kidman often screamed at each other, while Paul Bettany (best known to audiences as the imaginary best friend from “A Beautiful Mind”) called making the film “a hideous experience.”

The volatile auteur, however, has few regrets. The one thing he would do differently? He would be “meaner” to Björk.

For his part, Oliver Stone tends to blame his actors for the animosity. He called Dreyfuss “the single worst experience I've ever had with an actor in my life.” After James Woods walked off the set of “Salvador,” Stone nearly killed him when he came back. While filming the football drama “Any Given Sunday,” Stone would confront Jamie Foxx during a scene. “You’re just not good at all, are you?” he asked.

Foxx would later win an Academy Award for his performance in “Ray,” whereas Oliver Stone hasn’t made a good movie in over a decade.

Blake Lively isn’t the only one handing out shirts to commemorate their experience working with a sadistic director. James Cameron’s crew members are known to sport tees that read: “You Can’t Scare Me. I Work For James Cameron.” Cameron notoriously hates cellphones when filming, so much so he has a nail gun stashed away on set; if one happens to ring, the device will become wall art.

The director isn’t any kinder to the actors who work with him and has a reputation for nearly drowning them. A fan site for “Titanic” details Kate Winslet’s many labors while filming the box office smash: “influenza, extreme chill from being exposed to cold water, a chipped bone, deep bruises, and a near death experience.” In 2012, the New York Times asked Cameron about this—as well as Winslet’s stated wish to “please let me die” during the shoot—and he was unrepentant. “Man up,” he responded. “Or woman up.”

Ed Harris had a similar experience filming “The Abyss”: After nearly drowning during one of the film’s many underwater sequences, the veteran actor was reduced to tears, sobbing after he left the set. His co-star, Mary Elizabeth Mastrantonio, was forced to piss her pants when Cameron informed her that they wouldn’t be stopping the scene for a bathroom break. (On the plus side, at least she was wearing a wetsuit.)

If it’s any consolation to the people who work for James Cameron, it doesn’t sound like it’s any more fun to be married to him. He’s been divorced four times, and actress Linda Hamilton recalled that their relationship was “terrible on every level.” That one’s going on his tombstone.

Honorable mentions: Francis Ford Coppola, who caused Martin Sheen to have a heart attack while filming “Apocalypse Now”; Michael Bay, whom Megan Fox compared to Hitler; and Werner Herzog, who forced his film crew to drag a boat up a mountain on “Fitzcarraldo”