Donald Trump is now weaponizing the conservative id: Why the escalating violence of his campaign is so frightening 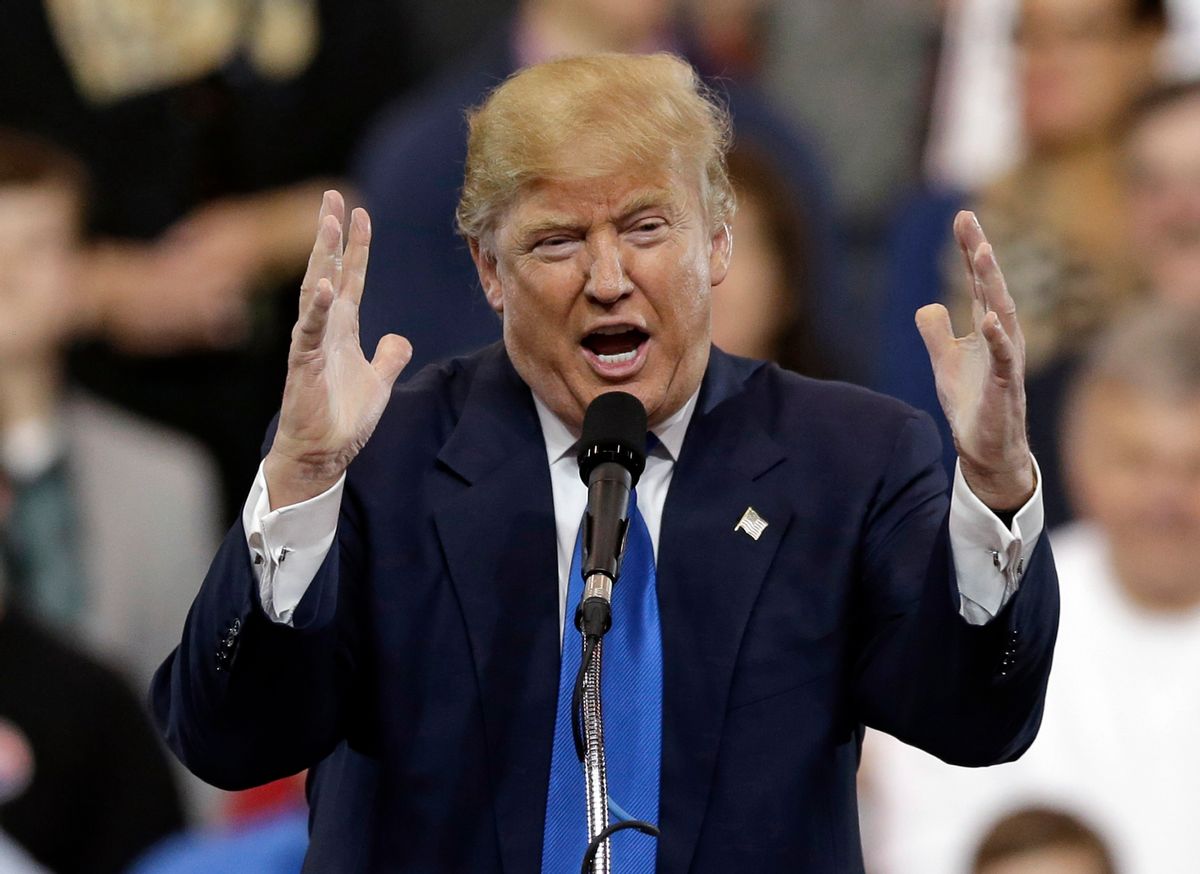 These past few days, we saw an escalation in the building of Donald Trump's authoritarian campaign for president. After winning big at the polls despite having refused to disavow the KKK, Trump appeared on the debate stage noticeably subdued, and everyone assumed that he had turned over a new leaf. But it was not to be. Last week, his rallies took yet another dark turn with the typical ugly rhetoric beginning to be matched by some very ugly violence. Even his own campaign manager was implicated in an assault on a conservative reporter.

By Friday, tensions were running high at a St. Louis rally, with protesters facing off against rally attendees outside the event, featuring bizarre taunts from Trump supporters like this:

Hey, fuck Islam, Allah is a whore, Jesus is the most high God, and you bitches are done! (makes gun-fingers) Fuck you!

(Trump had recently said on television, "Islam hates us" so perhaps this was just one of his passionate supporters "fighting back" as Trump exhorts them to do.)

But the "passionate" rhetoric that people are protesting isn't just the derogatory language about Muslims. Trump calls immigrants rapists and plans mass deportation. He extols "law and order" and openly yearns for days when he says it was acceptable to beat protesters, many of whom happen to be African Americans. In recent days, the campaign had begun removing them from the rallies without them having said a word. Get 'em out!

All this provocative language, over the course of many months, finally culminated in a confrontation on Friday night in Chicago, where for possibly cynical reasons Trump planned a rally at a University populated with many ethnic and racial minorities. Some students decided to stage a large organized protest and Trump cancelled the rally after everyone was inside the event venue. There are many different accounts of what started what appeared on TV as a melee on the floor. Trump said the police told him it was unsafe but they denied they ever told him that, leading to some informed speculation that Trump had planned for such an altercation to provoke an uprising for publicity purposes.

It's hard to imagine anyone being quite that Machiavellian, even Donald Trump, but he's a master media manipulator so who knows? He certainly has no regrets. In fact, even after endless recitations of his many incitements to violence, he claims he has said nothing wrong. On "Meet the Press" yesterday, he had this to say for himself:

TRUMP: Well, I haven't said anything that -- I'm just expressing my opinion. What have I said that's wrong? I mean, I talk about illegal immigration, I talk about building a wall, I say Mexico's going to pay for the wall, which they will. And all of these things. I mean, what have I said that's wrong? You tell me. The fact is, they're really upset with the way our country is being run. It's a disgrace.

He then said he was contemplating paying the legal fees of the North Carolina man who cold-cocked a protester last week. He is clearly not ratcheting down the rhetoric.

To those of us who have been closely watching his speeches from the beginning, none of this is unexpected. It's obvious even through the television that the energy at his rallies is by turns ecstatic and hostile toward minorities. There have been numerous examples of protesters being beaten and manhandled going back at least six months. (Plug "Trump protest" into Youtube to see just how many incidents there are.) And Trump has encouraged it every step of the way.

It's unlikely that Trump planned all this out in advance. But he is a deeply instinctive politician and his steps in the last couple of days show a serious understanding of the Republican psyche. When it was reported that MoveOn had been involved in some of the planning for the Chicago protest and that local Bernie Sanders supporters had been involved, it took him no time to parlay that information into a conspiracy theory and feed it directly to the right wing lizard brain. He began to taunt the protesters at his subsequent rallies, admonishing the "communist" Sanders to "get your people in line, Bernie."

There is no evidence at all that the Sanders campaign had anything to do with the Chicago protest, and there has not been even the slightest amount of violent rhetoric or behavior at any Sanders events. Nonetheless, in the right-wing media, the protesters are now called "infiltrators" and "outside agitators" and a narrative is taking shape of normal political protests being acts of sabotage against Trump to deprive him of his constitutional right to free speech.

(The fact that every TV news network has covered his every utterance all day every day since last June should mitigate the offense, but so far that doesn't seem to have been considered.)

This is a very old tactic. As David Neiwert explained:

Never mind that Trump has specifically encouraged the violence, telling reporters at a press conference that "we need a little bit more of that."

The story we'll be fed as at least "the other side" will be Trump's: that the leftist "thugs" were responsible for the violence. And we all can see where this is going: As justification for further and more intense violence.

There is a long history of this with the fascist and proto-fascist right. Indeed, martyrdom at the hands of the "violent left" was a cornerstone of early Nazi propaganda...

He goes on to tell the tale of Horst Wessel, a violent Nazi street fighter who was turned into a martyr to the cause when he was killed, allegedly by Communists. His death was used by the Nazi propaganda machine to great effect to portray the enemies of the Party as the real violent criminals. This victimization narrative was a major element of Nazi recruitment.

Neiwert takes the story back even further to the post-Civil War south and the origin of the phrase "waving the bloody shirt": "The demagogic practice of politicians referencing the blood of martyrs or heroes to inspire support or avoid criticism." Trump doesn't have a literal bloody shirt to wave ... yet. But it's probably just a matter of time.  The violence is escalating. At some point one his "his" people will get hurt.

(Reagan did say that although he refused to believe he'd actually said it until a tape of his remarks were played back to him. That's what you call "accidentally saying what you really think.")

This riot last night shows the fundamental difference between real Americans and the radical left. Trump supporters do not crash Clinton or Sanders rallies. Neither to Cruz supporters or other conservatives and Republicans.

“This has to be crushed … I don’t care whether these goons don’t like what the candidates are saying.   I don’t believe we should have to shut down just to keep the peace…. The goons need to back off and they need to be silenced.  Not the people on the side of law and order,”

And what of the media?  Will they play along? At first they did seem to be shaken by the events of the last couple of weeks as the violence began to escalate at the rallies. But they're settling back into their usual "both sides do it" groove, which is exactly what Donald Trump is hoping for. Last evening on CNN, Poppy Harlow presented the story this way:

The presidential campaign today just took another twist on the Republican side frontrunner Donald Trump and Democrat Bernie Sanders used the Sunday morning talk shows to day to take swipes at one another. At issue Trump's claims that the Sanders camps is responsible for the escalating violence and protests at Trump rallies over the week-end. Sanders puts the blame squarely on Trump's shoulders.

People have been wondering how Trump could possibly pull the Republican coalition back together if he ends up with the nomination. If he can get the media to help him make the case that he is a victim at the hands of "the left", if only to those who traditionally vote Republican, it might not be as hard as it seems. It may seem obvious at the moment that Trump is creating this violent atmosphere with his incendiary rhetoric and his policies of hate and division. But if he plays his cards right, a few months down the line he might very have succeeded in muddying that reality enough to have most Republicans blaming Democrats for what he started.