How the U.S. became one of just two countries that allow direct-to-consumer advertising for prescription drugs 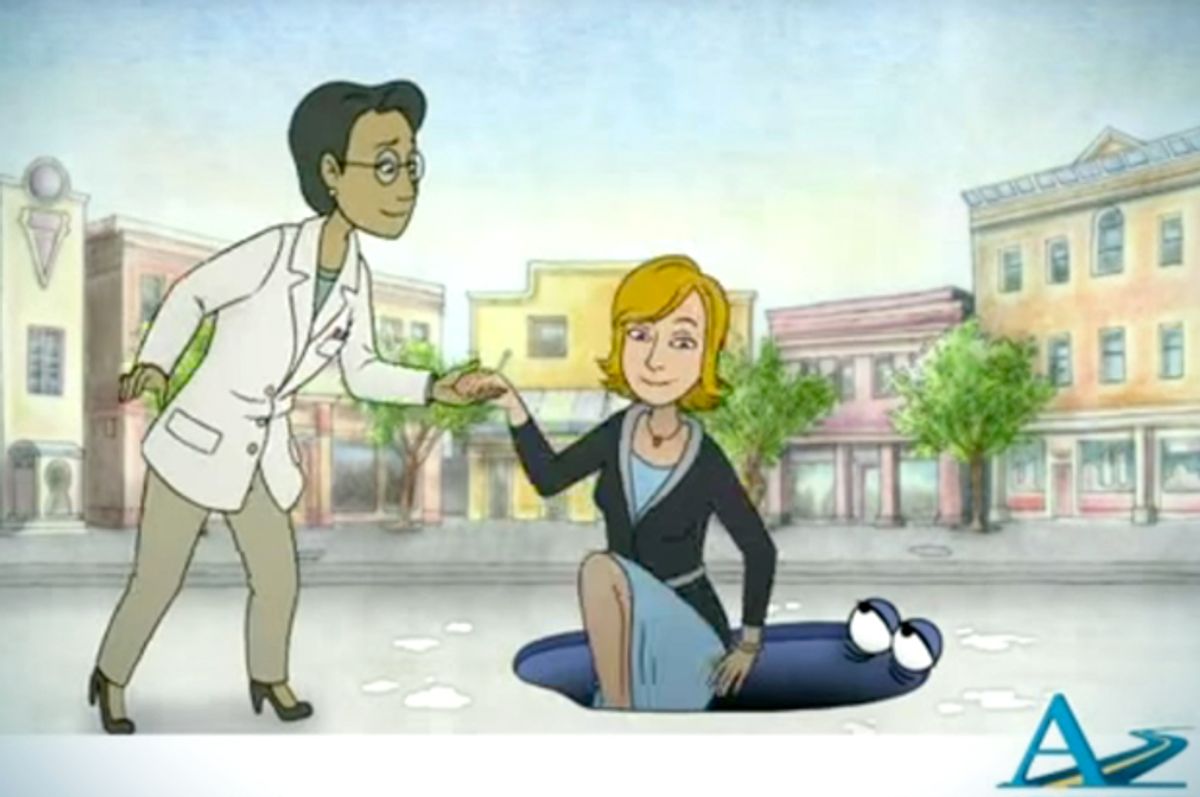 Who doesn’t laugh at drug commercials with their before-and-after scenes of life-changing improvements accompanied by numerous terrifying side effects? But these drug ads continue because they work. Beyond the overt manipulations, there are more covert ones—including techniques that diminish the impact of the required warning section.

Former advertising executive Jerry Mander observed that his ex-colleagues in advertising don’t care if you think their commercial is ridiculous or even false, because the image of the product goes into your head anyway, and your insides will always carry this “neuronal billboard.” Mander, in his 1978 book "Four Arguments for the Elimination of Television," instructed us that TV commercials must be viewed with what he called “sensory cynicism.”

Nearly two decades after Mander’s book was published, a new kind of TV commercial—one requiring a different level of sensory cynicism—appeared in the United States. In 1997, the Food and Drug Administration implemented new rules for direct-to-consumer advertising for prescription drugs. These new rules required that the ad need only mention the major risks and prevalent adverse effects, provide a toll-free number, refer to other information sources, and state the need to see a medical professional. Those new rules made it possible to run a TV drug ad.

The task for drug advertisers was how to meet the requirement of stating major risks and prevalent adverse effects in a manner so that viewers do not care about them, ensuring the warning section will not interfere with the placement in viewers’ minds of those billboards of life-changing improvements.

While the FDA has scolded drug companies for using blatant techniques to distract viewers away from the warning section, STAT (“How Drug Ad Narrators Take the Scariness Out of Side Effects”) notes, “The FDA can’t do much about ads that bore consumers into ignoring the side effect lists.” Health and medicine publication STAT details how “the warning section may be written with more complex sentence structures, to make it harder for viewers to absorb.” STAT quoted Ruth Day, a cognitive scientist at Duke University who has studied drug ads: “There’s a shift in how the voice is used to make it easier to understand the benefits and less easy to understand the risks.” So, for example, a hurried warning narration makes it much harder to remember the warning section.

A major technique used to weaken the impact of the warning section is for it to be reported by an off-screen voice. In contrast, we routinely see a person having life-changing improvement after taking the drug, and seeing that person’s transformation creates a mental billboard. These techniques are exemplified in an often-broadcasted commercial for Abilify, advertised as an antidepressant booster medication (for which it was FDA approved in 2007). This commercial does not inform viewers that Abilify is an antipsychotic drug, originally approved by the FDA in 2002 for schizophrenia. Instead, the ad tells us, “Approximately 2 out of 3 people being treated for depression still have unresolved symptoms”—an assertion we hear and also see written on a blackboard. And the ad directs itself to depressed people for whom an “antidepressant alone is not enough”—this also accompanied by a visual, a 6-second blackboard scene showing a list of well-known antidepressants plus a container of Abilify.

In this 75-second Abilify commercial, over 40 seconds are used for the required warning list that includes increased suicide, stroke and other “life-threatening reactions.” However, simultaneous to the warning list being reported by an off-screen voice, we see a once very sad woman now enjoying her life with her family and friends and at work. When the warning list is completed, we see a close-up of this attractive woman speaking directly to us, “Adding Abilify has made a difference for me.”

Abilify has grossed over $7 billion annually, become one of the best-selling drugs of all time, and until recently was America’s top-grossing drug (it is now No. 2 position behind Sovaldi, the hepatitis C drug).

Big Pharma and the Ad Industry: A Marriage Made in Hell

How did the United States in 1997 become one of just two countries that allow direct-to-consumer advertising for prescription drugs? In 1994, with the Republican Party’s takeover of Congress, House Speaker Newt Gingrich attacked FDA regulations, and President Bill Clinton offered no resistance to the FDA holding hearings in 1995 on direct-to-consumer advertising for prescription drugs, which Julie Donohue described in 2006 in the Milbank Quarterly:

Officials heard testimony from pharmaceutical and advertising industry representatives, consumer organizations, medical societies, and academics...By 1997, those FDA officials who were reluctant to open the floodgates to prescription drug advertising on television felt increased pressure from a variety of sources to ease the regulations and permit broadcast advertising.

Big Pharma, historically, has either applied financial and political pressure to politicians and regulators so as to create laws and rules that benefit them, or they simply have boldly broken laws. Pro Publica details drug companies’ largest fines for their criminal actions, including: the intent to defraud or mislead; failure to report safety data; and the often-repeated, illegal marketing for unapproved use.

Peter Gotzsche, in his book "Deadly Medicines and Organized Crime: How Big Pharma Has Corrupted Healthcare," makes a case for Big Pharma being guilty of racketeering. Gotzsche quotes Peter Rost, former vice president of marketing at Pfizer who turned whistleblower against Pfizer and Big Pharma (see "The Whistleblower: Confessions of a Healthcare Hitman"). In a 2008 interview, Rost stated:

It is scary how many similarities there are between this industry and the mob. The mob makes obscene amounts of money, as does this industry. The side effects of organized crime are killings and deaths, and the side effects are the same in this industry. The mob bribes politicians and others, and so does the drug industry—which has been proven in different cases. You could go through a 10-point list discussing similarities between the two....It’s pretty scary that they’re committing crimes that cause [the government] to levy those enormous amounts of fines against them.

Given the criminality and immorality of Big Pharma and the amorality of the advertising industry, do we really want to give this mob the extraordinary power of direct-to-consumer advertising on television?

Bruce E. Levine is a practicing clinical psychologist. His latest book is "Get Up, Stand Up: Uniting Populists, Energizing the Defeated, and Battling the Corporate Elite."