The payback candidate: Trump's campaign is for conservatives seeking revenge on everyone they think disrespects them

Trump's running to get revenge on everyone who laughed at him, and that's why his supporters identify with him 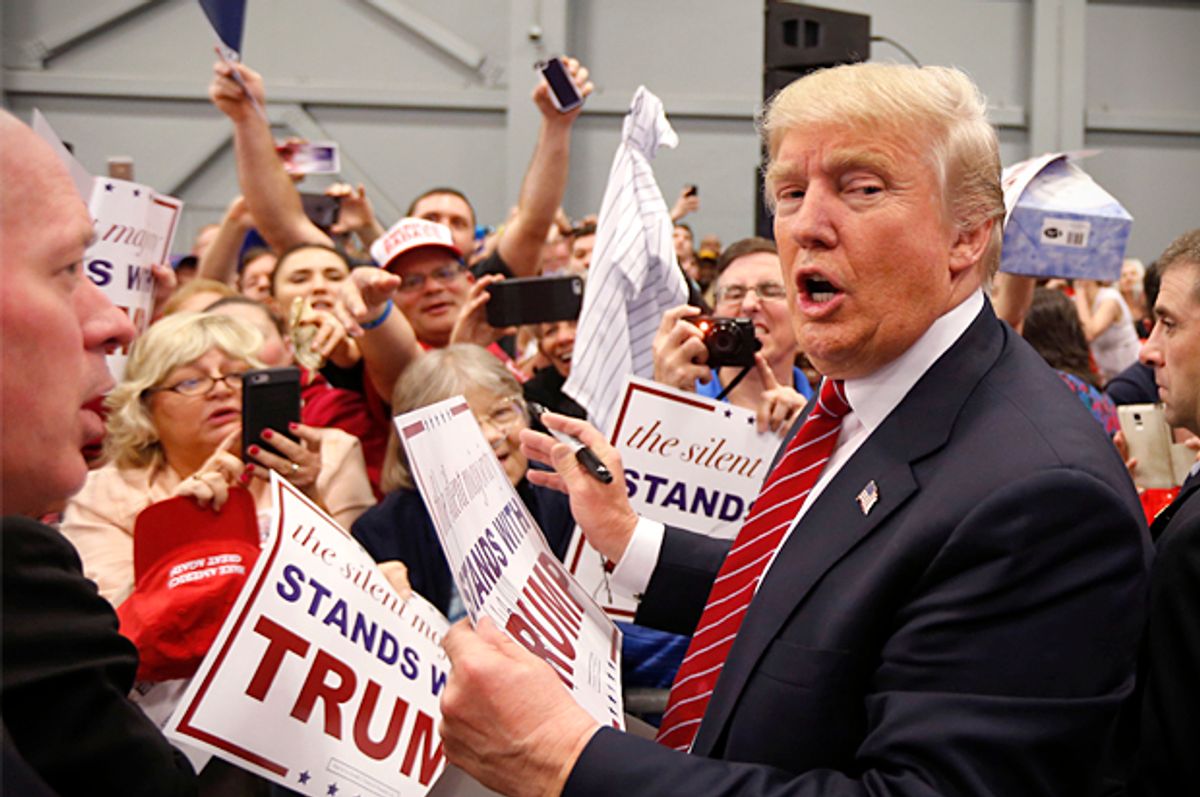 Over the weekend, Maggie Haberman and Alexander Burns published a fascinating story in the New York Times about how much of Donald Trump's presidential bid is rooted in his desire to be taken seriously and his resentment against political elites, both on the left and right, who see him as a joke.

"Mr. Trump’s campaign is driven by a deep yearning sometimes obscured by his bluster and bragging: A desire to be taken seriously," they write. Events in recent days suggest that since that will never actually happen — even as people fear Trump's rise, they still don't see him as a legitimate or serious political thinker and never will — his campaign has turned into an act of revenge against those who shun him.

Trump's personal motivations are fascinating, but what is even more so is how much his pettiness, his hurt ego, and his desire for revenge on those who think aren't giving him his due is what compels his supporters to rally around him. A lot of his support comes from people who see themselves in him: People who believe they — white conservative Christians who shun city life — deserve to be at the center of American life and culture, but look out and see a world where the president is a black man from Chicago, the charts are ruled by Rihanna and Beyoncé, and Lena Dunham is a celebrity.

The modern conservative movement is filled with people who believe they are due deference from the rest of us but are getting mockery instead. The conservative media has stoked this narrative of cultural resentment for decades, too. "Liberal elite" is a common catchphrase on the right. Some might think that term is an economic one, but in reality, it's a cultural one. The "liberal elite" is mostly composed of people who belong to the middle class: Journalists, college professors, artists, even lawyers, most of whom are not millionaires. Meanwhile, the right absolutely hero worships conservative billionaires like the Waltons, the Kochs, and yes, Donald Trump.

No, the "liberal elite" is a term of cultural resentment, rooted in a thwarted sense of conservative entitlement. It's backed by this narrative that there once was a time when America was "great" because the culture was controlled by white Christians, but at some point, usually the 1960s, the undesirables — hippies, artists, people of color, secularists, feminists, gay people — started taking over. This sense that something has been stolen and needs to be taken back is the organizing narrative of conservative populism.

Trump is tapping into the same narrative that propelled Richard Nixon into the White House, fueled the "Disco Demolition" night of straight white men burning records associated with said "others," helped start the Moral Majority and the Christian right, and is the engine that drives right wing talk radio and the relentless rage machine of Fox News to this day. And while it's trendy, especially amongst those who believe the white working class is one pamphlet on democratic socialism away from leaving the Republicans, to say that it's based on economics, the fact is these flare-ups aren't quite as pegged to economic trends as one might think but can quite easily be linked to white conservative anger over cultural moments that remind them they are not the actual owners of American culture. With Obama to leave office soon in triumph, his legitimacy as not just the first black president but one of the greater American presidents secured, the anger is boiling over.

Trump's vendetta against the political elites for laughing at him perfectly echoes the larger white conservative anger over not getting the respect they believe they deserve.

And make no mistake: Trump knows this. He knows how to speak directly to his followers' anger at being disrespected and fear that they are being laughed at by the cool kids. He's not just encouraging his supporters to violently retaliate against protesters, but framing that violence as a way to get revenge against all those snooty hipsters who think they are so cool and are laughing at you, the salt of the earth white conservative Americans.

On "Meet the Press" on Sunday, Trump used this frame to justify an incident where a 78-year-old white man at one of his rallies sucker-punched a young black protester who was being escorted out by security.

"I will say this, I do want to see what that young man was doing," Trump told Chuck Todd. "Because he was very taunting, he was very loud, very disruptive. And from what I understand a certain finger was up in the air.”

"And that is a terrible thing to do in front of somebody who, frankly, wants to see American made great again," he added.

While he claimed he wasn't condoning the punch, it's clear from this language that he was at least excusing it. The narrative is crystal clear here: Young people, especially young black people, owe older white conservatives respect and deference and failure to give it is so outrageous that it justifies reacting with violence.

Another interesting aspect of Trump's escalating rabidity on this is his focus on Bernie Sanders, or more specifically, Sanders supporters.

Bernie Sanders is lying when he says his disruptors aren't told to go to my events. Be careful Bernie, or my supporters will go to yours!

Trump continued this line of attack in person, calling Sanders a "communist" and saying, "You know where [the protesters] come from? Bernie's crowd. They're Bernie's crowd."

Sanders has denied the accusations, pointing out correctly that it's Trump's supporters who are inciting the violence. But it's interesting that Trump is going after Sanders, who is still not expected to win the nomination, over the frontrunner Hillary Clinton on this.

But in terms of stoking culture war resentment, this move makes total sense. Sanders's supporters are younger and perceived as hipper by the larger public. Since Trump is pushing the "hipsters are disrespecting their conservative elders who made America great" narrative, it makes way more sense to go after Sanders supporters than Clinton's supporters, even though that defies the usual campaign logic of attacking the frontrunner of the opposing party.

"I love this country. We're going to make this country great again. It's payback time," Trump said over the weekend at a Dayton event. It was a telling line. "Make America Great Again" might be the official Trump campaign slogan, but "It's Payback Time" is the real one that is driving not just the candidate, but his supporters.