The Trump violence surge: Don't treat this like it's anything close to normal 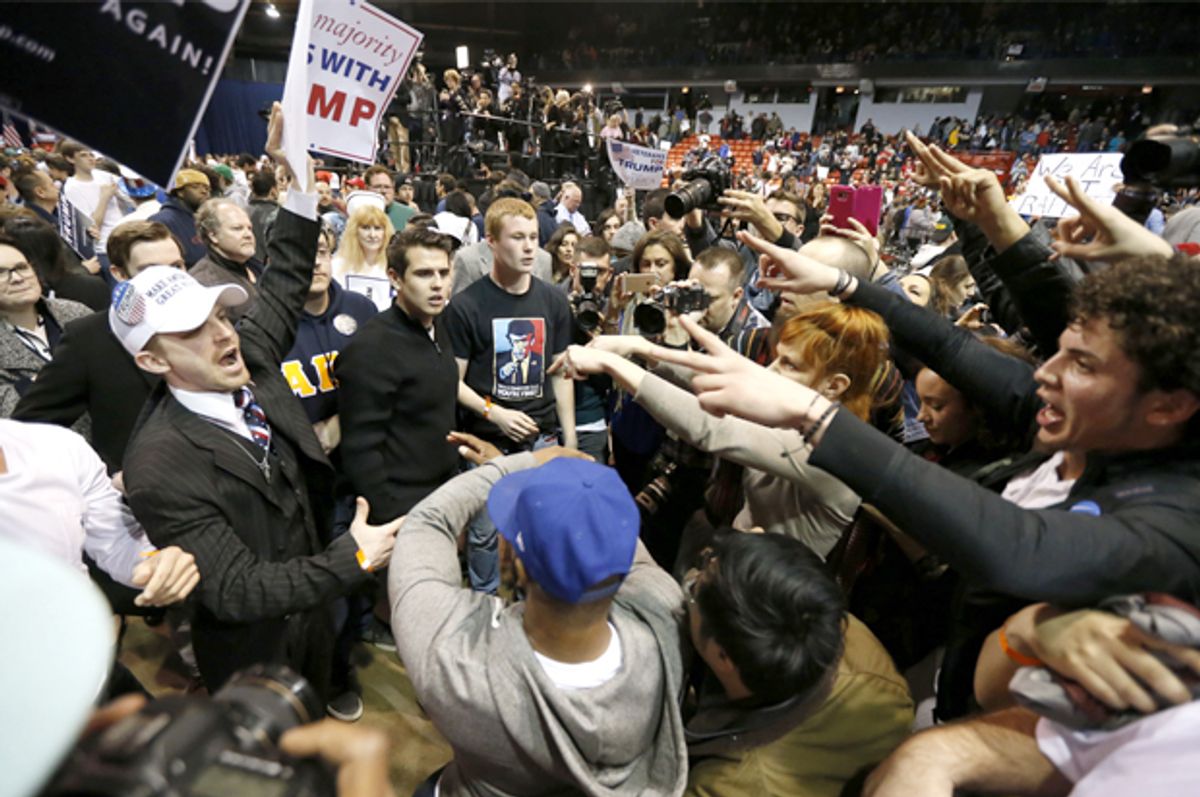 After last week’s Republican presidential debate, Bloomberg Politics managing editor Mark Halperin slapped together one his proprietary debate “report cards,” condensing the candidates’ two-hour performances down to a single letter for the benefit of people who want their political analysis as shallow and gimmicky as possible. The clear winner of the evening, in schoolmarm Halperin’s view, was Donald Trump, who received a solid A for his efforts. Trump showed “toughness and optimism,” he wrote, and “played it safe.” Halperin’s bottom line: “Critics will howl, but, specifics aside, he [Trump] sounded sufficiently reasonable and generally informed to win the nomination.”

The phrase “generally informed” has no business being in that sentence, but the real crime committed by Halperin here is describing Trump and his debate performance as “sufficiently reasonable.” He wasn’t the insult-spewing fire-breather we’ve seen in past debates, but much of what Trump actually said was insane, dangerous, or both. The most frightening moment of Trump’s “sufficiently reasonable” performance came when he was asked whether he bears any responsibility for the acts of violence that are occurring with greater frequency at Trump campaign events:

TRUMP: I hope not. I truly hope not. I will say this. We have 25-30,000 people – you've seen it yourself. People come with tremendous passion and love for the country, and when they see protest – in some cases – you know, you're mentioning one case, which I haven't seen, I heard about it, which I don't like. But when they see what's going on in this country, they have anger that's unbelievable. They have anger.

This is a repulsive statement from beginning to end, and not a single one of Trump’s rivals uttered a syllable in protest. Sandwiched in between perfunctory disavowals of the violence that has happened at his campaign events, Trump offered a lengthy rationalization for why that violence is happening. He talks about it as a sort of inevitability, something to be expected as part of a movement that appeals to and leverages the anger of its supporters. You love your country, you’re angry, you hit someone… well, that’s because you love your country and you’re angry. The trade deals and the taxes made you do it.

As for the people on the receiving end of the violence, Trump called them “bad dudes” who are “really dangerous” – they are “big, strong, powerful guys doing damage to people.” Framed in those terms, sucker-punching a protester as he’s being escorted from a Trump event almost sounds justified. I’m angry! He’s dangerous! I love my country! He’s a bad dude! If you’re a Trump supporter with a chip on your shoulder, the candidate has given you more than enough passive encouragement to translate whatever feelings of anger or frustration you might have into an act of physical violence. Throw in a healthy dose of racial tension and the probability of violent outbursts becomes dangerously high.

Everything Trump says about anger and voter frustration is the precise opposite of how politics are supposed to function in a representative democracy. Our system of government and elections is specifically designed to channel popular anger away from violent expression. Pissed off because you lost your job? Vote the bums out. Livid over your wages being cut? Vote the bums out. The plant packed up and moved to Mexico? Vote the bums out. Trumpism lures people in with that promise of electoral retribution and then nudges them towards acts of physical confrontation.

“I’d like to punch him in the face,” Trump announced at a Nevada rally as a protester was being removed. “If you see somebody getting ready to throw a tomato, knock the crap out of them,” Trump told his supporters at an Iowa rally, adding: “I promise you, I will pay for the legal fees.” At a rally last Friday, Trump explained that “part of the problem and part of the reason it takes so long [to remove protesters] is nobody wants to hurt each other anymore.” This past weekend saw a Trump event in Chicago canceled as protesters and campaign supporters got into fistfights. Trump denies responsibility for all this even as he takes to ensure that the violence keeps happening – on "Meet the Press" he said he was considering making good on his promise to pay the legal expenses for a supporter who assaulted a protester. At a Trump rally there is no taboo on violence. It’s celebrated, and it’s excused. And the loudest champion of this political violence is the candidate himself.

That’s dangerous enough on its own, but the greater threat comes with any movement towards normalizing this sort of rhetoric and behavior. Trump is trying to make all the blood and bruises seem routine. He’s trying to make acts of assault and brutality seem like a product of the political environment rather than his own provocations. The fact that Trump served up a barely concealed defense of political violence at last week’s debate is appalling. The fact that none of the other candidates condemned him for it is deplorable. And the fact that he succeeded in convincing an influential journalist that he sounded “sufficiently reasonable” while doing it is terrifying.