Trump protesters are heroes: They're reminding voters how much of a monster Trump is

Protests at rallies may provoke conservative backlash, but they also expose Trump's heinousness 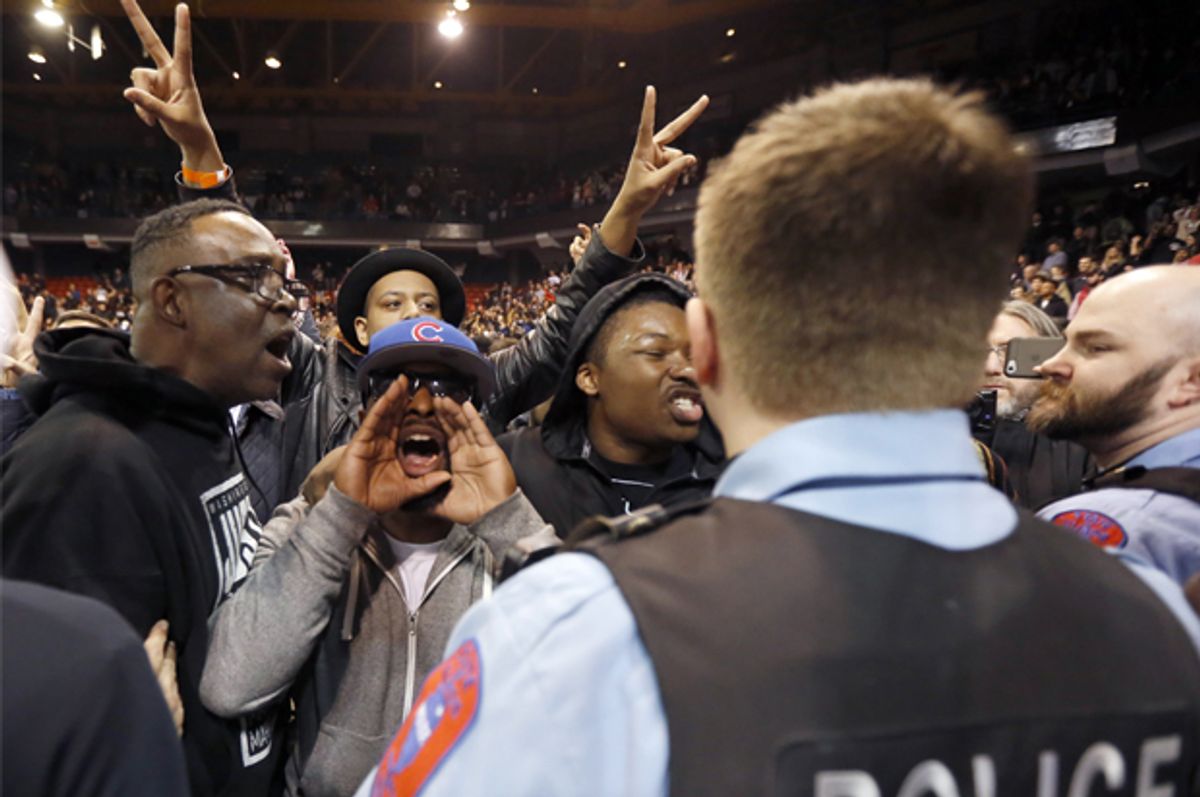 Protesters against Donald Trump shout at Trump supporters after it was announced that the candidate's rally was canceled due to security concerns, at the University of Illinois-Chicago, March 11, 2016. (AP/Charles Rex Arbogast)
--

The shutdown of Donald Trump's Chicago rally and the ensuing violence that broke out has created a response that is no less disappointing for how predictable it is: Conservatives blaming protesters for being provocative instead of blaming Trump for incitement, cowardly mainstream pundits tutting about "both sides" sharing blame for the violence, and liberal worrywarts begging the protesters to cut it out for fear they're making the rest of us look bad. But while this liberal worry might be understandable, it's misplaced. The protesters are putting themselves on the line to remind the public exactly what kind of proto-fascist monster that Trump really is.

Charles Pierce of Esquire, who I otherwise agree with on most things, wrote a piece scolding protesters for going inside Trump rallies, saying they're being "played for such suckers" and that "his campaign gains strength from it, like some science-fiction monster that absorbs the energy of whatever attacks it and then uses it to destroy."

Jonathan Chait wrote a similarly scolding response, aligning the protests with the supposed scourge of  "political correctness" that is geared more towards censorship than the values of free discourse in American society.

And historian Kevin Kruse was reminding people that Trump wants protesters to disrupt his rallies:

Trump *wants* disruptions from protesters. He uses them to validate campaign & supporters' sense of victimization. https://t.co/xD6mTGWNMz

It's easy to understand why liberals would be concerned about the violence. As Rachel Maddow made very clear, Trump appears to have orchestrated the entire Chicago situation, hoping that violent conflict would help rally right-wing troops to his side, a strategy that clearly is working. So yes, he did manipulate those protesters into doing exactly what he wanted.

And yes, the right-wing media is going nuts, declaring that the problem is the protesters supposedly provoking right-wing violence with the irritating hippie ways, and not the fact that Trump is openly encouraging his followers to treat disagreement as a disrespect that justifies a violent putdown.

And yes, some in the mainstream media are doing that deplorable "both sides do it" dance, even though this is clearly a one-sided phenomenon. Under the circumstances, it's tempting to tell protesters to pack it in, because they're never going to get a fair hearing from a media that's sometimes more worried about getting irate conservative emails about how they're not "fair and balanced" than they are reporting the facts.

The timing of Trump's Chicago stunt is likely not a coincidence. Ted Cruz has been sneaking up on him in the polls and Trump needs a big win in Tuesday's primaries to fend Cruz off. Stoking political violence in Chicago that he could then use as grounds for a coded racist appeal — "thugs" are disrespecting good white Americans! — is a smart move to rally support and run away with the Republican primaries.

But I don't think it's naive or Pollyannaish to think that what wins a Republican primary is not what is going to win a general election. No matter how much cowardly mainstream pundits might squawk about "both sides" doing it, it's hard to really sell that message when only one side is actually encouraging violence, while the other side is openly and aggressively denouncing it. And for every media coward hiding behind "both sides do it," there are far more stories that make it clear that this something that the Trump campaign and no one else is doing.

What a lot of the hand-wringing misses is that the real danger with Trump is that he will be able to successfully hoodwink the media and the public into thinking he's not so bad. The other Republican candidates have already agreed to support him if he wins the nomination. It's not impossible to picture a situation where, if Trump minds his manners a little more and the Republican party backs him, he will snap into the "mainstream candidate" role, start getting treated with more respect by the press, and ride a "he's not that bad" wave right into office.

But if his supporters keep sucker punching protesters at rallies, that will be an infinitely harder trick to pull off.

Trump might be playing the protesters to win the Republican nomination, but they are playing him as well, drawing out his ugly side and getting headlines about violence that will stack up so high that it will be hard for his campaign to paper over this when it comes to the general election. Yes, it's really easy to see the historical links between Trump's campaign and that of George Wallace or Barry Goldwater's, whose supporters were recorded spitting on and name-calling black delegates at the Republican National Convention in 1964. But it's also important to remember that Wallace and Goldwater lost. Most Americans reject overtly violent and racist demagogues. Trump's popularity with conservative voters shouldn't be mistaken for popularity with the public at large.

Both Bernie Sanders and Hillary Clinton made clear, firm statements about this over the weekend during a CNN town hall. When Jake Tapper tried to bait Clinton with a "both sides do it" question, she wasn't having it, saying, "Donald Trump is responsible for what happens at his events. He is the person who has for months now been not just inciting violence, but applauding violence."

Sanders, who has been directly accused by Trump of sending protesters to be disruptive, called Trump a "pathological liar," but then reasserted that it shouldn't even matter, because, "Donald Trump is literally inciting violence with his supporters."

Sure, there are a couple major things the protesters need to do in order to strengthen their case. The cheering for Trump's rally being shut down was a bad look. Protesters need to be clear that they are there to protest, not silence or censor.

And, as unfair as it may be, throwing punches back when Trump supporters come at you has a strong chance of backfiring. Nonviolence is often idealized as a strategy chosen for moral reasons, but in reality, it was developed largely for strategic ones — it's a lot harder for the media to play the "both sides do it" card when one side is throwing punches while the other side refuses to fight.

But while these fixes can make things a lot better, protesters are already doing a great service by showing up at Trump rallies. Whenever Trump supporters give into the urge to scream at, racially and sexually abuse, or violently attack protesters, they remind the public at large how hateful Trump and his supporters really are. Trump's people can say that protesters have it coming until they're blue in the face, but it's impossible for most people to really believe that when they watch that video of a Trump supporter sucker punching a protester who is clearly not a threat to anyone.

Instead of scolding the protesters, we should be helping and encouraging them. Not everyone is brave enough to take a punch to keep Trump out of office. Those who put themselves on the line like that are heroes.