While America is distracted by the Trump freakshow, Indiana just passed one of the most restrictive abortion bills in the nation 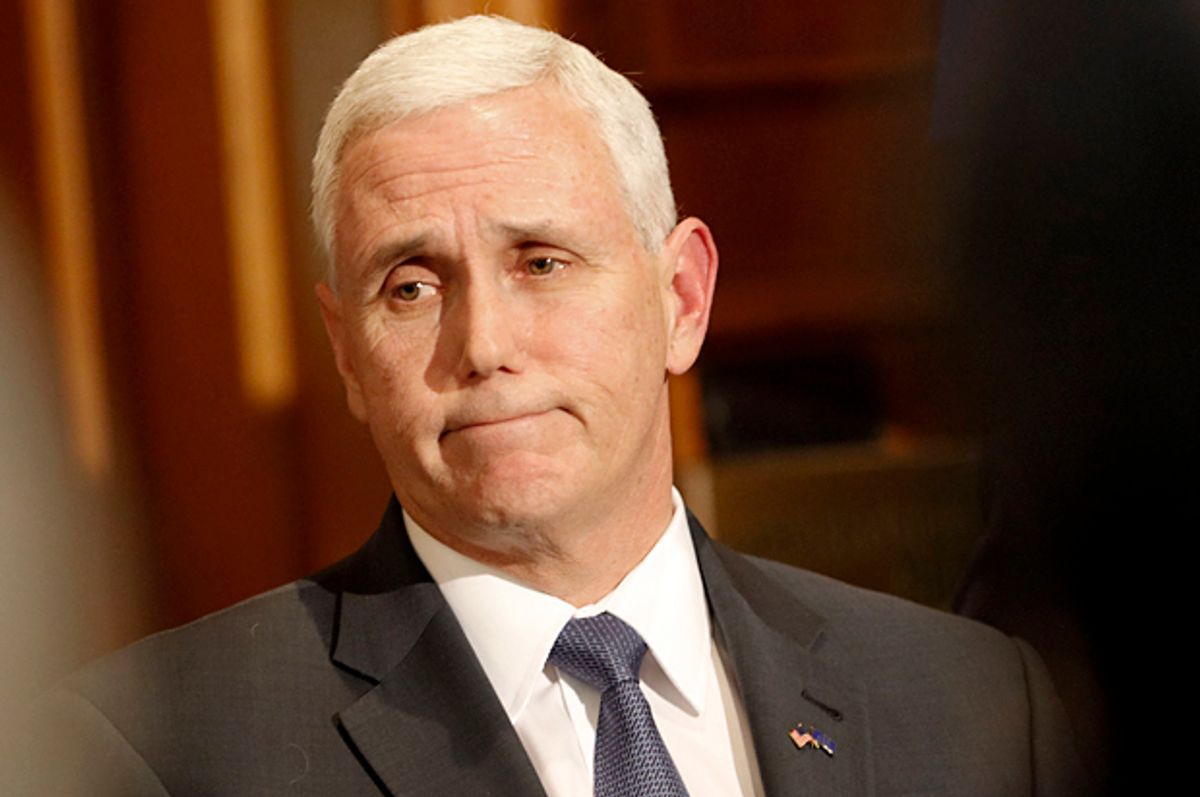 While most of America observed in shocked horror as Donald Trump's ignorant mobs obediantly carried out the fascistic orders of their orange cult leader to pummel and hurl racial epithets at protesters over the past several days, a terrible new bill slipped quietly into law, completely under the radar.

Frankly, it's not surprising given our national fascination with narcissistic reality show divas like Trump that one of the most restrictive anti-choice, anti-abortion laws is due to be signed any minute now by Indiana Gov. Mike Pence -- and no one seems to have noticed.

HB 1337 was approved by the Indiana legislature late last week, roughly at the same time as Trump's supporters decided to lash out against protesters. The legislation authorizes an entire menu of grotesquely unconstitutional anti-choice TRAP(Targeted Regulation of Abortion Providers) laws, as well as new forms of authoritarian, misogynistic devilry, each of which could be defined as reproductive Jim Crow laws. Put another way, the new Indiana bill is in keeping with a series of laws that don't outright ban abortion, but which makes it really, really difficult to have a safe and legal abortion.

In this case, however, this one piece of legislation contains various provisions that've been passed individually elsewhere, while adding all new and all horrifying items to the mix, including what amounts to a ban on all abortions for purely elective reasons -- and if the fetus suffers from any disability whatsoever. We'll circle back to this one.

First and foremost, HB 1337 requires that women who undergo the procedure must also pay for -- get this -- the burial or cremation of the fetus. It goes without saying that the law adds an additional financial disincentive to having an abortion, in this case additional expenses that could easily make it monetarily prohibitive to terminate a pregnancy. There's also the macabre notion of paying for a mini-funeral for what amounts to, in most cases, a microscopic clump of undifferentiated cells. This raises an interesting thought: Given that sperm constitutes half the genetic material of human life, should legislators also require half-funerals every time men in Indiana have orgasms? Of course that'll never happen because laws like HB 1337 are as much about oppressing women as they are about rescuing every zygote.

Like other standalone forms of government insertion into private medical decisions, HB 1337 requires the now commonplace fetal ultrasounds. It also mandates that women listen to the fetal heartbeat before proceeding with an abortion. As we've discussed for several years now, this is pure intimidation. It's about Republican men asserting control over the bodies of women -- scolding and intimidating them by proxy, while also rubbing women's noses in their own alleged participation in infanticide.

It gets even worse.

The fetal heartbeat screening and the ultrasound procedure have to be conducted 18 hours prior to having an abortion. What makes this waiting period particularly vile is that previous TRAP laws have closed most of Indiana's abortion clinics, leaving just four counties out of 92 with abortion facilities. In other words, if you choose to terminate, you'll likely have to travel not-insignificant distances in order to find a clinic. From there, you'll have to bed down at a hotel or elsewhere while your 18 hour waiting period winds down. Yet another expense on top of the abortion itself.

As if that wasn't horrendous enough, it gets much worse.

The law also includes the TRAP mainstay requiring that abortion doctors enjoy admitting privileges at a nearby hospital. If they don't, it's illegal to perform an abortion, even if the other line items in the bill are precisely followed.

And finally, HB 1337 forces women to carry pregnancies to term, even if the fetus is seriously deformed or disabled. Here's the appropriate section of the law:

Prohibits a person from performing an abortion if the person knows that the pregnant woman is seeking the abortion solely because of: (1) the race, color, national origin, ancestry, or sex of the fetus; or (2) a diagnosis or potential diagnosis of the fetus having Down syndrome or any other disability. Provides for disciplinary sanctions and civil liability for wrongful death if a person knowingly or intentionally performs a sex selective abortion or an abortion conducted because of a diagnosis or potential diagnosis of Down syndrome or any other disability.

This essentially closes the figurative noose. If HB 1337 is signed by Mike Pence, Indiana will have effectively banned all abortions except for cases of rape, incest or threat to the mother's life. And even in those cases, women have to listen to heartbeats; they have to be unnecessarily poked and prodded beyond the medically required aspects of the abortion procedure itself; they have to travel great distances and sit through punitively long waiting periods; and all for the sake of maintaining the last shred of control over their own bodies.

This is what's happening in state and local politics all across the nation, and it's happening with almost zero attention from the left. In fact, there are several Republican legislators who are lobbying against the bill for overreaching, but that's about it. No hashtags. No Facebook outrage. Nothing. And it's too late now.

Indeed, the real political action continues to occur unnoticed while nearly all attention is focused on presidential politics. Without a Pied Piper named Sanders, Obama or Clinton to follow, state and local matters tend to go by unnoticed, partly because state politics aren't sexy or compelling enough (though they should be), and partly because social media doesn't reward state political stories with retweets, likes or shares. It's difficult to put into words how unforgivable this is.

Taken together, it's no wonder why Republicans have easily seized control over state politics since 2009, knocking full Democratic control over state politics down to just seven trifectas (both chambers of state legislatures and governorships). By contrast, Republicans enjoy 23 such trifectas. And, again, Democrats are just as blameworthy as Republicans, refusing to turn out to vote in midterms and off-year elections. If progressives seriously want a political revolution, and if they aren't just playing electoral grabass because it's the trendy thing to do, it has to be much more than about vocally supporting a presidential candidate. The revolution has to bleed through to all levels of government, especially the dark, treacherous levels where awfulness like HB 1337 is being passed, practically without opposition.