The new biography, "Trouble Boys," is an unflinching, uncompromising look at the band and the legend 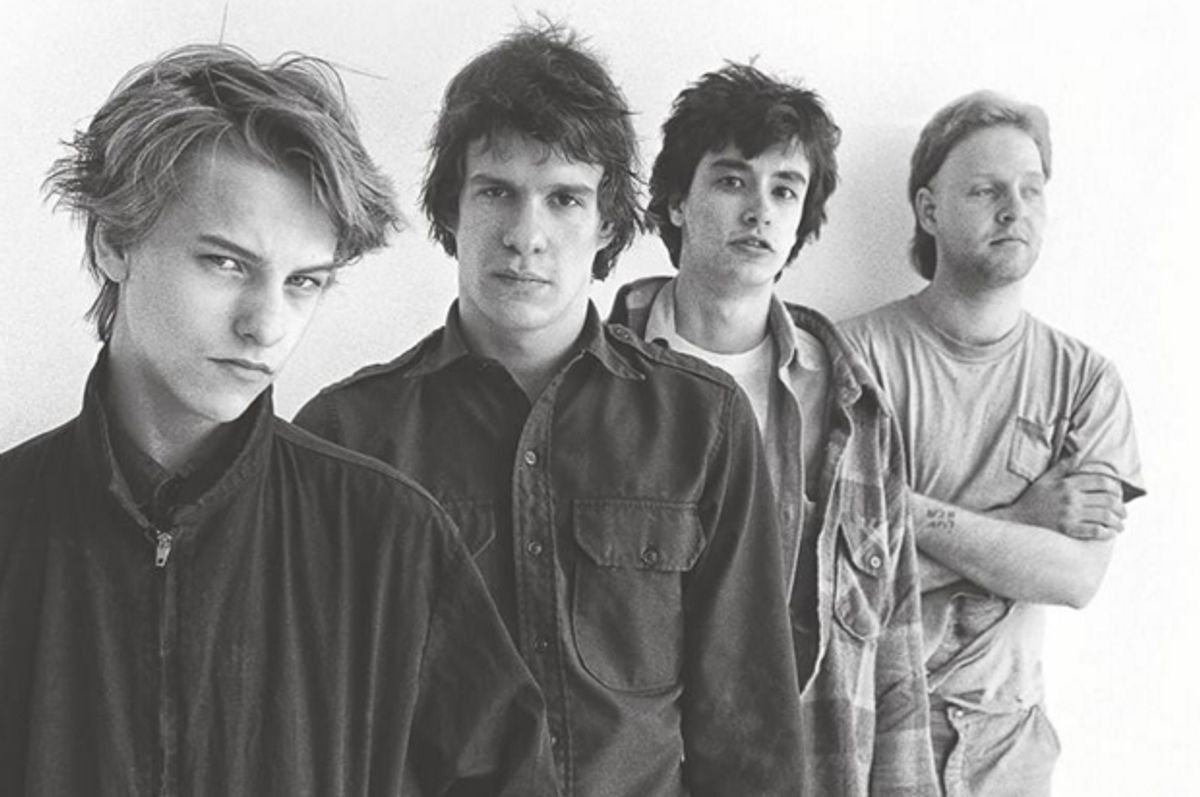 The Replacements, the alternative rock heroes that emerged out of Minneapolis in the 1980s, remain one of rock 'n' roll’s legendary bands. The mythos was created by a combination of classic elements: the stories of amazing gigs, where you believed they were one of the best bands in the world; the tales of drunken outings, filled with medleys of hits from the ‘70s; the discography of albums that influenced bands and musicians from Kurt Cobain to Titus Andronicus, Billie Joe Armstrong to the Hold Steady. Lorde covered “Swingin’ Party” from 1985’s “Tim”; Wilco’s Jeff Tweedy’s declared onstage, “Everything we do is based on the Replacements.” The songs continue to attract new fans and still hold up 30 years later.

“Trouble Boys,” the new biography about the Replacements, dismantles (or upholds!) the myths with an artful, patience diligence. Author Bob Mehr painstakingly tells the entire story of the band, and delves into every relevant detail necessary in order to accomplish this task. It took Mehr over a decade to complete his research, talking to literally hundreds of individuals. The book is not authorized, but rather written “with the participation of.” That doesn’t just mean that the band members granted interviews, but also that they clearly gave the nod to anyone else in the continuum of their lives and history to speak to Mehr. This allowed him to follow the story wherever it went, for good, bad and tragic.

There’s no spoiler here: Those who followed or cared about the band already know that there’s an awful lot of tragedy around the Replacements, from the way success seemed to elude their grasp, to the dismissal and departure of founding guitarist Bob Stinson. Mehr’s approach to this is unstinting and unvarnished--this isn’t a glossy feel-good story, there’s no artful spin to the tales. The reader will come out of the book not wondering why the band didn’t make it, but rather wondering how they managed to go as far as they did.

“Trouble Boys” opens with Bob Stinson’s funeral in 1995. Mehr starts here because Bob founded the band. He starts with Bob because he was the soul of the band. He starts with Bob because everyone who ever loved the Replacements wants to know what really happened with Bob, even if they already likely carry their own strongly held opinions on the subject. The book then digs deep into the family history and the childhood of each individual band member, because where you come from has a lot to do with who you are and who you become. No spoilers, but it is literally a wonder and a testament to a special brand of dogged inner determination that each member of the Replacements made it to adulthood.

This early background isn’t presented in a vacuum the way it is in some artist biographies, where the reader is never given any assistance in weighing the information or understanding why they’re being told something; the real art in Trouble Boys is how no detail is wasted or there simply because it was acquired. So a note about Paul’s mother’s pregnancy is immediately connected to a quote about "Bastards of Young," a detail about the Stinson kitchen that comes back to "Sorry Ma, I Forgot to Take Out the Trash," or an observation about Alex Chilton’s behavior next to a trash can on a New York street, which, of course, connects to the song named after him.

The book is insanely dense with this kind of detail, which Mehr doggedly closes the loop on, over and over again. Early in the book, there’s a paragraph about the history of rehab centers and why there are so many in Minnesota. This directly connects to why so many teens in the Minneapolis music scene had been in rehab programs, which gives further background to the band’s first show, played at a teen "sober dance," and all of this together explains how a song called “Treatment Bound” ended up on their 1983 "Hootenanny" album. This type of connection happens over and over again during the course of the book.

Along the way, "Trouble Boys" also relates necessary history regarding the Minneapolis alternative rock scene, because without it, the reader would be missing critical context. So the birth of Twin/Tone Records (who would sign the Replacements), the individuals who worked in and around the local music business, and the life and death of various clubs and music venues is presented alongside the rest of the tale. This includes the story of Peter Jesperson, the man who discovered the Replacements, who later became their manager, “fifth Replacement,” biggest cheerleader, and whose life was deeply impacted in a permanent way from his association with the band, as well as the role of other musicians who joined the band in the later years --  most important, that of Slim Dunlap, who stepped into the second guitar role after the departure of Bob Stinson.

It’s important to note that author Bob Mehr didn't grow up in Minnesota, didn’t live there, wasn’t part of the crowd. While some people might discount the authority of this book because of that, it’s actually one of its strengths. This distance means that Mehr has to work at recognizing, identifying and explaining the inside jokes and local references. He also doesn’t have to see these people every time he goes out to see a show, which makes it a lot easier when it comes time to reveal hard truths, or stories of a person’s younger days that might not shed a positive light.

Where the book shines the brightest is when it comes to talking about the most important part of the Replacements’ legacy: the music. There is wonderful, incredibly descriptive detail of recording sessions, and of the songwriting process. It’s here where Mehr’s appreciation of the band serves the material well, and that’s not meant in a negative way: someone who wasn’t a fan of the band wouldn’t be able to describe the songs in the type of bright, evocative detail that’s a highlight of Mehr’s music writing in general. But he also writes from the perspective of someone who’s been an informed observer of the band’s music for decades.

Someone who didn’t get the Replacements could not have written this book, period. Mehr is sympathetic to the story in that he gives it as much room as it needs, and unfailingly fills in the necessary detail, whether it’s through research, going through the archives, or hunting down friends from grade school, ex-girlfriends, or Minneapolis scenesters. (He even gets Winona Ryder on the record, whose role as some kind of indie rock Yoko Ono was, unsurprisingly, incorrect.)

Mehr’s affinity for the band is probably why "Trouble Boys" works double overtime to give each member of the band equal time. The book equalizes everyone’s role, and disabuses the prevailing myth that Paul Westerberg was some megalomaniacal war lord, stealing Bob Stinson’s band. It gives Tommy Stinson more credit than his age might have belied, particular in his role as “de facto musical director for the band before he hit puberty,” Westerberg says. “For the next ten years I’d be asking Tommy, ‘What chord does that start with?’” And it also unstintingly distributes the frustration with Bob Stinson’s role in the band even back as far as "Hootenanny," where Tommy semi-scouted Dan Murphy from Soul Asylum as a potential replacement for his brother, or during the "Pleased to Meet Me" sessions, where Tommy fired back at producer Jim Dickinson’s dismissal: “You don’t think I’m serious? I fired my fuckin’ brother. That’s how serious I am about this band.”

Don’t worry: There are plenty of tales of destruction, drugs, drinking, destroyed dressing rooms, and double-dares to suit the fan who loved that side of the Replacements. A classic is the time that storied rock critic Robert Christgau saw the band at First Avenue, whereupon Paul Westerberg announced that Chuck Berry had died and the band kicked into “Maybelline.” Mehr writes, “A panicked Christgau scurried to a payphone before he realized he was being put on.” Every detail of the apocryphal "Saturday Night Live" appearance is captured. The tour with Tom Petty and the Heartbreakers is filled in by Benmont Tench and Stan Lynch. If you have a favorite ‘Mats legend, it’s in here somewhere, guaranteed. “The stories of them being legless and then being able to get up and play a great show,” says Slim Dunlap, “that part of the legend was true.”

By the book’s end, though, your heart will be broken. You’ll be furious at the band’s inability to play it straight, to grab the gold ring, to step into the spotlight. You’ll understand exactly why the band’s career played out the way it did, but that won’t make you less angry about the lost opportunity, the songs left unfinished, the gigs we never got to see. The epilogue, usually the place in a biography for some ray of sunshine, will either make you weep or turn you catatonic, page after page, waiting for the roller coaster to come to a stop.

Not everyone will be thrilled with "Trouble Boys." The reader who’s just looking for a celebration of the chaos, the same way some fans used to come to ‘Mats shows demanding drunken spectacle, will probably be unsatisfied. There are so many people who are happy to continue believing in their own version of the truth, even if it’s completely wrong. That is rarely true more than it is with fans of the Replacements, because they were so loved and so hated and so much the band of the forgotten misfit, and it’s hard to let go of something that meant that much to you. But for everyone else, students of rock 'n' roll, or those who wondered what the big deal really was, "Trouble Boys" is a tremendous piece of research and writing, and absolutely the Replacements biography we’ve been waiting for.