Can Hillary stay in the race? If she loses Ohio and Missouri, Clinton's case becomes very, very tenuous

Imagine if somone wins the last 10 primaries, leads every general election poll, then gets denied by superdelegates 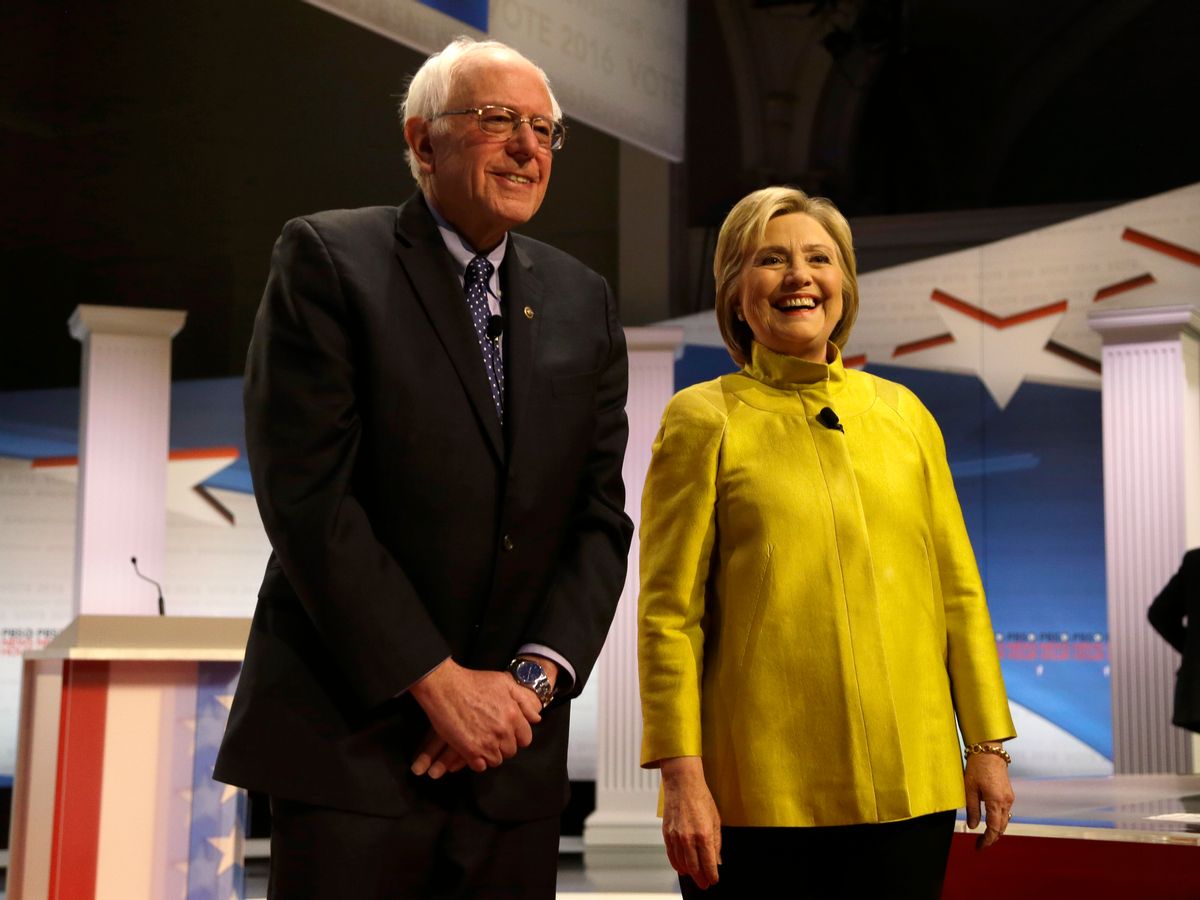 Attention all political pundits. Today affords you a shot at redemption: a chance to turn over a new leaf and even do some real reporting. For months you treated the Democratic race as a foregone conclusion.  For weeks you said nearly the same of the Republican race. You were wrong not just in your prophecies but in doing what you do. When you tell any candidate you know he can’t win because you’ve "done the math," you tell every voter her vote doesn’t count. As both parties teeter in their different ways on the edge of tragic choices, you do democracy itself a great disservice.

No one knows how these races will end. Even polls that persist in underestimating Bernie Sanders show Missouri and Illinois near dead heats and Sanders closing fast in Ohio. Should he win the Land of Lincoln and the Show Me State and exceed expectations in Ohio, it’ll be his second stunning upset in eight days. It turns out Hillary’s one stronghold -- other than K Street -- is the Old Confederacy. The last two of its 11 states also vote today. Ahead are contests in 24 states, the District of Columbia, Puerto Rico, the Virgin Islands and Guam. With the possible exception of Puerto Rico, she doesn’t hold a commanding lead in a single one. Many resemble states Bernie won going away.

Democracy isn’t algebra. Elections aren’t mere algorithms. A poll tells you more about the person who writes its questions than the few hundred who answer them or the millions who don’t. Polls have short shelf lives because people change their minds; gradually about issues, overnight about other people. Pollsters do message, not policy. They know we’re angry but haven’t a clue why. Here’s a hint: One party denies the reality of climate change, the futility of modern warfare and the humanity of millions of our fellow citizens. Neither will admit that our democracy is dying and taking our middle class with it. We need help making this choice, not predictions as to the choice we’re about to make.

While we’re on the subject of life’s mutability, a word about party rules: The first thing to know about them is that like Captain Jack Sparrow’s pirate’s code, they’re “more like what you’d call guidelines than actual rules.” This is perfectly legal and sometimes even fair. All conventions are gaveled open by temporary chairs under temporary rules because no convention can bind the next one any more than one Congress can bind the next.

So no current poll can tell you how many delegates each candidate will have and no current rule can tell you for sure what those delegates can or will do. Delegates elected in primaries or caucuses will surely vote as pledged. If one candidate has pledged delegates comprising more than 50 percent of all delegates, that should end the discussion and the process. If not, all bets are off.

Clinton’s and Trump’s fates may rest on legal processes or leaked tax returns or speech transcripts. Democrats may figure out that Clinton’s a neoliberal and they aren’t. Republicans may decide Trump is a fascist and they aren’t. No boss can defy the will of either party’s base without risking permanent, even fatal damage. But the history of political conventions makes one thing clear: a plurality is not a majority. Frontrunners arriving at conventions without majorities often go home empty handed for the simple reason that a majority of delegates don’t want them.

It would be hard to deny a candidate who piled up enough votes in early primaries to gain a plurality of pledged delegates. But imagine a candidate winning the last ten primaries and leading every general election poll being denied by superdelegates from the same national committee that from the first did all it could to rig the race. Or imagine superdelegates blindly following tradition to nominate a fascist who condemned their party to defeat, realignment and even dissolution.

I don’t know which candidates will make it to their conventions. Hearing pundits say the math is impossible for any of them reminds me that pundits are writers, not mathematicians -- and that in any case, politics is more than math. It also reminds me of a story from a long-ago primary, the last one I wasn’t running in myself that I cared this much about. In a Los Angeles hotel room in 1968, Robert Kennedy gave what would be his last interview before heading downstairs to claim victory in the California primary. Reporters said they’d seen the math and that while Kennedy led in the polls, Hubert Humphrey had the delegates all locked up. Bobby said he’d take his case directly to those delegates: “I’m going to chase Hubert’s ass all over the country. Wherever he goes, I’ll go.” I think it could have worked.

Whatever happens next, let Debbie Wasserman Schultz be the one remembered for shutting down debate.  Elite Democrats want the race over. Like the Republicans, they fear the bell tolls for them. This revolt is against both parties’ elites and they fight in part to save their privileged skins.  Clinton, in her usual high style, says she’d like to move on to the general election. Gullible pundits agree it would be best for Democrats. Even if she ends up their nominee, they can ill afford to lose Bernie. They think he draws her to the left on issues like Wall Street corruption, a living wage, health care and climate change. In fact, it’s the center to which he drags her and the whole party, all kicking and screaming as they go.

We can’t begin to fix the government or the parties till after the election. The press can begin to fix itself right now. They might begin with a week’s moratorium on reporting polls. It would be hard, but as with any addiction, they’d find time and energy for other things. Maybe they could put a little more heat on Trump to release his tax returns or Hillary her speeches; they might dig a little deeper into the economics of single-payer health care or the imminence of catastrophic climate change.

They might even learn what Bernie’s revolution is all about. It’s simpler than they may think; a response to another revolution in which Hillary, as it happens, played a key role. In that revolution, pay-to-play politics and neoliberal economics overthrew the New Deal coalition of Franklin Roosevelt. This revolution means to root out corruption and restore the social contract FDR helped write. Once they understand the choice, they can help illuminate it.