"Readjust his violent rhetoric?" Krauthammer asked, there's "No excuse" for not condemning it 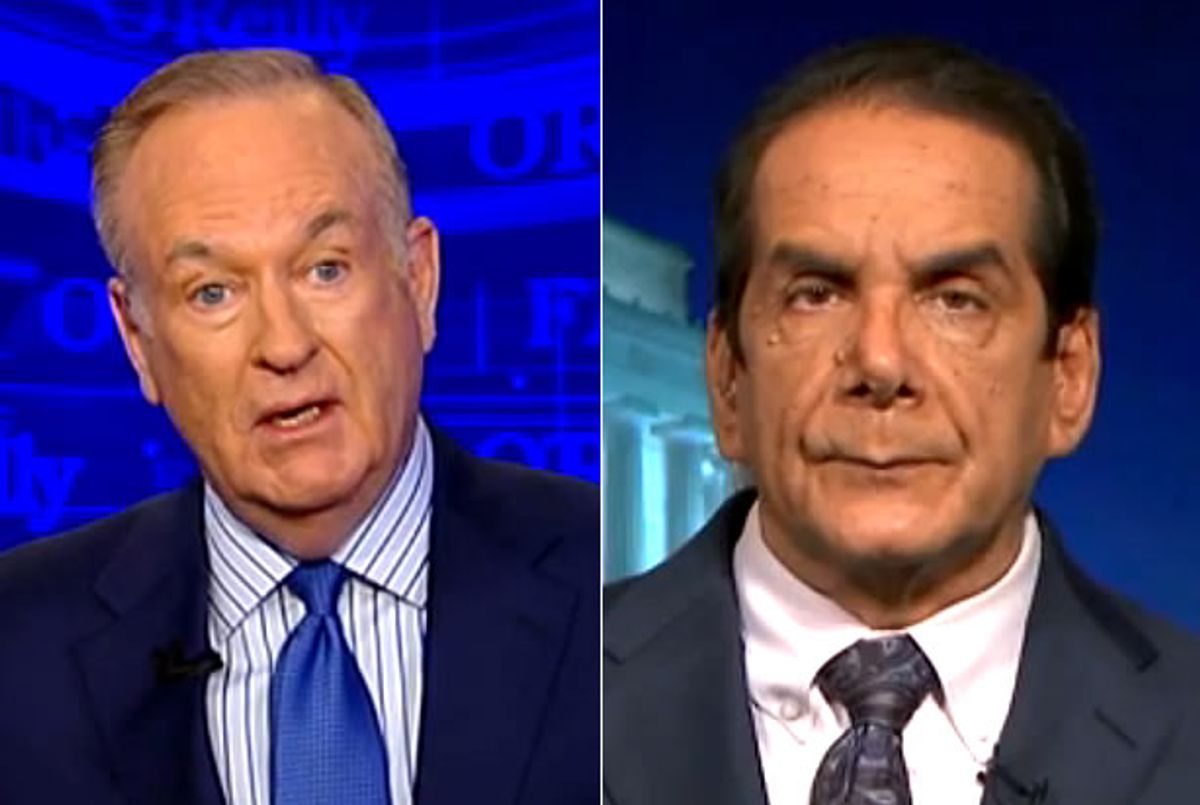 Charles Krauthammer was unimpressed, to say the least, by Bill O'Reilly's defense of Trump's violent rhetoric.

On Monday night's edition of The O'Reilly Factor, Krauthammer opened by commenting on Sarah Palin's condemnation of the "punk-ass thuggery" of far-left plants at Trump rallies, saying that "it's refreshing to hear Sarah Palin -- it's that kind of calm, reasoned political rhetoric that we need in this country, and it's so welcomed when we can hear it from her."

O'Reilly chuckled, but his mirth was short-lived, as Krauthammer immediately turned on the GOP front-runner himself. "There are two separate phenomenon here," by which he meant the organized "tactic of shutting the opposition down," much like what -- according to Krauthammer -- happened "in the 1920s and 1930s," and which is "happening on campuses all the time now, speakers who aren't allowed to speak," basically how "the left acts in a totalitarian way to control who speaks."

Such a phenomenon should be condemned, he added, but that's not what is happening at Trump events. The candidate himself is "winking and nodding and saying, 'In the old days, we carried them out on a stretcher,'" suggesting in no uncertain terms that "'We used to beat people like that until they weren't able to walk.'"

"We saw a guy on that tape sucker-punching a demonstrator in the face, and saying, 'If we see him again, we may have to kill him.'" When Trump was asked about it, he said "'I don't condone violence in the abstract,' [and] that's great, but he refused to condemn it, and that's unconscionable. Are you letting Trump off the hook for this?” Krauthammer asked.

“I’m not," O'Reilly shot back. "I’ve said he has to readjust his rhetoric."

“I’m trying to deal with this in a fair and balanced way,” O'Reilly said, despite having spent the majority of the program having done nothing of the sort. "So I think we're going to remove the word 'weaselly' from it."

"I'm not going to rebut the point, I'm going to illuminate the point," he continued. "Trump speaks in an emotional manner -- he talks like this, 'bang, bang, bang' -- and he doesn't have a filter. He doesn't think sometimes before he speaks, he doesn't understand that his words can carry threats. But I'm not going to sit here and say he's responsible for what happened in Chicago."

O'Reilly added that Trump only failed to condemn his supporter because "he never admits a mistake," a rationale that didn't sit well with Krauthammer. "That's no excuse," he said, "no excuse. How difficult is it to condemn it and not say, 'it's obvious that that [who sucker-punched a protester] is a patriot.'"