Trump has tapped into his supporters' hunger for order, jingoism and a world painted in black and white 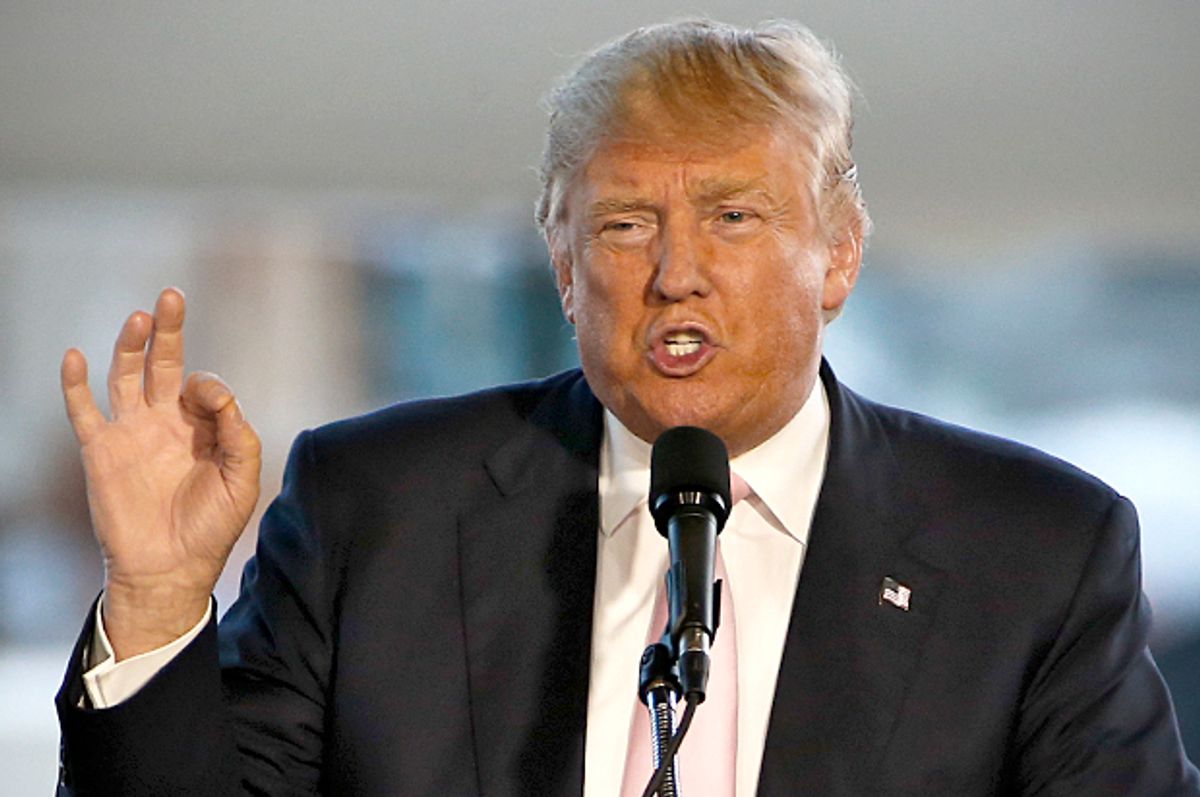 One of the words you hear most often from supporters of Donald Trump is “authentic.” Authenticity implies honesty, or at the very least an absence of bullshit. The good folks at Politico have taken the time to carefully fact-check Mr. Trump, however, and the results are what you’d expect: he's not only dishonest; he’s breathtakingly full of shit.

Politico analyzed nearly five hours of Trump’s speeches and news conferences, roughly a week’s worth of words. The Donald averaged a lie every five minutes. No matter the subject – poll numbers, his record, domestic policy, foreign policy, our trade deficit with China, his personal wealth, or his approach to lawsuits – Trump lied and exaggerated with perfect dexterity, like a man with no compass or shame.

“Certainly, many politicians stretch the truth – the practice of political fact-checking began long before the 2016 election cycle,” the authors write. “But none so much as Trump. These untruths – strung together as they are in all of his speeches – have helped drive one of the most rapid ascents in modern presidential campaign history.” Trump, the authors conclude, has taken Stephen Colbert’s idea of “Truthiness” and “run (for president) with it.”

It’s worth asking why Trump’s bullshit routine plays so well among his supporters? If they’re hungry for something real, something untouched by marketing mercenaries and focus groups, then why surrender to a con artist whose only distinguishing virtue is the crassness with which he lies? It's true that Trump doesn't saturate his speeches with political correctness, but he’s every bit as dishonest as your garden-variety politician.

Political scientists are asking similar questions, and one interesting account of Trump’s appeal has emerged: Authoritarianism.

Matthew MacWilliams, a Ph.D student at the University of Massachusetts Amherst, published a fascinating piece at Vox last month explaining the roots of Trump’s right-wing populism. MacWilliams doesn’t study authoritarian regimes so much as the psychology of individual voters who prefer or respond to authoritarian politics.

Intrigued by Trump’s popularity, MacWilliams surveyed a cross-section of voters, looking for insight into the typical Trump supporter. He writes:

“What I found is a trend that has been widely overlooked. A voter’s gender, education, age, ideology, party identification, income, and race simply had no statistical bearing on whether someone supported Trump. Neither, despite predictions to the contrary, did evangelicalism. Here is what did: authoritarianism, by which I mean Americans’ inclination to authoritarian behavior. When political scientists use the term authoritarianism, we are not talking about dictatorships but about a worldview. People who score high on the authoritarian scale value conformity and order, protect social norms, and are wary of outsiders. And when authoritarians feel threatened, they support aggressive leaders and policies.”

Of all relevant variables, it's primarily authoritarianism – not education or gender or income or race – that predicts support for Trump. MacWilliams defines the authoritarian attitude as one dominated by a desire for order and conformity and by a fear of change, particularly social change:

“Authoritarians are thought to express much deeper fears than the rest of the electorate, to seek the imposition of order where they perceive dangerous change, and to a desire a strong leader who will defeat those fears with force….Authoritarians prioritize social order and hierarchies, which brings a sense of control to a chaotic world. Challenges to that order – diversity, influx of outsiders, breakdown of the old order – are experienced as personally threatening because they risk upending the status quo order they equate with basic security.”

The emphasis on order seems important, and perhaps explains why Trump’s bullshit is so effective. The world is gray and complex and irreducible. One of the reasons an ideology is so powerful is that it puts the world into a conceptual box, reordering it in the ideologue's image. But the world doesn’t fit in a conceptual box, and reality can’t be made coherent without distorting it. The temptation to simplify things is often overwhelming, though, and this is especially true of authoritarians, who “tend to see the world in black-and-white terms.”

The allure of a nationalist strongman or a totalizing ideology is that it reduces the world to us and them, black and white, right and wrong - highly attractive distinctions for authoritarian personalities. Against the backdrop of America’s sweeping economic and demographic changes, it’s easy to see the psychological appeal of Trump’s jingoism.

Trump’s great strength is his purity. He doesn’t have solutions, but he has answers – and they’re astonishingly simple. When Trump speaks, he tells you three things: 1) What’s wrong with the world; 2) Which stupid people (or countries) are responsible for ruining it; and 3) How he’s going to take it back. Consider this gem:

This is a stupid and incoherent statement - not a word of it survives scrutiny. But to an anxious voter, a voter with more fears than facts, it’s awfully reassuring - and it promotes a false but satisfying optimism about the future.

The people at Trump rallies don’t want to hear that America’s economy has been transformed by globalizing forces over which the president has little control; that many of those lost jobs aren’t coming back; that the American dream is mostly illusory, and a product of a bygone era. They don’t want to hear that more bombs and fighter jets won’t solve our terror problem; that their petty hatreds are manufactured and exploited for political gain; that the Mexicans they despise are only here because the captains of industry want them to be.

Instead, Trump voters want to hear what they want to hear, bullshit or not. They want him to say that America is the best damn country on the planet, and that we stopped winning because our leaders are weak and our borders are porous. They want to be told that the country they imagine is only one ballsy president away; that they can have their social security and their health care and their roads and their public education without paying taxes or funding government. These are soothing lies and Trump has reduced all of them to four clarifying words: “Make America great again.”

Trump’s appeal isn’t reducible to a single variable – authoritarianism doesn’t explain everything. For instance, there are plenty of avowed bigots in this country who see in Trump a fellow traveler, and it’s as simple as that. But a man doesn’t get this close to the presidency with bigots alone. He’s clearly tapped into something transcendent and raw. Which is why America's "Authoritarian Spring," as MacWilliams calls it, is likely just beginning.