It's even worse than Fox News: The sick collusion between Donald Trump and our democracy-destroying media

Trump's con is his ability to gin up spectacle. Our TV networks must share that soul-crushing, anti-democratic goal 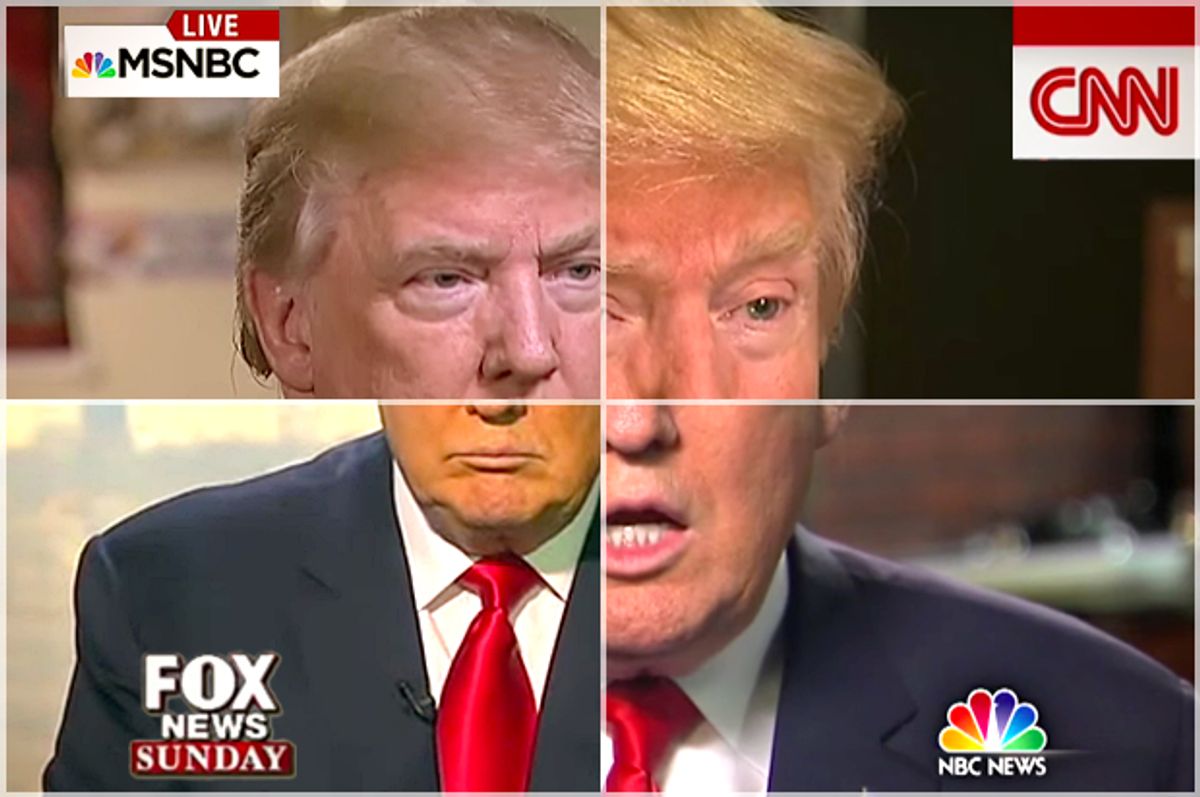 This past Thursday, at a rally in North Carolina, Donald Trump reacted to the forcible ejection of a protester by issuing an odd and ominous complaint. “It’s always like one person,” he observed. “Can’t we have a little more action than this?”

The next night, Trump got his wish. Thousands of protesters crashed his rally in downtown Chicago, seeking to exercise their right to peaceable assembly and free speech. Rather suddenly, Trump the Bully morphed into Trump the Chickenhawk. He abruptly canceled the event, leaving his supporters and protesters to wander the arena and surrounding area.

What ensued was—given the animus between Trump supporters and protesters—a remarkably civil dispersion of more than 10,000 people. There was lots of chanting and a few shoving matches. Four people suffered minor injuries, five were arrested, one of them a reporter.

But if you watched coverage of the event—every major cable network offered hours—what you saw was an endless tape loop of the same four scuffles. This had the effect of making the event look far more violent and chaotic than it actually was, as if America was on the brink of some kind of race war.

For months, Trump has been openly inciting his supporters to carry out violence in his name. His whole con resides in the ability to gin up spectacle.

Friday night was simply the moment in which it became indisputable that the corporate media—and the television networks in particular—share that exact same goal. They have become Trump’s most potent allies, the megaphone through which he bellows his adolescent war cry of self-pity and aggression.

And this began, by the way, long before Trump decided to become America’s alpha Brandidate.

For decades, in fact, the media has been reshaping the “presidential campaign” from a civic undertaking into an entertainment product. Serious discussions of policy and possible remedies have given way to an endless parade of faux scandals, poll numbers and sound bites.

Donald Trump is the logical byproduct of this steady devolution. He is the heir to a kingdom in which stimulation has replaced thought as the guiding impulse. The favored narrative among pundits alarmed by Trump’s rise has been to blame the GOP. There’s no doubt that the party has spent decades stoking racial, cultural and religious anxieties to prop up its essentially corporatist aims. But Trump would not exist as a national political figure—let alone the Republican front-runner for president—without the insatiable media promotion he has enjoyed.

Here’s how Les Moonves, the head of CBS, justified his network’s decision to award Trump so much more coverage than any other candidate, even Bernie Sanders, whose rise has been equally shocking (and whose events are larger than Trump’s):
“It may not be good for America, but it is damn good for CBS … The money’s rolling in and this is fun. I’ve never seen anything like this, and this is going to be a very good year for us. Sorry. It’s a terrible thing to say. But, bring it on, Donald. Keep going.”

I am not making this up. An actual network chief said this. Out loud. To a roomful of people at the Morgan Stanley Technology, Media & Telecom Conference in San Francisco two weeks ago.

It amounts to a doctrine of cynical codependence. Trump knows the media will continue to cover him so long as he continues to generate controversy. So why should he stop? Why not slander Mexicans as rapists and tease handicapped people and POWs and propose a registry for Muslims and, heck, why not promote assault at your events? Where’s the moral boundary? What if it doesn’t exist?

What Trump’s ascent verifies isn’t just his desperation for acclaim—that was pretty much understood from the outset—nor the complex grievances of his followers, but the media’s shameless allegiance to profit. The only thing that worries the networks happens to be the same thing that terrifies Trump: losing market share.

Anyone familiar with the White Supremacy movement, or more broadly with fascism, will recognize this ploy, which reframes aggressive impulses as obligatory self-defense. Modern talk radio is built on the same sophistry.

None of us should be surprised if White Supremacists, or other hate groups, are even now gearing up to attend the next Trump rally, with violent intentions. Or worse, as Trump is now advocating, the next Bernie Sanders rally.

There are those, such as Rachel Maddow, who have suggested that Trump is consciously sowing civic upheaval, because this will goose his electoral appeal as a Strong Man candidate.

I’m not sure Trump has that kind of foresight. My own sense is that he’s more a vessel of American grievance than a Godfather, a guy whose desperate plays for attention keep being gratified.

In thinking about his rise, and its broader moral consequences, I found myself returning to the words of the writer George Saunders, whose essay "The Braindead Megaphone" sought to understand how so many otherwise decent Americans consented to (and even cheered) our invasion of Iraq.

Saunders compared the modern mass media to a guy at a party with a megaphone:

We’ve said Megaphone Guy isn’t the smartest, or most articulate, or most experienced person at the party—but what if the situation is worse than this?

Let’s say he hasn’t carefully considered the things he’s saying. He’s basically just blurting things out. And even with the megaphone, he has to shout a little to be heard, which limits the complexity of what he can say. Because he feels he has to be entertaining, he jumps from topic to topic, favoring the conceptual-general, the anxiety or controversy-provoking … the gossipy … and the trivial.

We consider speech to be the result of thought (we have a thought, then select a sentence with which to express it), but thought also results from speech (as we grope, in words, toward meaning, we discover what we think.) This yammering guy has, by forcibly putting his restricted language into the heads of the guests, affected the quality and coloration of the thoughts going on in there.

He has, in effect, put an intelligence-ceiling on the party.

It’s too easy to say that Donald Trump is the guy at the party with the megaphone. It’s also inaccurate. Because media companies have, day after day, handed him that megaphone.

The more coverage Trump is awarded, the stupider and more dangerous our discourse will become. We won’t have to think about (or hope to solve) climate change or economic inequality or the corruption of our campaign finance system.

If the corporate media continues to place profit above our national salvation, if it continues to hand the megaphone to Trump, it is incumbent on we, the people, to leave the party, to change the channel, to find a new set of voices.