Let's dispense with political correctness and talk straight: Donald Trump is a racist 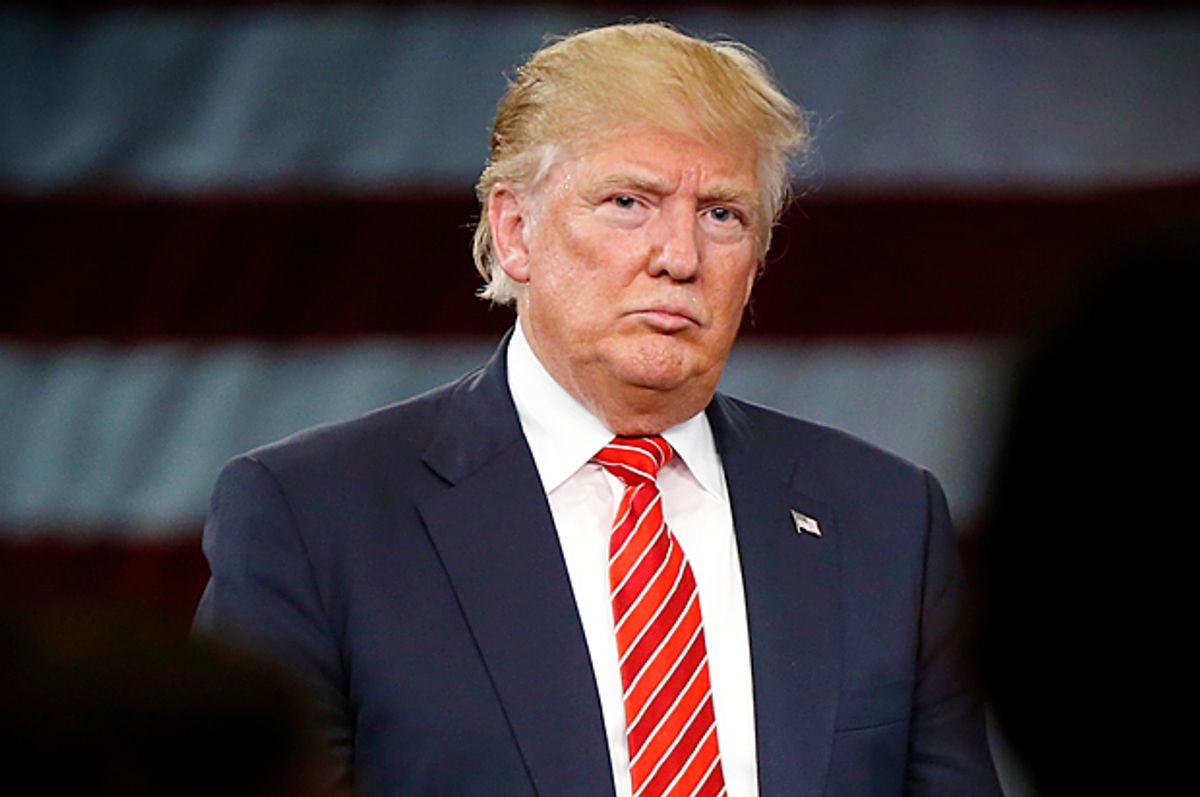 Wednesday night's Democratic primary debate was a case of political correctness run amok. Asked point blank whether Donald Trump is a racist, Hillary Clinton refused to employ the term. She was happy to list his offenses – “calling Mexicans rapists,” “trafficking in prejudice and paranoia” – and even noted that he “couldn't decide whether to disavow the Ku Klux Klan and David Duke.” Yet none of this was enough to earn the label. “I'm not going to engage in the kind of language that he uses,” she said when pressed, drawing a grossly false equivalence between racism and calling racists racist.

Straight-talking Bernie Sanders could have drawn a striking contrast by simply answering “Yes.” But he, too, equivocated, also pointing to evidence of Trump's racism while refusing to call it that outright. “Trump was in the middle of the so-called birther movement,” he reminded us. “Nobody has ever asked me for my birth certificate. Maybe it has something to do with the color of my skin.” Yet when asked by moderators what such behavior “tell[s] you about his character,” Sanders changed the subject, declaring that he beats Trump handily in a national poll.

“As a matter of accuracy,” Ben Mathis-Lilley writes at Slate, “if someone who says Mexican immigrants in America are disproportionately likely to be rapists, argues that Muslims should not be allowed into the United States, and repeats sleazy urban legends about the behavior of American Muslims and black people is not a racist, then the word has no meaning.”

In the Wall Street Journal, Edward N. Luttwak takes the precise opposite stance, noting that Trump is “unlikely to be startled by an encounter with a person of 'Hispanic' or 'Latino' origin” (sarcastic punctuation his own) and “has certainly shared a meal with one or two Jews.” Thus, we “may seriously doubt the sincerity of his anti-Mexican sentiments. He must certainly find ways of undoing the damage—starting with a fulsome apology—but nobody should view Mr. Trump as a racist because of those remarks.”

I'm not sure Donald Trump actually thinks Mexicans are rapists. I'm not sure Donald Trump actually thinks at all. But in order to qualify as a racist he doesn't need to. He just needs to have sufficient disregard for the lived experiences of racial minorities that he is willing to throw them under the bus. To, when need be, jeopardize their physical safety for the purposes of his own self-aggrandizement.

Of course, the crippling hesitation to call a spade a spade is nothing new. In my own experience, and that of my female and minority peers, a dispiritingly common reaction to tales of discrimination is a reminder that we cannot know the offender's behavior was related to race or gender. Often, such friendly reminders are offered by people who cannot know that it wasn't. But such discussions are framed as a thought exercise, with one party implicitly invoking their privilege as authority and suggesting that, because they are supposedly disinterested, they are also unbiased and impartial. Levying the charge of “illogical” is a knee-jerk counter to charges of insensitivity.

But an assumption of tolerance in the absence of conclusive proof is itself a bias, as people often tie themselves up in knots assigning motives unrelated to race or gender. “Maybe the creepy old man who got your number off your resume won't stop texting you because he wants a good pal” and “Perhaps that US Airways agent randomly refuses to print the boarding passes of white passengers, too” don't strike me as especially logical sentiments.

Such sentiments extend beyond personal experience and to worldviews. In a recent piece about Asian-American stereotypes in my old school district, I expressed gratitude for my encounters with accomplished, smart individuals who were both creative and good at math. A former business school classmate sent me a lengthy Facebook message accusing me of “proof by hasty generalization” for suggesting that “since you have seen examples supporting your point, the opposite point shouldn't be right.” Epic mansplain aside, a default presumption of truth to stereotype is perhaps more problematic than a default presumption of righteousness to the privileged.

But these benefits of the doubt extend even further, to not just matters of motive or accuracy, but questions of empathy. The argument becomes not just “maybe the police officer's actions were justified,” but “imagine how terrified the police officer must have been.” In particularly egregious instances, male friends have told female victims of unreported sexual assaults that the experience must have been a deeply confusing and upsetting one for the perpetrator.

The ethical responsibility toward empathy always falls to the person in the position of relative privilege. Empathy has tremendous social utility when applied down. When applied up, the burden of empathy is an incredibly taxing stressor. It reinforces and strengthens disparities in privilege while implicitly dehumanizing the group that lacks it by suggesting their feelings are unworthy of similar protection.

Healthy skepticism is one thing, but given the extent to which social constructs like race and gender permeate our worldviews, it is illogical to assume that people are magically free of their trappings absent explicit evidence to the contrary. It is discriminatory and unethical to, in social settings, constantly place the burden of proof on the victims of racism and sexism, rather than its beneficiaries. It also exhibits a fundamental misunderstanding of the way prejudices operate.

“P.c. police” hysterics have embraced the term to mask their racism and misogyny in concerns about an Orwellian dystopia, wherein we cannot identify the cancers that plague our society for fear of causing offense, and thus remain powerless to root them out. A Washington Post cartoon perfectly cuts to the heart of the matter. “I'm so sick of 'political correctness,'” one person says.

“OK, try it without the 'political correctness,' then,” the other responds.

“I'm so sick of not being able to insult and belittle women and minorities,” he replies.

Couching insulting and belittling views in overarching political statements, such as support for a candidate or his policies, does not make them any less insulting or belittling, and it is unreasonable and unethical to expect women and minorities to react to these statements unemotionally, or to accuse them of “getting personal” when they call out racists or sexists for what they are. In any event, is fitting that the anti-p.c. movement has found the spokesman it deserves in a demagogue as aggressively offensive as he is thin-skinned.

And so because of the embarrassing associations, true progressives have ceded the ground of “political incorrectness.” Yet the unwillingness to accurately label people for fear of offending their ever-delicate sensibilities was on display in prime time on Wednesday night, and the Orwellian threat it poses is very real. It is now time for us to engage in some straight talk of our own. Yes, Donald Trump is a racist, and if you support him, you have sufficient disregard for the lived experiences of racial minorities that you are one, too. Our constant coddling of the privileged via a refusal to identify prejudiced beliefs as such only serves to legitimize them. I'm not interested in protecting people from the social consequences of their hateful words and views, or in granting them the self-satisfaction that stems from their imagined tolerance. We can't treat the disease if we're too cowardly to diagnose it.

One night after the Democrats convened onstage in Florida, the remaining Republican candidates gathered for a debate of their own. “I don't want to be so politically correct. I like to solve problems. We have a serious, serious problem of hate. There is tremendous hate,” Trump responded when questioned about his rampant Islamophobia. “We better solve the problem before it's too late.” I couldn't have said it better myself.