"My company knew the truth, and they're siding with Donald Trump": Ex-Breitbart staffers spill the beans to Megyn Kelly 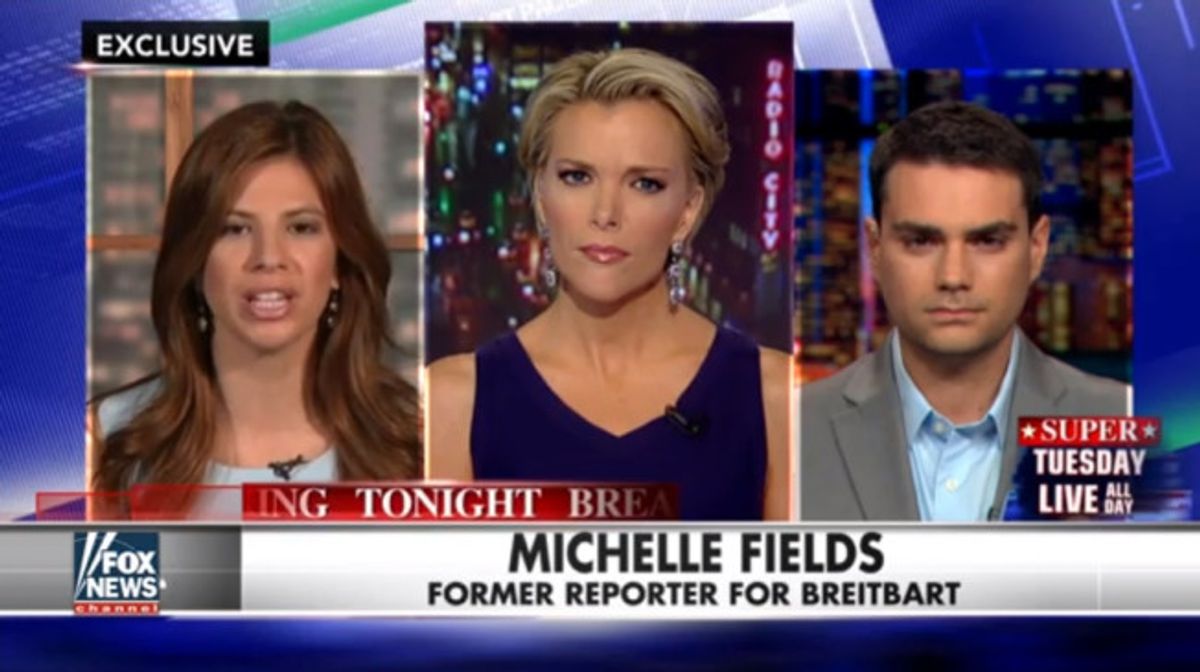 Not quite a full come to Jesus moment, Fields and Shapiro revealed, however, that although they were fully aware of their outlets fondness for Trump, Breitbart's refusal to stand up for employees in the face of bullying from the Trump campaign came as a complete shock.

"They knew the truth from the very beginning," Fields told Kelly on Monday. "My editor, as soon as it happened, had spoken to Corey. He told me that Corey had admitted to it, and I was getting an apology, so I stayed quiet. I wasn't going to make a big deal about it."

Fields explained to Kelly that, "When this happened, my Washington editor Matthew Boyle was telling me, 'Oh don't worry, this is going to be great because Donald Trump’s going to give us so many exclusives now because they're going to feel like they have to do it because of what they did."

The former Breitbart employee expressed dismay that her bosses would chose Trump over her: "This is how my company was looking at this. Instead of saying, 'Wow, what happened, are you okay? Let's defend you,' they were thinking that this was a good thing because we would get more access to Donald Trump."

"I thought, I'm not going to make a huge deal, and that didn't happen. I never got the apology," she told Kelly. "Instead they embarked on this smear campaign against me. So they knew the truth, my company knew the truth, and they're siding with Donald Trump."

Fields told Kelly that she felt pressured to file criminal charges against Lewandowski after she received several accusations of lying about her injuries. "I needed a report to show people that this happened," she said.

"Those bruises will heal. My problem is the smearing of my name, my reputation. I have to fight back."

One time Editor-At-Large Ben Shapiro told Kelly that he reached his breaking point with the outlet after they "decided to go right along with" Lewandowski's denials:

I mean, the fact that Corey Lewandowski was putting out reports from discredited websites, that he was accusing Michelle of being an attention seeker who had done this sort of thing in past in order to gain attention for herself. You know, all that Corey Lewandowski had to do to stop this was apologize, essentially, and say that he didn't mean to do it. That's basically all that would have stopped this. Instead he decided to lie and to smear, and Breitbart decided to go right along with that.

Shapiro even conceded to Kelly that "any objective observer of Trump -- of Breitbart News could see for months that Breitbart had become a very, very strong advocate for Donald Trump."

"And look, that's their prerogative. Any media organization has the ability to set editorial. The problem for me became absolutely clear when they decided to abandon their own reporter and indeed undercut their own reporter," he continued, explaining his resignation.