The right's hypocrisy on Trump protesters: It was only OK when the Tea Party was crashing Obamacare meetings

The Tea Party hijacked Congress via uncivil disobedience; the right can't cry when its tactics are used vs. Trump 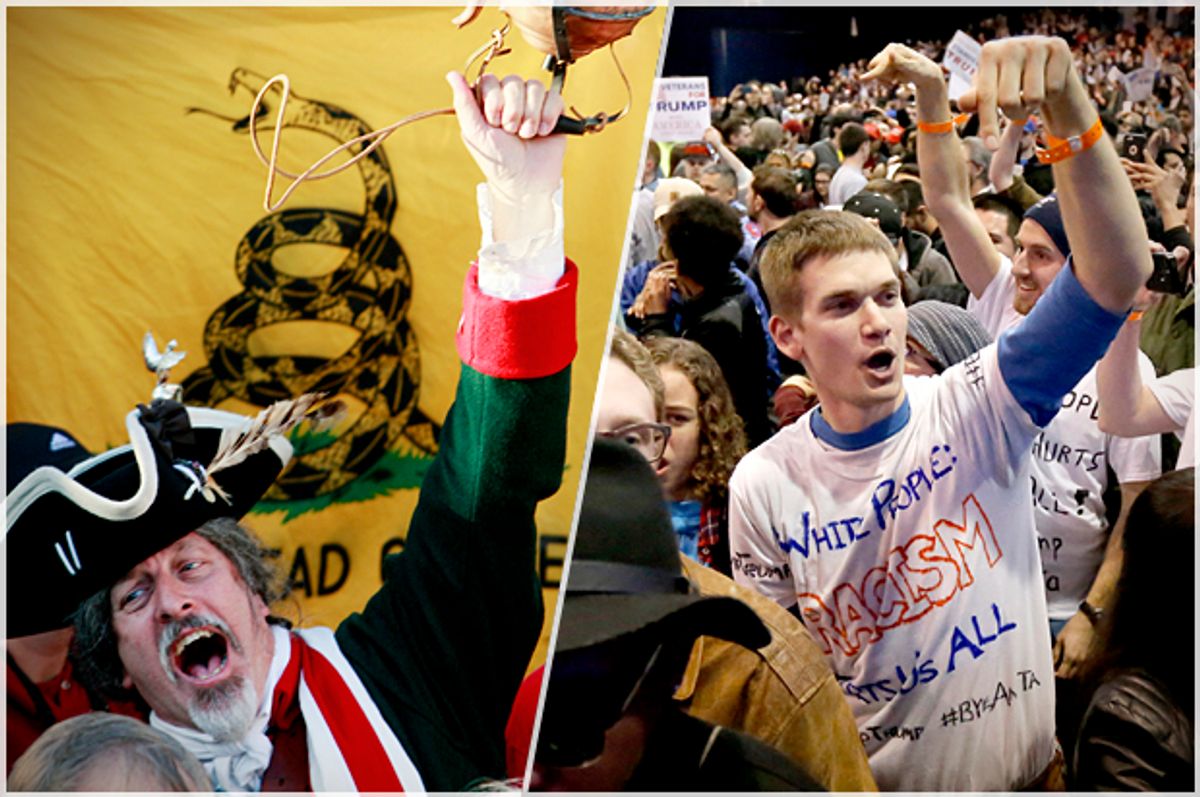 Reaction to protests and violence at Donald Trump’s rallies has been largely partisan. The leftmost end of the political spectrum is championing the protesters' successful silencing of the "Mussolini part 2"; their opposites on the right are arguing that the protesters — "Bernie's pawns" — are denying the candidate his Constitutional right to freedom of speech. Perhaps Trump himself — as the soon-to-be official voice of the Republican party — tweeted it best:

Conservative media are using similar rhetoric to somehow reframe the guy who said of a protester, "I'd like to punch him in the face," into the victim of collective liberal bullying.

"Blaming Donald Trump even in part for the violence that has broken out at his rallies is nonsense," wrote the New York Post editorial board. "This is the same left-wing agitation that has plagued the nation for decades now, a rage that fixes on one target of opportunity after another."

"We live in a free society with a First Amendment," conservative columnist John Phillips told CNN's John Berman. "People should be able to meet peacefully. If you have a problem with it, you have every right to protest. Just do it outside and don't be violent."

During his Fox News show Friday, Sean Hannity called the Chicago protesters "violent agitators" who "hijacked what was to be a peaceful campaign rally."

The list of conservatives pinning blame on protesters for violence at Trump rallies is unreasonably long — especially considering the same conservatives' incongruous response to protests that align with their politics.

During the August 2009 congressional recess, representatives returned to their home states to host town hall meetings detailing the Affordable Care Act. Prompted by an extensive mobilizing effort by conservative lobbying and media groups, right-wing protesters derailed several of these events. In some cases, violence erupted and people wound up in the hospital.

The series of protests is widely considered to mark the dawn of the Tea Party movement. What ensued was a domino effect whereby Democrats lost their majority in the House, and a filibustering obstructionist and a pandering racist can viably compete for the GOP nom this coming July.

On Aug. 11, 2009, in Lebanon, Pennsylvania, the late Sen. Arlen Specter  — who had just switched affiliations to the Democratic Party — was literally forced out of a town hall event "after being shoved and booed by ... audience members." According to an NPR report, Specter told media afterward, "We've just had a demonstration of Democracy."

The New York Times described one of "the most raucous events" in Tampa, Florida, hosted by several Democratic lawmakers: "When the auditorium at the Children’s Board of Hillsborough County reached capacity and organizers had to close the doors, the scene descended into violence."

Amateur video of the event shows Obamacare opponents chanting "You work for us!" before the hall reaches capacity and the doors to the event space are closed, leaving angry would-be protesters in the hallway to yell at anyone they could find.

"Some of the protesters told local reporters they had been urged to come by a local activist group promoted by the conservative radio and television host Glenn Beck," the Times reported. "Others said they had received e-mail messages from the Hillsborough County Republican Party that urged people to speak out against the plan and offered talking points."

Beck's former colleague at Fox News, the aforementioned Sean Hannity, also played a part in organizing the town hall disruptions. According to the Times, Hannity's website offered tips on how to "Become a part of the mob!" and "Attend an ObamaCare Townhall near you!"

Conservative pundits not only excused but actively encourage these protesters in 2009. Six-and-a-half years later, however, when Trump — the bronzed manifestation of the Tea Party's compounding white anger — is finally shut the hell up, the protesters responsible are thuggish First Amendment deniers.

Such is the underlying hypocrisy of a conservative movement that has convoluted the First Amendment argument for their own small-government end — you can't condemn free speech you disagree with. The Tea Party came to power on the backs of angry white men who muscled their way onto Capitol Hill, so it can't whine when its opponents borrow the same tactics to shield the Oval Office from demagoguery.