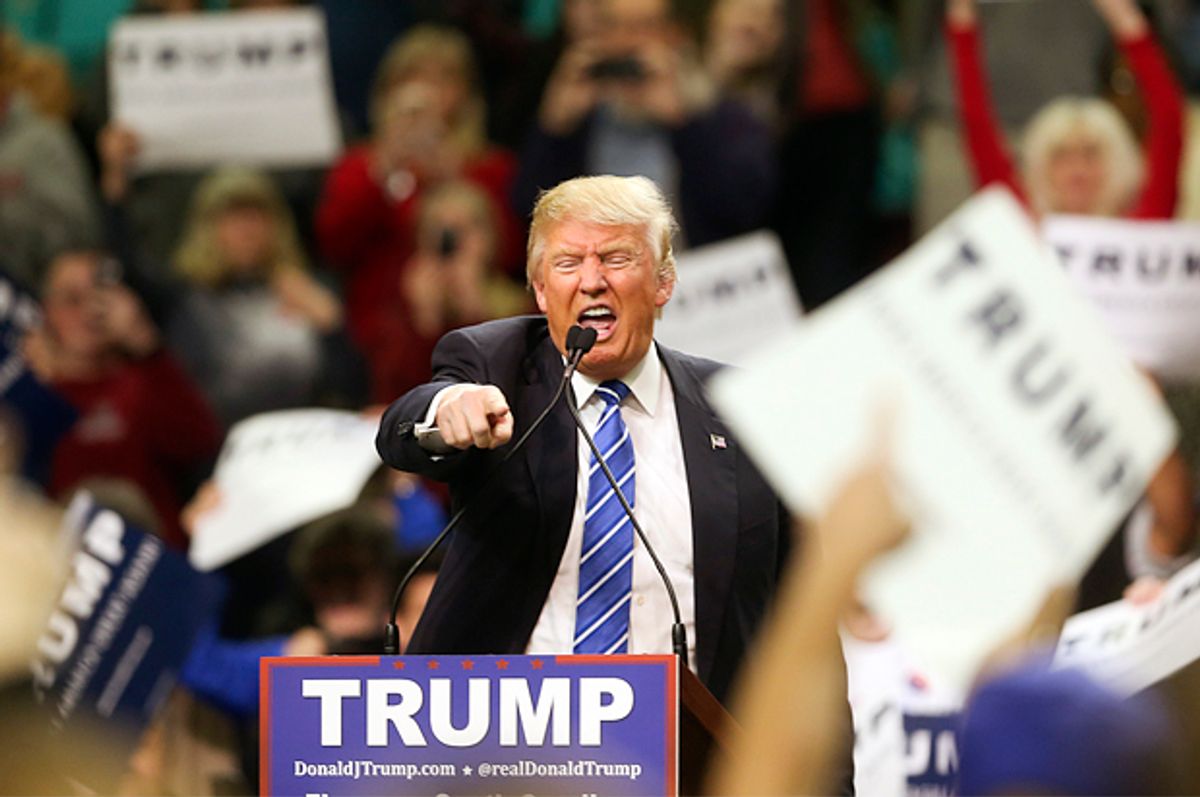 After sticking their toes in and wiggling them around for a bit to test the waters, the Donald Trump campaign has decided to jump into the extremist pool, releasing a statement openly justifying violence against non-violent protesters.

NEW: Trump issues statement about violence at NC rally: "It is the protestors and agitators who are in violation." pic.twitter.com/AH0R0iDraJ

For people who love to accuse their opponents of being "thugs," Trump supporters sure do love to wallow in the logic of actual gangsters, where anything perceived as an insult is seen as justifying violent retaliation.

If you're looking to compare Trump to Barry Goldwater, now's your time, since this press release literally trots out the argument that made Goldwater the candidate of racist reactionaries and gave birth to the libertarian movement: That racism and other bigoted behavior is OK, as long as it's on private property. Just redefine campaign events as "private" parties, and all sorts of terrible behavior is suddenly justified in conservative eyes.

To be fair, it's considered déclassé among Republicans these days to argue that it's OK to refuse service to black people because of private property. Witness what happened to Rand Paul when he regurgitated Goldwater-style arguments arguing that federal government doesn't have the right to ban racist discrimination by private businesses. (Though conservatives are reviving the argument to attack gay people.)

Still, as the proliferation of gated communities and the wildly expanding definition of what counts as "self-defense" makes clear, conservatives still like using extremely flexible definitions of "private property" to justify re-entrenching racist and other authoritarian hierarchies. That's what the Trump campaign is doing here.

A campaign event for a presidential candidate may be a ticketed event, but it's still a public event. Sure, there are a few basic parameters put on them so that people who are causing a disruption can be kicked out, but overall, the tradition is to treat these events as open to the public, instead of some fortress against invaders who need to be beaten back with violence.

Redefining a campaign event for someone trying to be the president of the entire country as a "private" event was all it took, though. Now the conservative press is going to town with arguments casting protesters not as disruptive annoyances but as invading armies that need to be put down with violence.

"Walk into a blue-collar bar and start taunting people that way, and you are likely to leave without some of your teeth," Marc Thiessen, a former Bush speechwriter, wrote in The Washington Post on Monday.

What he failed to mention is that it's against the law for a customer to punch another one in a bar. Yes, even if the bar is "blue collar." Yes, even if you really, really wanted to punch them because you didn't like the mouth on them. Contrary to popular belief, "fighting words" doctrine covers government use of force to control a disruptive person, and is not a blank check to go punching people to shut them up.

This notion that punching someone becomes acceptable because you thought they were uppity and you wanted to put them in their place has long been used to justify racist violence and wife-beating. Do we really want to go back to those days?

(Well, I suppose to people who thought that was when America was "great," I guess the answer is yes.)

Eric Bolling of Fox News, who like most conservatives mistakes half-baked "gotcha" trolling for a legitimate argument, takes this ridiculousness to the next level. "But blaming Donald Trump for violence that occurs at or outside of one of his speeches is like blaming the — you know, the old blame the girl if she's wearing too short of a dress for the rape," Bolling said on Fox News Monday night.

It's a completely incoherent analogy, of course, since it's conservatives trying to justify violence by saying someone was asking for it, and not the other way around. But what Bolling is trying to do here is riff on this notion of "private property," by comparing a protester walking into a Trump event with a man violently invading a woman's body. It's analogy that both suggests that Bolling doesn't think that rape is that big of a deal and that he has a very shoddy understanding of what campaign events are supposed to be about.

A closer analogy, though ideally you should avoid these sexualized analogies altogether, would be to say that it's like a man saying something rude to a woman in a bar. It's a public space, he has a right to talk, and it's only until be becomes disruptive that he is led out. And even then, she still doesn't have a right to punch him in the face. I suspect very strongly that Bolling would be the first to denounce a woman who reacted to words with violence.

Bill O'Reilly hinted at a similarly sexualized metaphor, too, saying protesters are "stalking Donald Trump and his supporters," as if they were showing up at their homes and taking pictures of them. Remember, this is about people going to public rallies, making a point, and leaving. This is not an invasion of anyone's privacy.

The treatment is now extending to journalists, too. Florida Sun Sentinel writer Michael Mayo alleged on MSNBC that he was kicked out of a Trump rally that he got a ticket for and was not disrupting, just because they found out he was a journalist. "They essentially instruct the law enforcement that this is now private property at a private event in which they say who can come and go," he explained.

"Private property" is being so expansively defined by Trump that it trumps the press's right to inform the public about the campaign of someone seeking to be the president, which is, you know, a public office.

There's a lot of gradations in the space between public and private, but campaign events fall into the same general category as bars and lunch counters: Privately controlled spaces, yes, but open to the public and therefore public in a way that your house or, heaven help us, your body is not.

Trump is feeding off a long conservative tradition, that really got going with Goldwater, of defining "private" expansively in order to justify bigotry and even violence. Luckily, most Americans had the common sense to see through that in the 60s and they will have the common sense to see through it now. We can tell the difference between peacefully marching protesters out so the event can continue and violently assaulting them for no purpose other than your own gratification.