Turkey redefines journalists as terrorists, while U.S. claims the ally fights terrorism — which it actually supports 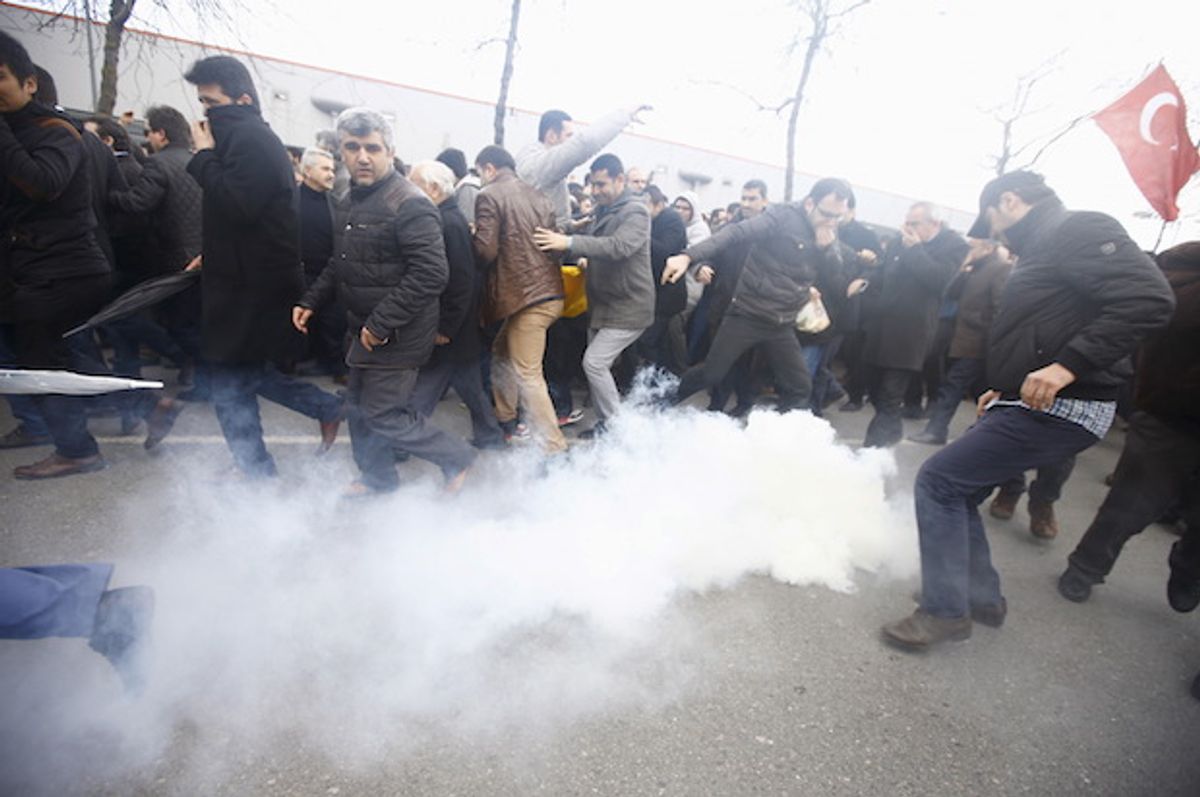 Turkish riot police use tear gas to disperse protesting employees and supporters of the Zaman newspaper, which the government violently seized control of, at its office in Istanbul, on March 5, 2016 (Reuters/Osman Orsal)
--

NATO ally Turkey has violently clamped down on its citizens' basic democratic rights of late. The right-wing government has seized newspapers critical of President Recep Tayyip Erdoğan, including the major daily Zaman, and forced them to publish pro-regime propaganda.

After a March 13 bombing in the Turkish capital Ankara killed 37 people, Erdoğan has taken the repression even further, calling for a new definition of terrorism — one that could effectively criminalize dissent.

The Turkish president declared in a speech on March 14, BBC reports, that there is no difference between "a terrorist holding a gun or a bomb and those who use their position and pen to serve the aims" of terrorists. He openly admitted that this new definition could refer to a journalist, a lawmaker or an activist.

Erdoğan has never treated journalists well. According to the Committee to Protect Journalists, NATO ally Turkey has in recent years imprisoned more journalists than any other country — including longtime U.S. enemies China and Iran. (This didn't stop the aspiring sultan from boasting "Nowhere in the world is the press freer than it is in Turkey. I'm very sure of myself when I say this.")

Yet Erdoğan is now upping the repression to the next level. His Western-allied regime has redefined dissentious journalists and activists as "terrorists."

On the same day Erdoğan made these remarks, the U.S. State Department released a statement stating "We reaffirm our strong partnership with our NATO Ally Turkey in combatting the shared threat of terrorism."

This is fascinating, considering the country's well-documented support for the extremist groups the U.S. is ostensibly fighting in the War on Terror.

"The Turks frankly worked with groups for a period, including al-Nusra, whom we finally designated as we're not willing to work with," Ricciardone said. The U.S. government official considers al-Nusra a terrorist organization. Yet Turkey is not alone; its allies in Saudi Arabia and Qatar have also supported the extremist group.

Moreover, despite the State Department's insistence that Turkey combats terrorism, the U.S. ally has let ISIS and other violent Salafi (Sunni fundamentalist) groups cross its open border with Syria for years.

A former ISIS member told Newsweek that the so-called Islamic State sees Turkey as its ally. He explained that heavily armed ISIS fighters freely cross the NATO member's border, and "ISIS commanders told us to fear nothing at all because there was full cooperation with the Turks."

"ISIS and Turkey cooperate together on the ground on the basis that they have a common enemy to destroy, the Kurds," the former ISIS fighter said.

"I have connected ISIS field captains and commanders from Syria with people in Turkey on innumerable occasions," he added. His ISIS commander "frequently talked on the radio in Turkish," and he "rarely heard them speak in Arabic, and that was only when they talked to their own recruiters, otherwise, they mostly spoke in Turkish because the people they talked to were Turkish officials."

A spokesperson for the Kurdish rebel group the YPG has insisted the same, stating "There is more than enough evidence with us now proving that the Turkish army gives ISIS terrorists weapons, ammunitions and allows them to cross the Turkish official border crossings in order for ISIS terrorists to initiate inhumane attacks against the Kurdish people in Rojava" (Rojava is the northern Kurdish area of Syria).

There are even reasons to believe Turkey has supported ISIS in more direct ways.

David L. Phillips, the director of the Program on Peace-building and Rights at Columbia University's Institute for the Study of Human Rights, wrote a research paper detailing the many links Turkey has with ISIS.

Turkey may have given weapons and military equipment to ISIS and provided transport, intelligence, medical care and training to its militants, according to media reports and documents cited by Phillips, who also served as a former adviser to the United Nations Secretariat and adviser to the U.S. State Department. Turkey has furthermore been accused of supporting ISIS financially through purchase of oil, assisting it in recruitment and helped it fight the Kurdish resistance in Rojava.

In recent months, there have been reports of the Turkish military attacking ISIS. Yet, while it is true that, two years after the creation of ISIS, they are now fighting each other, Turkey has invested significantly more resources in combating the very Kurdish resistance groups that are the most effective fighting forces against the soi-disant Islamic State.

Kurdish fighters in or aligned with the YPG/YPJ are among the few leftist, secular and feminist forces in the region, and have been remarkably effective at liberating territories from ISIS. Turkey, which fears the rise of an independent, autonomous Kurdistan, has done whatever it can to crush the Kurdish resistance movement.

None of this is even to mention the brutal terror campaign the Erdoğan regime has waged for months against Kurdish civilians within Turkey proper. The Turkish government has displaced hundreds of thousands of people and killed hundreds in raids and attacks on Kurdish-majority communities.

Turkey says it is trying to stop Kurdish militant groups, whom it characterizes as the real terrorists. In the meantime, Kurdish civilians are paying the price.

Erdoğan's administration immediately blamed the March 13 Ankara bombing on Kurdish militants, without evidence, and has used it as an excuse to ramp up the violent crackdown. When a peaceful rally of the leftist, pro-Kurdish party the HDP — which Erdoğan's regime has viciously repressed — was bombed in Ankara in October 2015, however, the Turkish government did almost nothing to investigate, yet alone to hold people accountable.

At least 128 people were killed in the October Ankara attack — almost 350 percent more than those who were killed in the March Ankara attack — and hundreds were injured. In October, there were even reports that Turkish police had blocked ambulances from treating the leftist and pro-Kurdish activists who were bombed. The grossly disproportionate response of the Turkish government is telling.

The U.S. State Department may claim Turkey is "combatting terrorism," but this really depends on one's definition of terrorism.

According to President Erdoğan, it is journalists and activists who are the terrorists, not the extremist groups his government is supporting.