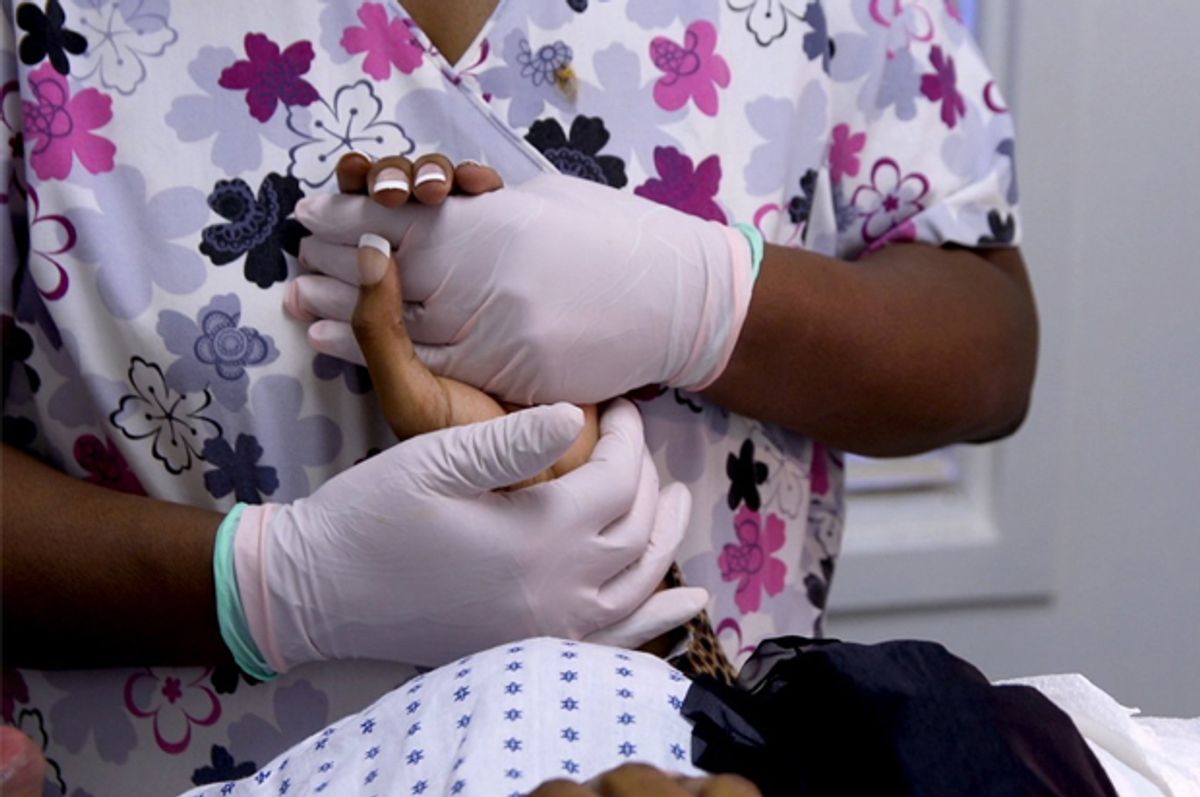 A still from "Trapped" (Trilogy Films)
--

The forces responsible for the rightward drift of American politics claim to champion personal liberty, limited government and deregulation of services and industry. They are brazen in their hypocritical willingness to violate all of these principles to strip women of their constitutional protections and medical rights.

A powerful and essential new documentary, Trapped, from director Dawn Porter exposes how Republicans in state governments have launched a campaign to, in the words of one doctor in the film, “chop away piecemeal at women’s reproductive rights and services.”

Constrained by federal law, anti-choice governors and legislators cannot expressly prohibit abortion, but they can pass and enforce regulations that are sufficiently rigid, harsh and expensive to “make abortion a thing of the past in our state,” as former Texas governor Rick Perry announced.

Regulations include limiting abortions, even when administered in pill form, to surgical centers with costly equipment and employees, requiring doctors who perform abortions to acquire admittance privileges at local hospitals where the Christian conservative culture views them as the enemy, and prohibiting the opening of a clinic within 1,500 feet of a school or church. Legislators also demand that licensed medical professionals lie to their patients, telling women abortion “can increase their chances of getting breast cancer,” even though no scientific evidence supports that claim.

The most famous attack on women’s rights and health happened in Texas with the controversial bill HB2, currently under review in the Supreme Court. Wendy Davis rose to national prominence with her heroic filibuster of the measure, but Perry eventually signed it into law. Prior to its passage, 40 clinics in Texas offered abortion services. Now, there are six. Mississippi has only one clinic, while a handful remain open in Alabama. One study estimates that since the passage of these laws, from 100,000 to 240,000 women in Texas have attempted to induce abortions for themselves, or have sought services from unregulated and unsafe providers.

Filmmaker Dawn Porter takes viewers to the bloodiest battlefield in the American “war on women,” and creates an unsettling and infuriating document of the heartache and hardships the religious right deliberately inflict upon women seeking services that are both legal and safe. Surprisingly, the film is as encouraging as it is disturbing. The doctors, women’s health center operators and nurses Porter profiles in her film display an everyday strength as they struggle to serve women, including rape victims, against the avalanche of assault from clerical bullies and vicious agents of big government.

I recently had the opportunity to speak to Porter over the phone.

David Masciotra: Congratulations on making such a powerful and profound documentary. I expected to find it unsettling, but I was surprised to also find it inspiring. That surprise was the result of the way you chronicled the lives of the service providers, doctors and nurses.

Dawn Porter: Thank you. I’m glad you got that, because I felt it and still feel it. When you see inspiration in stories, it is important to show it. No one wants to feel hopeless, and we don’t need to feel hopeless. We need to feel aware, but sometimes, because we have so much information coming at us, it becomes overwhelming. What the service providers are doing is remarkable and ordinary. They are determined and principled, but they are regular. I think there are more people like that than we see.

DM: The novelist James Lee Burke once said that “the important battles are being fought in places no one has ever heard of.” Our culture has such a grand conception of courage that we often lose the ordinariness of many people’s courage and heroism.

DP: Yes, it's easy to celebrate people who make grand gestures, but I see many people who are quietly courageous and heroic. Seeing those people is watching democracy live. The people in this film don’t give up, and they are very American. They are very entrepreneurial. They are problem-solvers.

DM: What ignited your passion, and what provoked you to make an entire documentary about it?

DP: I was in Jackson, Mississippi, making another film, and I read in their local paper that there was just one clinic left in the entire state. I was floored by it. I just assumed that in this age of Roe v. Wade that there would be many clinics. By comparison, in the New York City area, there are 80. Now, there are six states with just one clinic open. I became interested in how the political process was closing clinics. It isn’t violence or extremism, it is our legitimate political process. I’m a lawyer by training, and a political scientist, but I became fascinated with watching individuals fighting to remain open and keep these services available, as they should be.

DM: I was surprised by how brazen many state officials are at articulating the real agenda of their actions. I was familiar with the phony pretext of “protecting women’s health,” but I was surprised seeing Perry, and others, state explicitly, “We want to end abortion.”

DP: It is chilling, and astounding. They have a total disregard for our laws and Constitution.

DM: Is one of the hopes and purposes of your documentary to encourage people to pay more attention to state politics, and become more involved and invested at that level?

DP: Yes, absolutely. Barack Obama wins in 2008, and in 2010 there is a pretty intense political backlash, and one of their first political acts was to start passing prohibitive regulations on abortion. There have now been more than 250 laws targeting abortion clinics passed. The state level is incredibly important. It really governs our day to day in ways more profound than the president.

Every two years we also elect our congressmen and women. We can have a significant impact on how we are governed by voting. Eighty percent of the American people believe abortion should be available in at least some circumstances, yet we have these laws closing down clinics. Where is the political disconnect there? That’s what the documentary is about.

DM: Do you believe your documentary has relevance to the presidential race, because of the importance of judicial appointments that the president makes?

DP: The presidency is so important not just for the present, but for an entire generation. Supreme Court appointments are for life. The next president will appoint not just one, but possibly three justices. We need someone who is able and qualified to govern. The stakes are high here. The case challenging HB2 is the most significant one on abortion rights in the last two decades.

DM: One of the service providers states in the documentary, “We need to stop shaming women over abortion.” Is that something you wanted to explore in the film?

DP: I had never been in an abortion clinic. I did not know what to expect. I realized once I started filming that I had really internalized the negative messaging about clinics. I thought about that a lot. We do not discuss abortion outside of politics, and in court cases, it is framed in the terms of privacy: something not to be discussed. We’ve created a culture of silence. Yet, 1 in 3 women under the age of 45 have had an abortion. It is an incredibly common experience for women, but so many women feel alone.

I spent time in six different clinics—a lot of time in clinics. I saw over and over, women beating themselves up and feeling ashamed and alone. Much of what the service providers do is try to reverse that. They try to create a safe, warm and welcoming environment, because that is what good medical care is about, and this is medical care. It was striking and sad to me how ashamed many women felt, and how they felt the need to justify their decisions. At first, I wanted to show the range of reasons women have abortions, but then I felt, it is none of my business.

We put too much pressure on women, and it is not helpful to their mental or physical well-being. Many of the reproductive rights organizations are trying to get women to talk more about their experiences, and I think that is helpful. We need to talk about how common it is, and how important it is for women to have a safe place for it.

DM: One of the major sources of shame for women around abortion is religion. I went into the documentary prepared to vilify religious people, and while it certainly has its villains like Judge Roy Moore, I was surprised that the abortion providers are also religious. There is even a scene of some of them praying together before they are confronted by a threatening mob of protesters. What do you make of that conflict and contrast?

DP: I grew up in the northeast where religion is not part of daily life like it is in southern communities. All of the abortion providers and staff go to church, and all of them have their spirituality. I thought it was refreshing to see people unwilling to cede religious belief to extremists. In one of the doctor’s views, God is the source of comfort and compassion, and that’s how he practices his religious beliefs. I’ve had so many people react to this film by thanking me for that alone, for showing that there are many people like that.

DM: You’ve already mentioned some surprises of your experience shooting the film. Is there anything else you learned that you did not know before beginning the process?

DP: It was a hard film to make. The clinic operators and staff are strapped and stressed, because of these laws. The legislation is changing, by design to make compliance more difficult, rapidly and constantly. In terms of what surprised me, I have to say that so many elected officials are being terribly dishonest. Call me naïve, but I found the level of it shocking. I feel like if you are opposed to abortion, that’s your right, but too many officials are deceptive in their tactics, and they are putting misinformation in the hands of women. They say there are breast cancer risks with abortion. They even imply that there are criminal penalties for seeking an abortion.

Much of it is empowered by these regressive religious communities throughout the South, and they create a culture of fear. None of that is healthy for a democratic society. But there are also stronger progressive communities in that same region, more so than many people think.

I hope this film is a good starting point for people to see how important and complex this issue is.

David Masciotra is the author of "Mellencamp: American Troubadour" (University Press of Kentucky). He has also written for Salon, the Atlantic and the Los Angeles Review of Books. For more information visit www.davidmasciotra.com.