Trump bars a Politico reporter from an event, raising questions on how to deal with his anti-press behavior 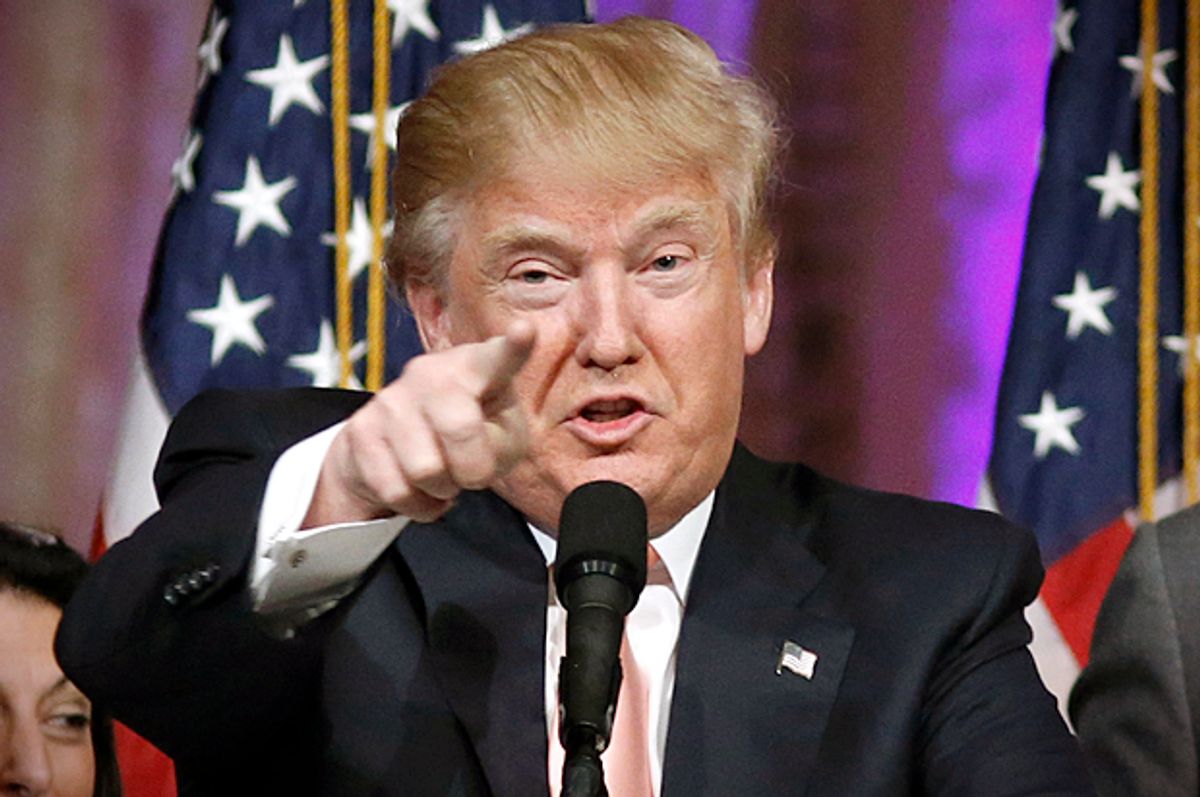 No moment is too triumphant, no victory so exciting that Donald Trump can't take time to nurse a childish grudge. Trump had an outstanding win during Tuesday's primary, pushing Marco Rubio out of the race and making it nearly impossible for any other candidate to touch him, but none of this distracted the campaign from what's really important: Punishing reporters for writing unflattering stories about the campaign.

On Tuesday morning, Schreckinger, who has covered the campaign regularly for more than six months, received an email granting him credentials for Trump's speech and press conference at his Mar-a-Lago club in Florida that evening. But less than 10 minutes later, another email arrived saying those same credentials were denied. Upon arriving at Trump's private club, he was denied entry and escorted off of the property.

What changed? The likeliest explanation is Schreckinger's coverage of an incident at a previous Trump event, where Corey Lewandowski is alleged to have grabbed a female reporter so hard it left bruises on her arm. The reporter, Michelle Fields, worked for Breitbart, a popular right-wing quasi-news site whose fawning coverage of Trump has likely been a major factor in pushing the candidate to the top of the Republican primary. But there's no reason Lewandowski would know that — he denied knowing who Fields was — and likely just saw a young woman daring to ask Trump a question and reacted quickly to shut it down.

The Trump campaign's strategy has been to use the same script used to discredit sexual harassment and rape victims: Using misogynist stereotypes to paint Fields as a hysterical liar, with the "you know how women are" part unspoken but unmistakably lingering in the air.

But Schreckinger, along with Kenneth Vogel and Hadas Gold, dug into Lewandowski's background and found this wasn't the first time that "the intense, Red Bull-chugging operative has been accused of bullying and other inappropriate behavior."

"In interviews with more than 20 sources" who had worked with Lewandowski, they write, "complaints emerged about Lewandowski being rough with reporters and sexually suggestive with female journalists, while profanely berating conservative officials and co-workers he deemed to be challenging his authority."

If Trump and Lewandowski want to dispel rumors that they are thin-skinned bullies, they sure are going about it the wrong way. Yanking Schreckinger's credentials, calling Fields "delusional", dismissing another  reporter who saw the alleged assault on Fields: These are all exactly the behaviors you'd expect from imperious narcissists whose inability to deal with criticism should bar them from the world of politics.

If anything, there's reason to worry that the Trump campaign is simply going to double down on the strategy of intimidating journalists in hopes of sycophantic coverage. After all, the strategy worked like a charm when it came to Breitbart. After initially seeming torn, the website quickly shifted towards choosing snuggle time with Trump over their basic duty to protect reporters. (Their duty to the truth was abandoned before the site was even launched, alas.) Six staff members have left, citing the way that Breitbart undermined Fields until she was compelled to leave as the reason.

Browbeating Breitbart into bootlicking the Trump campaign is just going to encourage the campaign to engage in intimidation even more. Schreckinger's ouster isn't the first time the campaign has tried to control and silence reporters. The Trump campaign, obviously trying to limit reporter access to supporters who have a tendency to reflect poorly on the campaign, has been herding reporters into press pens and monitoring their movements so closely that reporters aren't even allowed to go to the bathroom without an escort.

Photographer Chris Morris alleges that a Secret Service agent choked him rather than let him out of the press pen, an incident captured on video. A CBS reporter who was trying to cover a violent incident at the Chicago rally found himself arrested instead. A Sun Sentinel reporter says he was thrown out of a Dayton event for being on the floor with supporters rather than herded in the press pen. It's clear that Trump believes reporters are there to be stenographers instead of reporters, and scarily, he's getting some law enforcement to back him up on his hostility to the press.

The whole situation creates a major conundrum for the media. It's tempting to argue that the press should retaliate by pulling coverage until Trump shapes up. God knows there's no shortage of Dunning-Kruger-emboldened armchair pundits who have, from the comfort of their social media accounts, scolded the press to stop giving Trump the coverage he craves, using the same logic your parents did when they said ignoring bullies makes them go away. (It doesn't.)

Even Hillary Clinton indulged this argument, saying, "you guys can’t stop covering about him" into a hot mic during downtime in an interview with Chris Matthews. This argument gets bolstered by the fact that Trump gets way more coverage than the other candidates, in terms that can be rightfully described as "exponential".

There's a couple of problems with this argument, starting with the fact that the rise of Trump is a huge news story and it won't be less of one just because the media pretends otherwise. The faith that Trump disappears if you stop thinking about him is pure magical thinking, and the counterargument is that the press has a duty not to treat his increasingly fascist campaign as if it's the same as any other presidential campaign. Trump voters support the man because they like what he has to say, not because they just mindlessly vote for the guy who gets his name in the press a lot. But exposing Trump's ugliness has helped lead to him having the highest unfavorability rating for a presidential candidate ever recorded by Gallup.

Even more troubling is that pulling coverage to try to rein Trump in just feeds his campaign narrative that the press is out to get him. During his Palm Beach event, Trump sneered about the "lies, deceit, viciousness, disgusting reporters", to great applause. Lewandowski was on stage with him, and Trump took the time to praise him, making it very clear that the campaign is fully backing the bully-reporters strategy.

Under the circumstances, there's no doubt that a press boycott would lead to Trump successfully playing the victim of the "mainstream media" to his supporters, crowing about how they won't cover him because they're scared of his truth.

The brutal fact of the matter is there is no good way to win in this situation. After decades of right-wing propaganda painting the media as a bunch of "liberal elite" haters who just want to oppress conservatives, any attacks Trump launches on the media will meet with approval by his followers. The best that the media can do is to continue reporting on Trump's extremism, his anti-press attitudes, and his over-the-top bullying, and let the public — most of whom are not in the thrall of conservative anti-media propaganda — draw their own conclusions.