Dumb jocks: What the hell's in the Gatorade of these sports stars who support Trump? 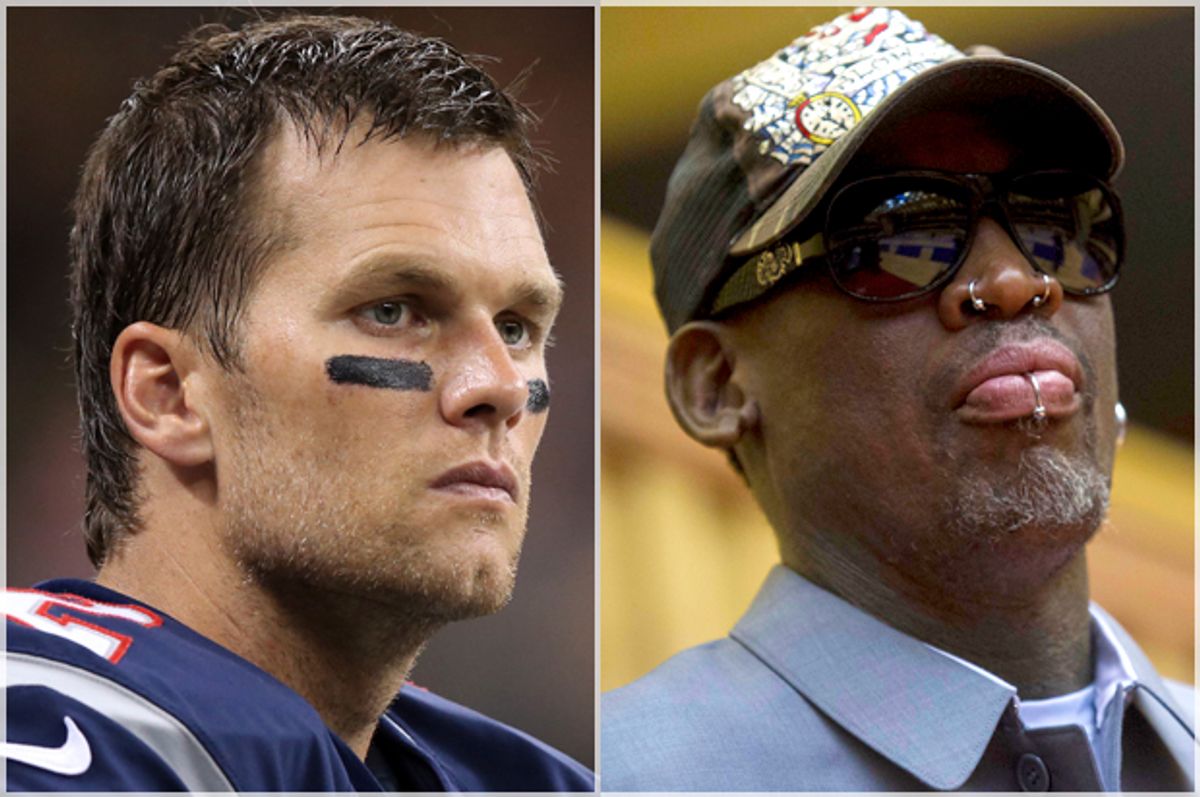 Donald Trump is no stranger to sports. The GOP frontrunner is a dedicated golfer, and his illustrious sports resume includes stints as a boxing and mixed martial arts promoter, USFL team owner (Trump is often blamed for the league's failure), and professional wrestler.

A number of Trump's friends from the sports world are supporting his presidential bid. Here are the athletes that have backed Trump so far:

The former undisputed world heavyweight champion told The Daily Beast that Trump has his support. "I’m voting for him," Tyson said. "If I can get 20,000 people or more to vote for him, I’m gonna do it."

When Tyson was convicted of raping an 18-year-old in 1992, Trump proposed that instead of serving jail time, Tyson could donate proceeds from his next match to rape victims. Trump stood to profit handsomely from the fight if it was held at one of his casinos.

"If I were to vote tomorrow, I'd probably vote for Trump," the legendary football player and coach said in a March 2016 radio interview. Ditka considered a U.S. Senate bid in 2004 that would have pitted him against "the worst president we've ever had," Barack Obama. "Biggest mistake I've ever made," Ditka said later of his decision not to run, "Not that I would have won, but I probably would have and he wouldn't be in the White House."

The golfer took to Twitter on Super Tuesday to endorse Trump. It's possible that he's another member of the bad hair solidarity movement.

The New York Jets center introduced Trump at a campaign event in Dayton, Ohio on Saturday. Things might be awkward at the office when Mangold gets back to work--his boss, Jets owner Woody Johnson, served as the Jeb Bush campaign's finance chairman and was mocked by Trump after the Jets missed the playoffs last season.

Walker was an early supporter, calling Trump his "frontrunner" in August. "We have to do what's right to save America ... I guarantee you [Donald] would do better than a lot of people in office now," the Heisman Trophy winner and former NFL star told TMZ. Walker played for Trump's New Jersey Generals in the now-defunct USFL before getting fired by Trump as a contestant on "Celebrity Apprentice."

Dana White isn't an athlete, but he is a fan of Trump. "Donald will get my vote," the UFC president told TMZ. "You will never hear me say a negative thing about Donald Trump." Trump was an early supporter of the UFC and hosted events at his Atlantic City casinos.

The New England Patriots quarterback and proud owner of a "MAKE AMERICA GREAT AGAIN" baseball cap told reporters in September that he hopes Trump wins. "That would be great," he said. Brady later walked back his comments, calling Trump a "fun guy," but downplaying his interest in the election. "It's way off my radar," Brady said.

The former NFL wide receiver told TMZ that he supports Trump for president because "he’s a guy who won’t put up with B.S. and has what it takes to change how government is run." Owens got to know Trump as a "Celebrity Apprentice" competitor

Add another "Celebrity Apprentice" contestant to the list. The former Red Sox and Yankees star told the New York Daily News that he endorses Trump. “Everyone is calling him a racist," Damon said. "He just wants people to come into this country legally and fill out the proper paperwork. That’s how I’m viewing it."

"I want to be Trump's running mate," the pro wrestler said in September 2015. But Hogan might be too busy for the campaign trail--he is currently embroiled in a bitter legal dispute with Gawker over a leaked sex tape. Hogan was fired by the WWE in July 2015 after audio surfaced of Hogan making racist comments.

The Red Sox pitcher called Trump "a good-hearted person" and said he supported the GOP frontrunner. Trump introduced Buchholz to his future wife at a mixed martial arts fight in 2008, and the couple later married at Trump National Golf Club.

"I love you," Trump shouted when the former Yankees outfielder gave Trump an impromptu endorsement at a Florida press conference.

If you had to guess one athlete who would support Donald Trump, you could do worse than the former Atlanta Braves closer who once told Sports Illustrated, "I'm not a very big fan of foreigners." Sure enough, in January Rocker told the Daily Caller that he endorses Trump. “I think he has really woken America up,” he said.

Days before the Ohio primary, Trump posted a photo of a baseball signed by the all-time hits leader, which appeared to show his support for the GOP frontrunner. The hometown favorite and Cincinnati Reds legend is banned from baseball for life for betting on games.

However on Tuesday morning The Washington Post reported that Ray Genco, Rose's attorney said his client had not endorsed any political candidate or sent the ball.

Rose normally gets $99 a pop for those things so it would be surprising that he would one away for free.