Feel the Bern, indeed: Sanders takes the low road with nasty Clinton tweet, undermining the promise of his campaign

The Bernie Sanders camp took the gloves off last night, in what has otherwise been a civil campaign 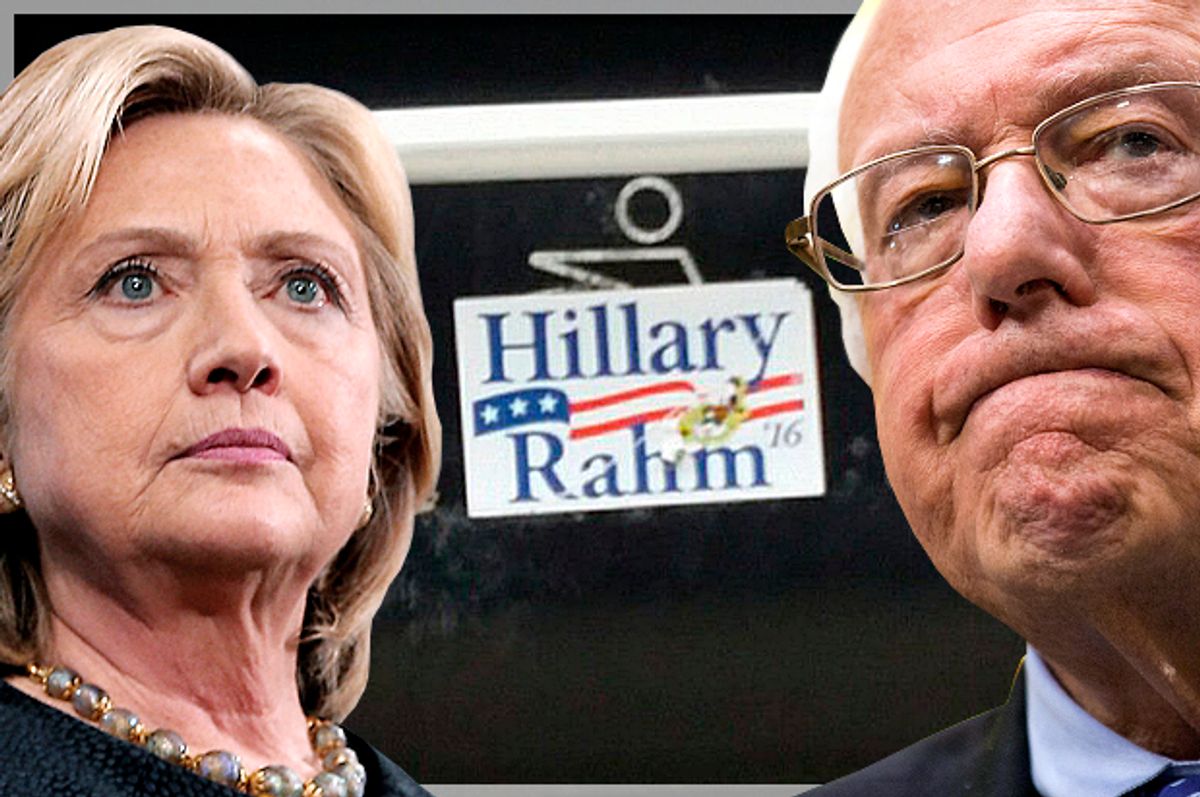 Last night, as polls were closing during the Illinois primary, the official Senator Bernie Sanders for president Twitter account tweeted a blurry photo that constituted a direct, if fair, attack at Secretary Hillary Clinton. The tweet just reads, “Seen in Chicago.” The photo is of a fake campaign bumper sticker for a nonexistent campaign between Clinton and Chicago mayor Rahm Emanuel, who was previously a close adviser to President Bill Clinton and the 23rd White House chief of staff under President Barack Obama. It’s quite a dig: Emanuel, as Chicago mayor, has not just been incredibly disliked but appears to have also worked to cover up the police shooting of unarmed black teenager Laquan McDonald. The footage leaked, as footage always does, showing police shoot the 17-year-old 16 times as he slowly turned around and tried to retreat.

Emanuel’s unpopularity—just a 27 percent approval rating, according to the Chicago Tribune—made both Sanders and Clinton turn their Chicago campaigning into Emanuel feinting. Clinton distanced herself from Emanuel after the McDonald footage surfaced, in such a pointed way that it looked like a snub: She didn’t see him at all on her latest campaign visit to Chicago, strategically keeping her connections with him, whatever they are, as opaque as possible. Sanders, by contrast, tried to make the primary a referendum on Chicago’s mayor, proudly announcing that Emanuel had not endorsed him.

Hence that tweet, with that particular sticker in the photo, tying together Clinton and Emanuel in the most politically intimate way possible. Sanders’ rhetoric has “increasingly sharpened” in the last few weeks, as he’s gotten personal and negative while campaigning in Chicago in a way that he had specifically pledged not to just weeks prior. The tweet stands out in a way little else on his campaign feed does. There are only two other previous Rahm Emanuel attacks on his Twitter account, and they are about teachers, banks, and that oft-repeated non-endorsement line. It’s a gloves-come-off moment; a streak of nastiness in what has otherwise been an impeccably civil campaign, barring a few missteps. Even the way that photo got tweeted is a bit unsavory: The photo was taken by Chicago Tribune writer Alison Bowen, who tweeted that she was not consulted or credited when the Sanders campaign decided to claim it.

And it is the clearest self-indictment of the Sanders campaign, one that is in major trouble today after a four-state loss against Hillary Clinton, who also won a slim majority of votes in Missouri even as Sanders took more delegates. Last week, an unexpected win in Michigan proved that Bernie Sanders still had momentum. This week, it’s much harder to make that case. Sanders had the best possible shot in Chicago, a city full of young people, progressive ideals, and Democratic organizing; it is no coincidence that Donald Trump’s now-infamous shuttered rally was shut down there, courtesy of the city’s organized progressive grassroots resistance. Those protestors claimed allegiance to Sanders.

As it happens, whatever appeal Sanders had in Chicago wasn’t enough appeal. But in the final hours of plausible Illinois victory, it appears that the Sanders campaign was willing to stick it to Hillary’s campaign however they could, with whatever last-ditch desperate measures they could find. In doing so, it compromised on its beliefs for the sake of practical gains—which is literally the entire thrust of its argument against Hillary Clinton, the summation of Sanders’ repeated calls for a political revolution. And his supporters’, too: Where Sanders’ name, at a Clinton rally, will get polite, forbearing applause, Clinton’s at a Sanders rally gets jeers and boos. Clinton is paving the way for eventual reconciliation with a political partner. Sanders is sowing a resentment that could have devastating general electorate consequences.

I’ve no issue with Sanders’ ideology, or even with his campaign's tactics. I do realize that this is just a tweet. Getting things done, in politics, is usually a dirty game; the presidency is not a position of outside agitation, it is the center of the establishment.  It appears that Sanders has finally begun to embrace that.