Earlier this week, the Democratic frontrunner fumbled a question about capital punishment. There's a reason why 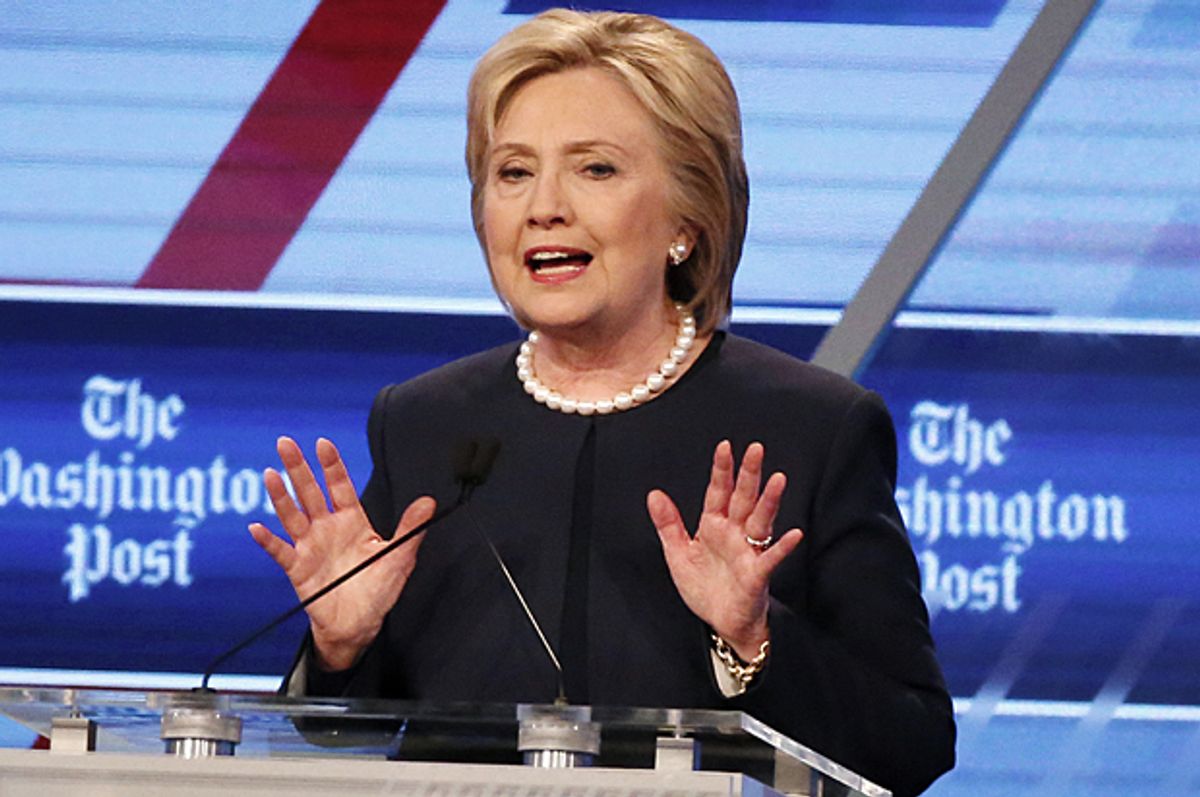 At the Democratic town hall on Sunday night, a man named Ricky Jackson, who spent ages 18 through 58 on death row for a crime he didn’t commit, rose to ask former Secretary of State Hillary Clinton a question about the death penalty. Clinton, whose opinion on the death penalty has changed over the years, had a real chance to come out unequivocally against the death penalty.

Instead, she floundered. After trying to explain to a formerly condemned man the distinction between the federal crimes she’d like to use the death penalty for and why those situations aren’t at all like Jackson’s, she ended with this word salad:

But what happened to you was a travesty, and I just can't even imagine what you went through and how terrible those days and nights must have been for all of those years. And I know that all of us are so regretful that you or any person has to go through what you did. And I hope that now that you are standing here before us that you will have whatever path in life you choose going forward and that you will get the support you deserve to have.

It’s not hard to see why Sec. Clinton bobbled the question so badly. After all, it’s not often that presidential candidates are forced to tackle the consequences of one of their policy positions head-on. But more clearly, she flunked the question because her position is completely indefensible.

The death penalty seems to be one of the only rungs of her criminal justice platform that she’s not open to re-examining. In the 1990s, the then-First Lady lobbied for President Clinton's crime bill, a law that Senator Bernie Sanders also supported. Tough-on-crime policies were as common for Democrats as they were for Republicans of the era; during the 1992 election, Bill Clinton famously flew back to Arkansas to oversee the execution of a mentally ill man named Ricky Ray Rector, in order to make a political point that he was “tougher on crime” than the Democrats’ previous presidential nominee, Michael Dukakis. Needless to say, these criminal justice policies were just one area where “bipartisan agreement” turned out to be an utter disaster.

Today, Sec. Clinton campaigns on the promise to undo all of the negative impacts of the prison system that were exacerbated by the crime bill and other '90s-era “bipartisan” policies, ending mass incarceration, committing resources to helping inmates re-enter society, ending racial profiling and “encouraging” the use of body cameras for police. The death penalty, however, is for some reason a bridge too far, even though it’s disproportionately used against people of color, something that Clinton has failed to mention in her frequent references to white privilege.

It’s hard to see what Clinton has to lose politically from taking this stance. This isn’t just a fringe position anymore: Nineteen states and D.C. have abolished the death penalty, the most recent of them being Nebraska, where the mostly conservative unicameral Legislature (which is officially nonpartisan) overrode the governor’s veto.

There are several reasons why why states are starting to dump the death penalty. One is that it's becoming more widely accepted that the state shouldn’t execute its own citizens. And the states that do have the death penalty tend to be horrifically bad at administering it.

In an Atlantic cover story last year, Jeffrey Stern recounted the execution of Arizona prisoner Clayton Lockett, a man who told his stepmother he didn’t want her to be present for the execution “because I don’t think it’s going to be very good.” Lockett’s prediction turned out to be accurate: He went into seizure and his groin practically exploded; the procedure was actually stopped because the doctor couldn’t find another vein and there were no more drugs available to administer. It would take ten more agonizing minutes after the doctors stopped pumping drugs into his body for Lockett to die.

Clinton's questioner, Ricky Jackson, could have faced a similar fate. Ohio, like Arizona, has had a problem with obtaining lethal injection drugs because their European manufacturers refuse to sell to American states who intend to use them for capital punishment. Jackson, it's worth repeating, was eventually exonerated. But even Lockett, who admitted the crime he was accused of, did not deserve the death that an American state subjected him to. Even the parents of 8-year old Boston bombing victim Martin Richard agreed that Dzhokar Tsarnaev didn’t deserve the death penalty.

Assuming Clinton doesn’t change her position and then wins the White House, it is possible that Tsarnaev will be executed sometime during her presidency.

The United States killed 28 of its citizens in 2015, many of them in Texas, Missouri, and Georgia. 33 of the 50 states, plus the federal government and the American military, haven’t carried out an execution in this decade.

One of those states that has carried out an execution in the last six years is Delaware. Delaware is a diehard blue state, one whose entire Congressional delegation, governor, lieutenant governor, attorney general, insurance commissioner, and the majorities of both houses of the legislature are Democratic, and have been for some time now. The last three governors have been a Democrat for a total of 23 years, and it’s widely expected that Congressman John Carney will continue that trend.

Within the past four years, Delaware legislators have tried to repeal the death penalty twice, once in 2013 and again this past year. Twice, it’s passed the Senate and then failed in the House of Representatives, where the speaker, Democrat Pete Schwartzkopf, is a retired state trooper. The first time, it stalled in committee; the second time, the state’s governor signed onto the effort, but it was voted down in the full House, 23-16.

It’s impossible to tell what the support of both of the Democratic candidates for president (Sanders is pro-abolition, and has said that the state “shouldn’t be in the business of killing people”) would have done to move the effort along in Delaware. It sure as hell wouldn’t have hurt, considering many of Delaware’s Democrats have already endorsed Secretary Clinton for the nomination.

But in an issue like the death penalty, it’s as simple as being willing to lead, and bringing the rest of the party — and eventually, the nation — with you. Clinton may have looked terrible in her answer to Jackson, but her decision to continue supporting the use of the death penalty, no matter how minimal, may have ramifications for people in his situation for years to come.