Trump or Cruz is likely to go down in flames, taking GOP senators with him. So do they take the best deal possible? 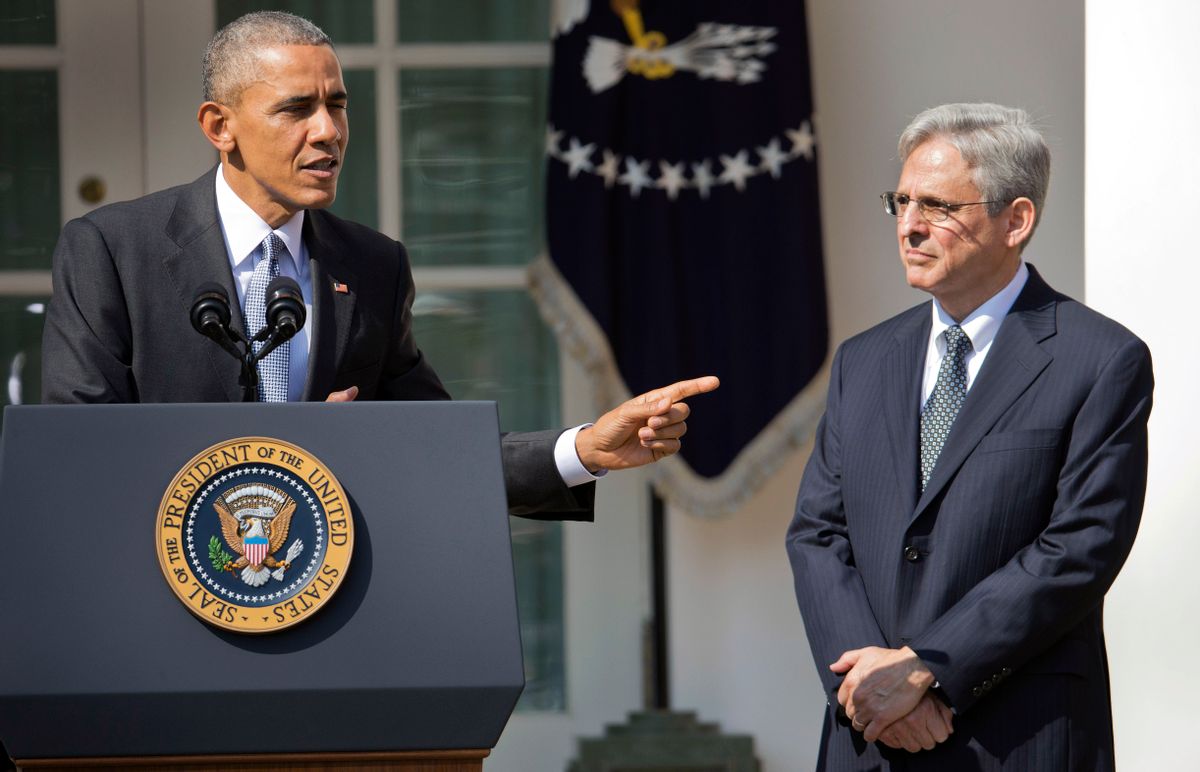 Federal appeals court judge Merrick Garland, stands with President Barack Obama as he is introduced as Obama's nominee for the Supreme Court. (AP)
--

In "The Godfather II," the Corleone family lawyer Tom Hagen describes to his brother Michael how they’ve been tactically outmaneuvered by the old gangster, Hyman Roth. “Roth . . . well he -- he played this one beautifully,” says Hagen, with more than a little grudging admiration.

Assuming they’re not throwing themselves out some of the higher windows in the Senate office building, a lot of Republican senators must be having similar thoughts about Barack Obama.

Obama’s decision to nominate Merrick Garland to the Supreme Court is what in technical legal terms is known as a gangster move. It puts Senate Republicans in a basically impossible position – as if the 24 GOP senators up for re-election this November didn’t already have enough problems, what with the ticket almost certain to be headed by a full-fledged disaster of a presidential candidate. (It’s actually hard to say whether Donald Trump or Ted Cruz is less electable, but either of them is basically a worst-case scenario for down ticket GOP candidates.)

Consider: Just a half-dozen years ago, Orrin Hatch, perhaps the single most influential Republican senator in regard to judicial nominations, declared that Merrick would be “a consensus nominee,” and that furthermore there was “no question” that he could be confirmed.

Under normal circumstances, the choice of a thoroughgoing judicial moderate such as Merrick would be considered by Republicans a best-case nomination by a Democratic president – hence, Hatch’s eagerness to see him picked for the open seat that went eventually to Elena Kagan.

But these aren’t, to put it mildly, normal circumstances. Republican senators have agreed almost unanimously that they won’t consider anyone nominated by Obama this year, on the basis of the constitutional principle (like a lot of GOP constitutional principles, this one isn’t actually in the Constitution, and indeed has heretofore never been enforced, or even articulated) that a president shouldn’t try to fill a Supreme Court vacancy in a presidential election year.

Obama’s nomination puts these senators in a terrible bind. If they carry through with their we-just-made-it-up-on-the-spot principle, and refuse to even give an indisputably moderate nominee such as Garland a hearing, they will look like petty obstructionists to swing voters in their home states (engaging in petty obstruction tends to be the kind of thing that makes you look like a petty obstructionist).

On the other hand, if they relent and hold hearings, the pressure to actually confirm Garland will build, since the only argument against confirming him will be, essentially, that he’s not Antonin Scalia reincarnated.

Confirming Garland before next year, however, is almost out of the question. Such an act would throw the GOP base, already in the throes of the belief that they have been “betrayed” by RINO squishes, into a rabid frenzy that would make the average Trump rally look like graduate school seminar.

So Garland almost certainly won’t get a vote, or at least not until next year. But that decision in turn has a non-trivial chance of playing a role in flipping the Senate back to the Democrats. Indeed, the only scenario in which a vote on Scalia’s now-vacant seat is likely to happen this year is this one: October rolls around, and it has become all too clear to Senate Republicans that Donald Trump or Ted Cruz is going down in flames, and that he will be taking a whole bunch of GOP senators with him. Only then, perhaps, may they decide that Obama has made them an offer they can’t refuse.

By then, however, they may well find that today’s offer has been withdrawn. In any case, no matter what happens, Obama will expect them not to take it personally. After all, it’s just business.