Salon speaks to Olivia Laing, author of "The Lonely City," a lyrical book that broods on Warhol, Hopper and AIDS 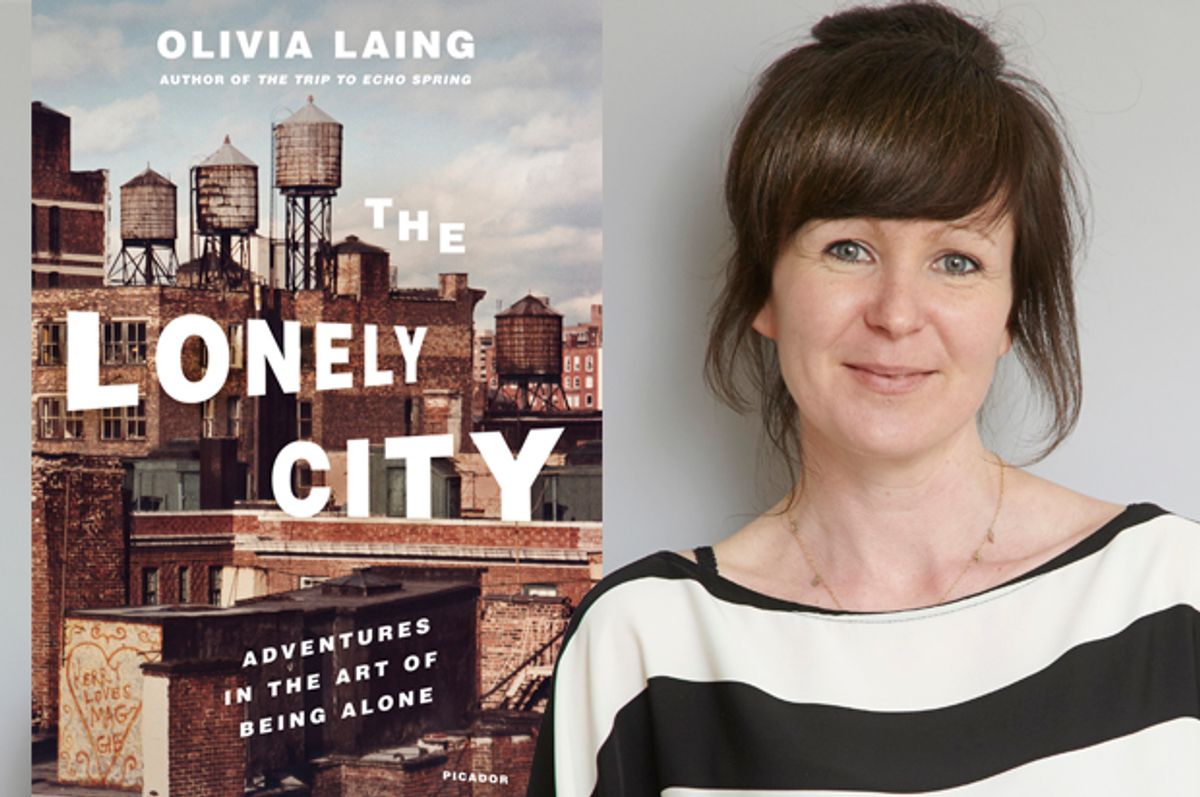 The prose in Olivia Laing’s “The Lonely City” is so fine it could makes anyone who is not the author’s friend or relative almost glad she suffered so much if it led to a book like this. “The Lonely City” is part memoir, part meditation on personal isolation, part critical study of a handful of visual artists. By looking at the lives and works of Andy Warhol, Edward Hopper, Henry Darger, David Wojnarowicz and others, she gets deep into both the sources of creativity and the nature of the human psyche. (The book also ventures into other bits of culture including Hitchcock’s “Rear Window” and the Billie Holiday song “Strange Fruit.”)

Subtitled "Adventures in the Art of Being Alone," “The Lonely City” begins with the paradox that a huge city teeming with people can be, at least for some, a deeply lonely place. As Dwight Garner writes in the New York Times, Laing “picks up the topic of painful urban isolation and sets it down in many smart and oddly consoling places. She makes the topic her own.”

Laing is also the author of a well-regarded book about authors and alcoholism, “The Trip to Echo Spring.” Her first book, the award-winning “To the River,” follows her walk along the body of water -- running through Sussex, England – in which Virginia Woolf drowned herself.

An Englishwoman now living in Cambridge, Laing spoke to Salon from a stop in New York City. The interview has been lightly edited for clarity.

This book uses various visual artists as lenses to look at loneliness. Why did artists make sense for this rather than filmmakers or musicians or novelists?

I didn’t want to write about writers because my previous book, “The Trip to Echo Spring,” was about writers, and I felt I wanted to escape from that. I think, as well, the experience of loneliness, particularly urban loneliness, is intensely visual. I was living in New York, having that classic experience – which I’m having right now – of looking out a window and being surrounded by other windows looking back. That correlated so strongly with the experience of loneliness – that one feels at once entrapped, unable to reach out, but at the same time, exposed to other people’s gazes.

That visual trap is where I started out, and that led me to Edward Hopper’s paintings. It just seemed like visual art was a really powerful way for me to come at loneliness from several different angles.

If you had written about novelists or songwriters in terms of loneliness, who might it have made sense to include?

You mention Hopper. Your book focuses on “Nighthawks” – probably the most ubiquitous of his paintings. I was surprised you found more to say about it. Were you surprised yourself that there were new insights to be had?

Yes – it’s the same thing with Warhol. Some of the people I talked about are so incredibly well-known, but they hadn’t been looked at from this angle. The perspective I was coming at was quite fresh, and that often illuminates new material, because you’re coming from a wholly new perspective.

Back to Warhol. This is another surprise. He was a very public figure, he seemed to have a posse around him – the Factory itself was a bunch of friends and colleagues who worked together. But he was a deeply lonely person, as well, wasn’t he?

I think sometimes he was – yeah. It wasn’t important to me that the people I put in the book were always lonely. Some of them were very socially connected – David Wojnarovich as well. I felt like Warhol’s work and life thought about issues of isolation deeply and well. And that was something that hadn’t particularly been explored, because we tend to take him at face value as this very socially fluent figure.

But actually, the way he used technology in particular – the tape recorder, the cameras – was a way to broker and buffer his social interactions because of his anxiety, his desires for connection, his fear of rejection… These lonely issues were quite close in his life.

I was giving a talk last night, and there was a Warhol expert in the audience. She was saying that she agreed, that I was right, and that it was interesting to hear of Warhol being talked about as lonely, because it gets said so rarely.

But there were moments in his diaries where he does, quite frankly, admit that he never quite got the closeness in his life that he would have wished – that he never got as close to people as he wanted to.

There’s a fair bit about the AIDS crisis in the book. How does that fit in, besides the fact that it related to several of the artists you discuss? Can disease amplify loneliness and isolation, or vice versa?

We think of loneliness as afflicting the individual, but actually it affects groups of people because of social and political forces. I wanted to try and make sense of that, so I did it via the AIDS crisis.

I could have done that with other things; what I said about AIDS is true of the refugee crisis. A group of people get dehumanized, stigmatized, and that group of people becomes intensely lonely. So that was something – a larger thing – I wanted to think through. Especially in relation to the AIDS crisis in late ‘80s and early ‘90s New York. But it’s a much larger issue.

The book is about these visual artists, but also your own experience. Did working on the book make you feel more isolated, or did it make you feel connected to a tradition or a lineage or a way of looking at the world?

Yeah – it did absolutely. It was important that I not end the book with, “Hey, I solved my loneliness by making something!” That didn’t happen… But the book does have an arc of finding a kind of beauty, a kind of interest in loneliness through the works I was examining. The frank declarations of human vulnerability was so moving to me.

What I was trying to do was strip away some of the shame around loneliness, which I think is actually the most personal element.

And did you say “lineage”?

That really resonates for me. I did feel like these were people I related to very deeply. David Wojnarovich was interviewed by Nan Goldin for Interview magazine, and she said, “What do you want from your work, David?” And he said, “What I most want is to alleviate the alienation of other people. That’s the thing that’s most important to me.” His work did that for me, and that is the beauty of art around loneliness – it does have this effect of building empathy, relieving shame, building community. It’s powerful.

What’s next for you? What kinds of topics are you thinking about these days?

I’m thinking about the body, particularly as a political force. We’re at a really interesting moment – on one hand, we’re in a technological, kind of disembodied age, and yet there’s so much protest going on. The Black Lives Matter movement, the Arab Spring… People resisting and changing the world by the force of their bodies on the streets. I’m really interested in thinking about that… But it’s very early stages.

I was trying to place something this book reminded me of. Do you have models as a writer, or writers who inspired you in the early stages?

Sure. I feel like I’m kind of doing my own thing, quite strongly, because I do write these hybrid books that people have trouble trying to work out and categorize… But right from the beginning, people like Bruce Chatwin and W.G. Sebald, the freedom that they created in their work... And people like Maggie Nelson – being able to write beautifully, be a critic, and to be political… Those are things that matter to me and I know matter to Maggie as well. Those are the sort of allyships I feel.