Finally, an LGBT contingent in New York's St. Patrick's Day parade -- but that's not the only reason to celebrate 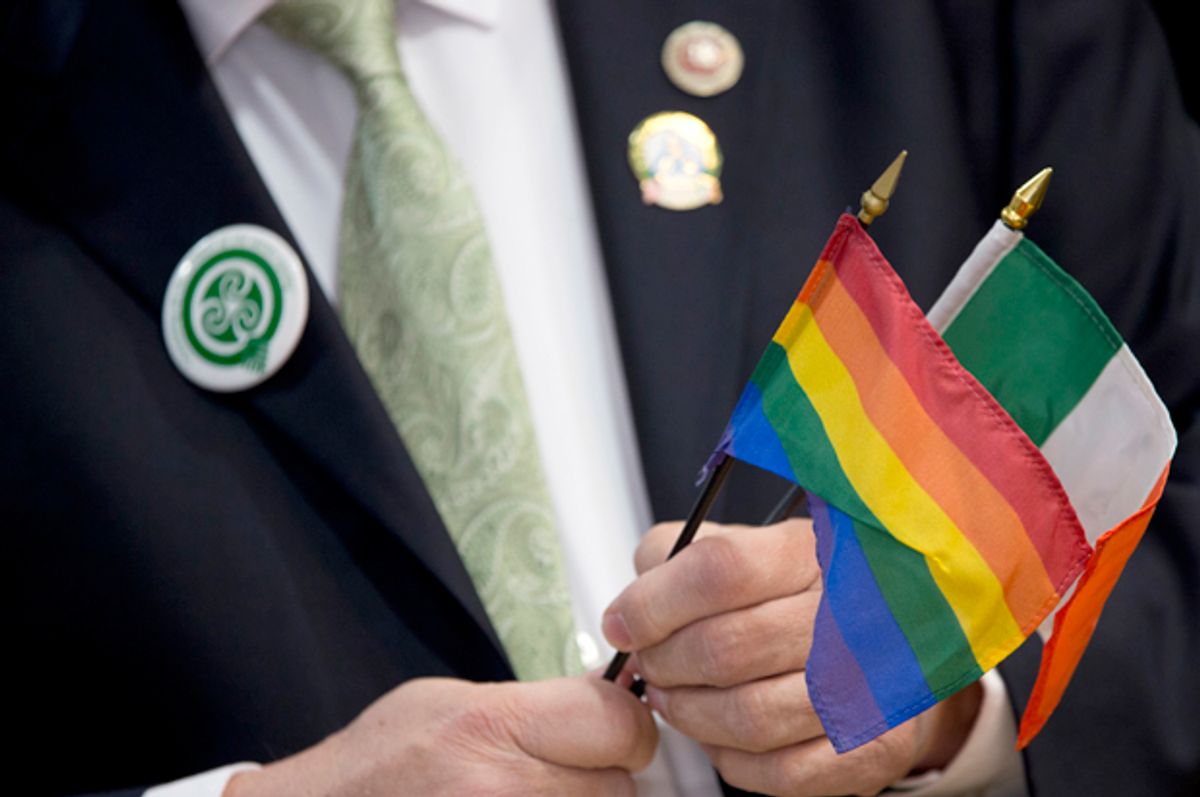 Despite what you learned in college, St. Patrick’s Day is more than an excuse to binge drink and make bad decisions. Looking beyond the ugly green blur, there’s a rich history behind the holiday, and four reasons this year’s celebrations will be uniquely historic.

For the first time in the New York City parade’s 255-year history an Irish LGBT group will be allowed to march under its own banner. It’s about time. The Irish capital city of Dublin has welcomed LGBT parade participation for years and what’s more Irish than a St. Paddy’s Day parade down O’Connell Street? As Irish Foreign Minister Eamon Gilmore said in 2011, “I think they need to celebrate Ireland as it is, not as people imagine it. Equality is very much the center of who we are in our identity in Ireland.”

Because of the change, Mayor Bill De Blasio will end his two-year boycott of the event. De Blasio plans to march with approximately 300 others behind the banner for the Irish LGBT organization Lavender and Green Alliance.

This year would be a good time to remember Mayor David Dinkins’ brave march in 1991. Dinkins negotiated an Irish LGBT organization’s participation in 1991 by agreeing to march with them. But the mayor and fellow marchers were booed, heckled and even had beer thrown at them. In an interview, Dinkins said, “Every time I hear someone boo, it strengthens my resolve that it was the right thing to do.” Parade organizers banned the organization’s participation the next year, sparking a 25-year fight that has finally ended.

Ireland’s recent election has been called a “mess” and the situation “chaos.”

Many Americans know what makes a Black and Tan but don’t know the first thing about the Irish political system. Ireland is a parliamentary democracy. During the February election no party achieved a majority within the multi-party House of Representatives, the body that elects the prime minister and other executive branch officials.

The Irish House of Representatives convened on March 10 but failed to put a new government in place.  Prime Minister Enda Kenny has resigned. The next vote is not until April 6. If the stalemate continues, another national election could be held.

But we shouldn’t fret too much. Resigned Prime Minister Kenny intends to remain in a caretaking capacity and continued the tradition of White House St. Patrick’s Day visits, albeit two days early this year. That’s reason to expect the only places experiencing anarchy this holiday will be pubs and parade routes everywhere.

3. This Year Is the 100th Anniversary of Easter Rising

Think twice this year before ordering so-called “car bomb” shots. Your liver and Irish friends will thank you.

St. Patrick’s Day falls just before the 100th anniversary of the event known as “Easter Rising.” On Easter day in 1916, a group of Irish nationalists attacked British interests in Dublin. The rebels were defeated and their leaders executed. But the day is celebrated annually in the Republic of Ireland as the beginning of Ireland’s independence.

Some St. Patrick’s Day parades are tipping their hat to the anniversary. However, the anniversary is not embraced by all. Those familiar with Irish history know the historical tensions between the Republic of Ireland and Northern Ireland. Some have expressed concern about renewed tensions surrounding the anniversary. Ireland’s soccer team plans to wear special jerseys commemorating the 1916 uprising in two upcoming matches, but that has drawn criticism.

It had once been speculated Ireland would be unified by this landmark anniversary.

4. Marriage Equality Is the Law of the Land

A lot has changed in the U.S. as well. Shortly after Ireland’s referendum, the U.S. Supreme Court ruled that same-sex marriage is a constitutional right effectively striking down existing marriage bans across America.

Since the holiday falls on a Thursday this year, perhaps there won’t be many green weddings.  But it’s possible there will be some well-planned, or spontaneous and whiskey-fueled, marriage proposals.  Good luck.