Ilana's new temp job turns out to be an unpaid gig at a Clinton campaign office, leading to a goofy lovefest 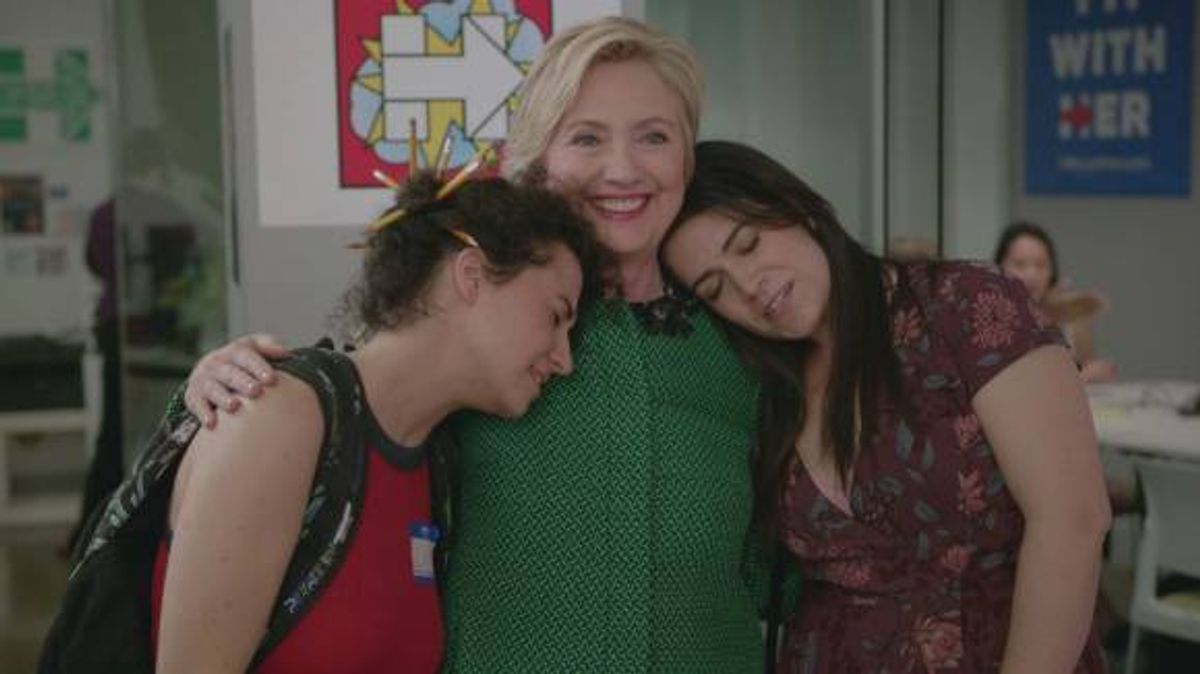 Weirdly, last night’s “Broad City” was full of public servants: Not just special guest star Hillary Clinton, presidential candidate, but also employees of the New York State Department of Motor Vehicles, at various stages of disaffection. As Ilana (Ilana Glazer) searched for a new job after being fired two weeks ago, Abbi (Abbi Jacobson) braved the DMV to renew her license. As is always the case with “Broad City,” the everyday events of the 20-something women quickly wandered into the surrealism of sketch comedy. But this week, with a former First Lady and presidential hopeful on set, “Broad City”’s immature aimlessness read all the more poignant.

Abbi and Ilana represent the youthful enthusiasm that Clinton so desperately has tried and failed to capture in her campaign; their haphazard enthusiasm for Hillary Clinton as a feminist icon exists in a mirror universe to our own where Senator Bernie Sanders hasn’t captured the screaming-college-student vote. And yet it is kind of a tantalizing one. The campaign office Ilana walks into is sleek, modern, and colorful, with a “HILLARY” poster on one wall that looks a lot like the famous Shephard Fairey “HOPE” poster of then-candidate Barack Obama. The arrow-H logo of the campaign is rendered in different color palettes around the office, and one is blown up to corporate-logo size, behind front desk. Anyone who has actually worked on a campaign would marvel at the luxe and trendy facilities enjoyed by the Clinton volunteers, as well as the distinct lack of clutter.

But for Ilana, and for “Broad City”’s vision of Hillary Clinton, the world of politics is one of positive energy and possible change, of optimism and acceptance. The two make unintelligible noises for a solid 30 seconds, as Clinton, hamming it up for the camera, winks first with one eye and then the other. (Abbi’s overcome. “Lifelong Demo. Crat. College. Aquarius. … I pegged!”)

Then Clinton thanks them for their hard work, and when Ilana pledges to tweet for Hillary every day, Clinton responds with her own contribution to the campaign: An inflatable tube man, to boost office morale. Sorry, not a man, a woman; Clinton feels the one she has brought is female. Abbi and Ilana nod enthusiastically. Then they rest their heads on her shoulders as she maternally pats their heads. There is no mention of any specific political issue, either during Clinton’s appearance or earlier, when Cynthia Nixon as her call-center manager discusses their platform.

Instead, “Broad City” focuses on Clinton’s gender—and specifically, what crazy things people say about it, such as calling her a witch, or asking her bra size—and on vague Democrat principles of inclusion, which Ilana first punctuates by saying “yas, kween” and then follows up by suggesting “caramels” and “Ls, Gs, Bs, Ts, and Qs” as groups of the population Clinton could help.

At South by Southwest this week, Glazer and Jacobson told the audience at their panel that Clinton’s presence on the show doesn’t constitute an endorsement of her, but rather, an appreciation of her as an icon—and a nod to how the fictional Ilana, at least, would be “yas, kween”-ing her way through every cold call for Hillary. Though Glazer does appear to support Clinton—and has the mentions to prove it—this does bear out in “2016,” because the Clinton in the episode is not the Clinton-as-candidate we’ve seen so far in this campaign.

Indeed, “Broad City” appears to have asked not Hillary Clinton to the show, but instead, the role she represented in “Parks and Recreation” for lead character Leslie Knope, the tireless public servant depicted by Amy Poehler. Leslie had a framed portrait of Clinton in her Pawnee, Indiana office; Poehler, who has played Clinton on “Saturday Night Live” and performed with the candidate as a result, is an executive producer of “Broad City.” She also publicly supports Clinton. In “Broad City,” Clinton is, pardon the phrase, a kind of boss bitch—the Hillary of “Texts From Hillary,” manifesting a brand of charisma and badassery that creates a certain kind of presence. In real life, Clinton’s moments of authenticity, especially when she’s under the pressure of campaigning, tend to get her in trouble. For every righteously exasperated face made during endless Benghazi hearings or shades-wearing text message sent, there’s an unforced error that reflects badly on her.

“2016” is an episode about two young women who are struggling with a) getting a temporary job and b) getting a flattering identification photo taken. Its moments of peak bliss are a) a bike messenger job and b) an imagined full-service concierge DMV, complete with a rollerskating maître d’ and all-you-can-eat chocolate. “Broad City” is famously, liberatingly basic, even primal, in its statements about women and the working class, following its cast of young, temp-job laborers drifting through the city. In an episode where even Ilana’s temp job manager (Rachel Dratch) is looking for a new job while Abbi “pays” her chiropractor with drawings she’s done, the economy is demonstrably a clusterfuck. Hillary Clinton appears as a superior being stepping off of her pedestal for a few short minutes, to bestow love and kindness to her followers, but she doesn’t quite seem to understand them. Abbi and Ilana are screaming their heads off when they meet her, and it’s effusive enough that Clinton is taken aback, almost as if she’s looking for the catch.

Last night’s “Broad City” scanned, to me, like an episode-long wish for a more charismatic candidate in Clinton, for a candidate that it was just bit easier to believe in or get behind. The appeal is there—it’s definitely present—but it isn’t cool or exciting in the way it was for Obama; it’s not even galvanizing and ideological in the way it is for Sanders.

There are times it isn’t even that practical. Because the closest anyone gets to articulating policy in “2016” is when Nixon’s character says that the volunteers should emphasize how much Clinton will do for working people. But in the show, Clinton’s campaign doesn’t pay Ilana, so after believing that she got a new job, she leaves still unemployed (if more generally inspired). Is Clinton's victory one of identity only, or is there a promise to be made to these young people? I honestly have no idea. The episode ends with a lot of laughs, but politically, it's a mishmash of conflicting subtext, made all the more perplexing by how absurd the show can be. It would have made more sense, for the show, the audience, and Hillary Clinton, if Abbi and Ilana had just hallucinated this version of Hillary; alternatively, I suppose, we could all, collectively, close our eyes and believe that she is just as cool as she looks on TV.