"Look like war crimes to me": Congressman raises concerns over U.S. support for Saudi war in Yemen 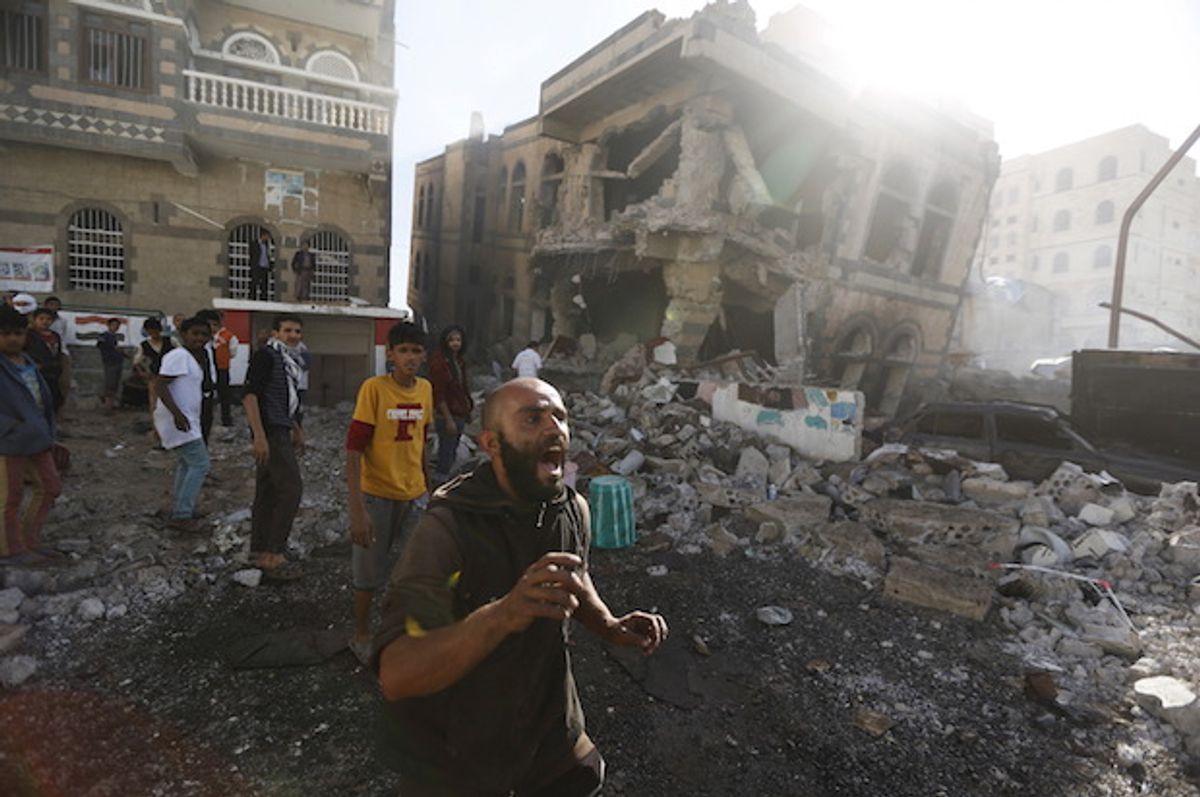 A Yemeni man cries out after a Saudi-led bombing in Yemen's capital Sanaa, on February 10, 2016 (Reuters/Khaled Abdullah)
--

For almost a year, a Saudi-led coalition of Middle Eastern countries, backed and armed by the U.S. and U.K., has been bombing Yemen, the poorest country in the region. Saudi Arabia hopes to destroy Yemeni rebel groups such as the Houthis, and has bombed hospitals, homes, schools and even a refugee camp in the process.

Civilians have paid a heavy toll for the conflict. Thousands have been killed, and human rights groups have for months accused the coalition of committing war crimes.

There has been little discussion of the war in the U.S. media, and American politicians have rarely acknowledged its existence.

One congressman, however, has broken the silence. Rep. Ted Lieu is raising concerns about the ongoing atrocities.

Lieu, a Democrat representing California and a member of the Subcommittee on National Security, sent a letter to Secretary of State John Kerry and Secretary of Defense Ash Carter on March 2. The letter, which was obtained by Salon, draws attention to the little-discussed war.

"I have serious questions about the coalition's operational conduct, the U.S.'s involvement with the coalition, and the U.S. national security interests driving our actions in Yemen," Lieu wrote to the secretaries.

Lieu also cites United Nations reports, which indicate that more than 6,000 people have died in the war, close to half of whom are civilians, including hundreds of children.

The U.N. has also reported for months that the Saudi-led coalition is responsible for approximately two-thirds of all civilian casualties.

Defense Secretary Carter has acknowledged that the U.S. is arming and resupplying the Saudi-led coalition. The Pentagon has also revealed that it is providing the coalition with intelligence, surveillance, reconnaissance and logistics information.

Moreover, media reports have exposed that American military officials are physically in the command room with Saudi bombers, and have access to a list of targets.

Rep. Lieu, who served on active duty in the U.S. Air Force and attended Air War College, wrote in the letter that the "apparent indiscriminate airstrikes on civilian targets in Yemen seem to suggest that either the coalition is grossly negligent in its targeting or is intentionally targeting innocent civilians."

The congressman called on the Departments of State and Defense to "provide an assessment as to whether the indiscriminate nature of the coalition's operations and the targeting of civilians have significantly changed since October 2015."

This is not the first letter Rep. Lieu has written about the war. It cites an additional letter he sent to the chairman of the Joint Chiefs of Staff, Gen. Joseph Dunford, in September 2015, expressing concerns about the heavy civilian toll of coalition airstrikes.

The September letter posed a series of questions about the American support for the bombing, and requested that the U.S. "cease aiding coalition airstrikes in Yemen until the coalition demonstrates that they will institute proper safeguards to prevent civilian deaths."

In October, after the Saudi-led coalition bombed at least two weddings, killing more than 150 people, Lieu joined a dozen other congresspeople, including Keith Ellison, Debbie Dingell and more, in sending yet another letter to President Obama, calling for efforts to avoid civilian casualties in Yemen and to achieve a diplomatic solution to the war.

Salon called and emailed the offices of sectaries Kerry and Carter, as well as the Departments of State and Defense, multiple times with requests for comment. No one from the State Department or from Kerry's office replied.

A lieutenant colonel from the Pentagon told Salon that the department would likely need more time to respond to the letter, given the levels of approval required. He said it is not unusual for a response to take this long.

Another Pentagon spokesman told Salon the department would look into the issue and respond, yet no one has followed up in the more than one week since.

Salon also spoke with Lieu, who explained that he has been given a bit of the runaround on the issue.

"Last year I was deeply troubled to read investigative reports and media articles that highlighted the killing of civilians in Yemen by the Saudi-led air coalition," Lieu said.

"I wanted to know why the Saudi-led coalition appears to either be targeting civilians or being grossly negligent in dropping bombs on civilians," he added.

After sending the letter to the Joint Chiefs of Staff in September, Lieu had two classified briefings with the Departments of State and Defense, in which he discussed the American support for the war.

Lieu said he has asked government officials what exactly the U.S. national security interest is in supporting the coalition, but has not gotten adequate answers.

"It appears to me that I was misled," he told Salon. "I then read about cluster bombs being dropped on civilian neighborhoods in Yemen, and airstrikes hitting civilians areas."

Human Rights Watch says the U.S.-backed coalition has repeatedly used cluster bombs in Yemen, weapons which are banned throughout much of the world. 118 countries have signed the Convention on Cluster Munitions, the 2008 international treaty that bans the weapons — but the U.S. and Saudi Arabia have refused to sign it.

In early January, the Saudi-led coalition dropped U.S.-made cluster bombs on homes in Yemen's capital. Blasting the attacks as "outrageous," Human Rights Watch said the "coalition's repeated use of cluster bombs in the middle of a crowded city suggests an intent to harm civilians, which is a war crime."

"The U.S., as a party to the conflict, should be demanding that the coalition immediately stop using these weapons or risk becoming complicit in their use," the leading human rights group added.

Lieu said he additionally hopes to bring more attention to the war, which is often overlooked, and perhaps even ignored.

"Another reason that I'm writing these letters is simply trying to raise this issue, and the profile of it," Lieu told Salon. "It is a forgotten crisis. There's not very many people talking about it. The media generally does not cover it. And a lot of people are dying."

If the government does not take substantive action on the coalition's conduct, Lieu said he would consider potentially working with other legislators to take action.

"My view is that we should not be helping a coalition that is dropping bombs on civilian neighborhoods that is nowhere near military targets," the congressman said.

"One of my duties was to teach the law of armed conflict, the law of war," Lieu recalled, reflecting on his time in the Air Force. "Some of these strikes look like war crimes to me, and I want to get answers as to why the U.S. appears to be assisting in the execution of war crimes in Yemen."