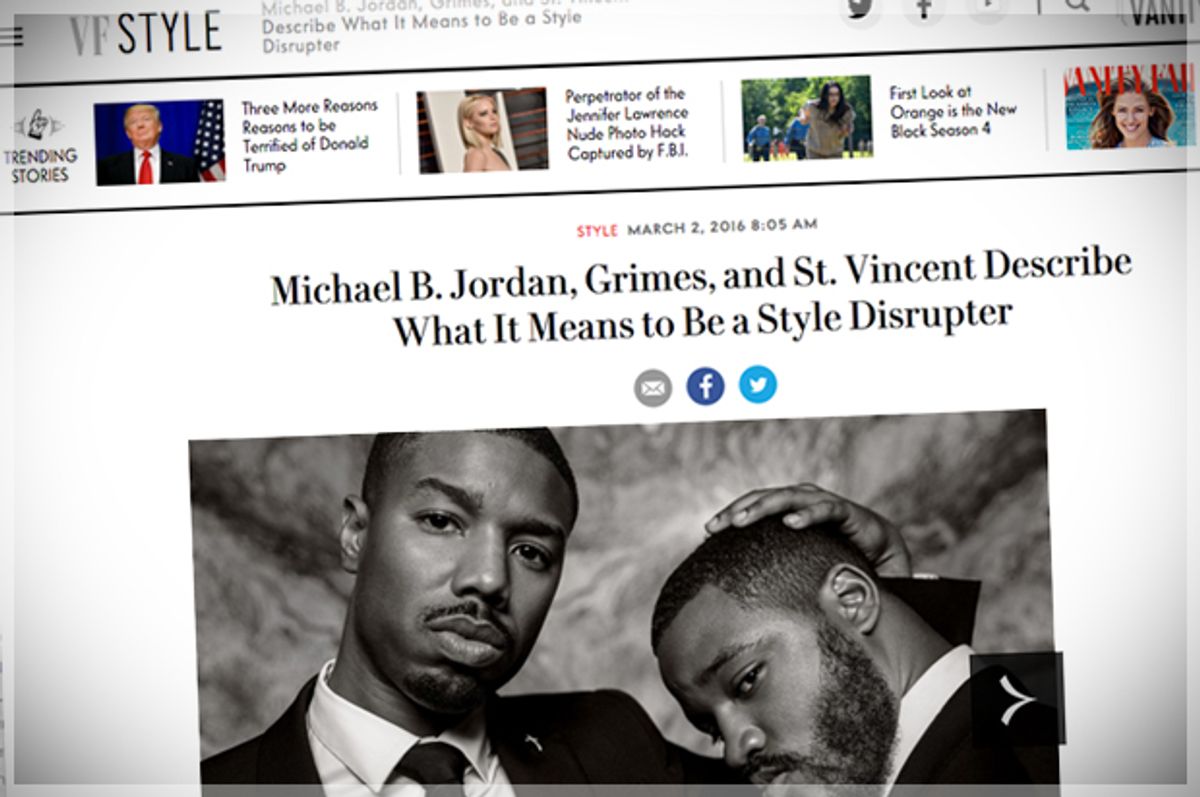 Just like you, maybe, I saw the recently released Vanity Fair portrait of Michael B. Jordan and Ryan Coogler and thought it was a beautiful snapshot of two straight men showing affection for each other; two superstars captured in a rare moment of tranquility. And just like you, maybe, I witnessed the online criticism it elicited over the last week. The responses ranged from violent disavowal to exasperated pride. One refrain, however, interested me most of all: “Why does America keep emasculating black men?” The commenters who asked this, black men themselves, were offended by the image. As a queer man of color I bristled at their response, keenly aware of the homophobia and femmephobia such a sentiment implies. But as someone who has spent the last year documenting the overwhelming whiteness in Hollywood by creating Every Single Word, a video series that edits down mainstream films to only the words spoken by people of color, I know that these comments demand something far more challenging and complex: my understanding.

These men were responding not from a place of intentional hate, but one of terrified preciousness. They fear that one of the few reflections they are afforded as black men could suddenly be devalued and effectively destroyed, and, with unfortunate language, they are protecting it at all costs.

This fear is not new. In 2014 Nate Parker, the writer, director and star of the Sundance hit "The Birth of a Nation" (the surefire 2017 best picture nominee, not the deeply racist 1915 propaganda film), sat down for an interview with BET. In this interview he declared that “to preserve the black man you will never see [him] play a gay role.” The video has since been taken down but, like an elephant, the Internet forgets nothing; an article on Ebony, several blog posts, and a now-defunct URL from Bossip have preserved this quote for posterity. “I refuse to allow any piece of work to emasculate me,” he said in this same interview. In 1993 Will Smith played Paul, a gay character in "Six Degrees of Separation," but infamously refused to take part in the kiss the role required. As legend goes, he was urged against it by Denzel Washington.

If we want to understand the monolithic definition of what it means to be a Great Black Man on Film, look no further than the film industry’s definition of the so-called “best.” The Oscars have nominated 20 performances from black men in the best actor category, more than half of which are shared between only four actors: Denzel Washington, Morgan Freeman, Sidney Poitier and Will Smith. Nate Parker’s performance as Nat Turner will likely become the 21st. A recent article in the New York Times details this thoroughly in “What Does the Academy Value in a Black Performance?” More than half of the nominated performances, the article points out, depict arrest or incarceration. And three-quarters contain violent or criminal behavior. Unsurprisingly, the academy – whose voter base was 94 percent white in 2014, according to the L.A. Times – has a pretty narrow view of what it means to be a black man. None of these nominations, including Parker’s likely one, honor performances of characters who are black and gay.

In her TED Talk, the writer Chimamanda Ngozi Adichie outlines the dangers of these monolithic narratives. “The single story creates stereotypes, and the problem with stereotypes is not that they are untrue, but that they are incomplete. They make one story become the only story.” It seems as though Nate Parker, Will Smith and the commenters have been fed the single story that power is masculinity and masculinity is heterosexuality. Such a myopic narrative robs its protagonists not of power but of humanity. Justin Simien, the writer and director of "Dear White People," recently said that “there is an obsession with black tragedy. If you see a black movie… It’s people who are enduring these horrible tragedies, or they’re saintlike… You know what that says, very subtly? It says that we’re not human. Because human beings are multifaceted.” To be black and gay is one such human facet that viewers do not get to see in mainstream film.

As with the commenters, I must force myself to see neither Parker nor Smith as the enemy; they are victims whose fear was unfortunately expressed through symbolic distancing. This is not about Michael B. Jordan’s and Ryan Coogler’s sexuality; it never was. It’s about what people feel when they see avatars of themselves doing something they fear will take away their power. Part of the privilege of whiteness is the diversity of white avatars that appear on-screen. White people can afford to be less precious about their symbols because they have so many options. People of color, including black men, cannot.

Of course we care about images of ourselves on screens, whether they are our own or similar to our own. Just as we check selfies to make sure we look good, or un-tag pictures of ourselves if they don’t represent who we want to be, we also care about the celebrities that represent us. Like pictures, celebrities are our avatars; they stand for us when we’re not there. They are our proxies in fantasy worlds, historical retellings, and red carpet photographs. They are meant to be just like us. Maybe.

This is, of course, not just about who gets to win awards and play characters, but about who our symbols permit us to become. For me, the dearth of queer Hispanic men on-screen prompted me to fear that I didn’t exist, or worse: shouldn’t. We need more queer black men on-screen, more queer men of all colors. And when I say that, I mean that we need to complicate our notions about who and what a person of color can be, by depicting all diversity – not monolithic ideals – within communities of color.

It feels like white people were handed smartphones with unlimited storage and told to take pictures of themselves while people of color, all people of color, were thrown one disposable camera with the same instructions. All we can do is fight over the camera to take 27 photos and hope — against all odds — that one of them will look just like us. All of us. Maybe.

Dylan Marron is a Drama Desk-nominated writer and the creator of Every Single Word. He plays Carlos on the hit podcast "Welcome to Night Vale."