I'm with Hillary in November: Listen up, fellow Bernie supporters — you must get behind Clinton to stop Donald Trump 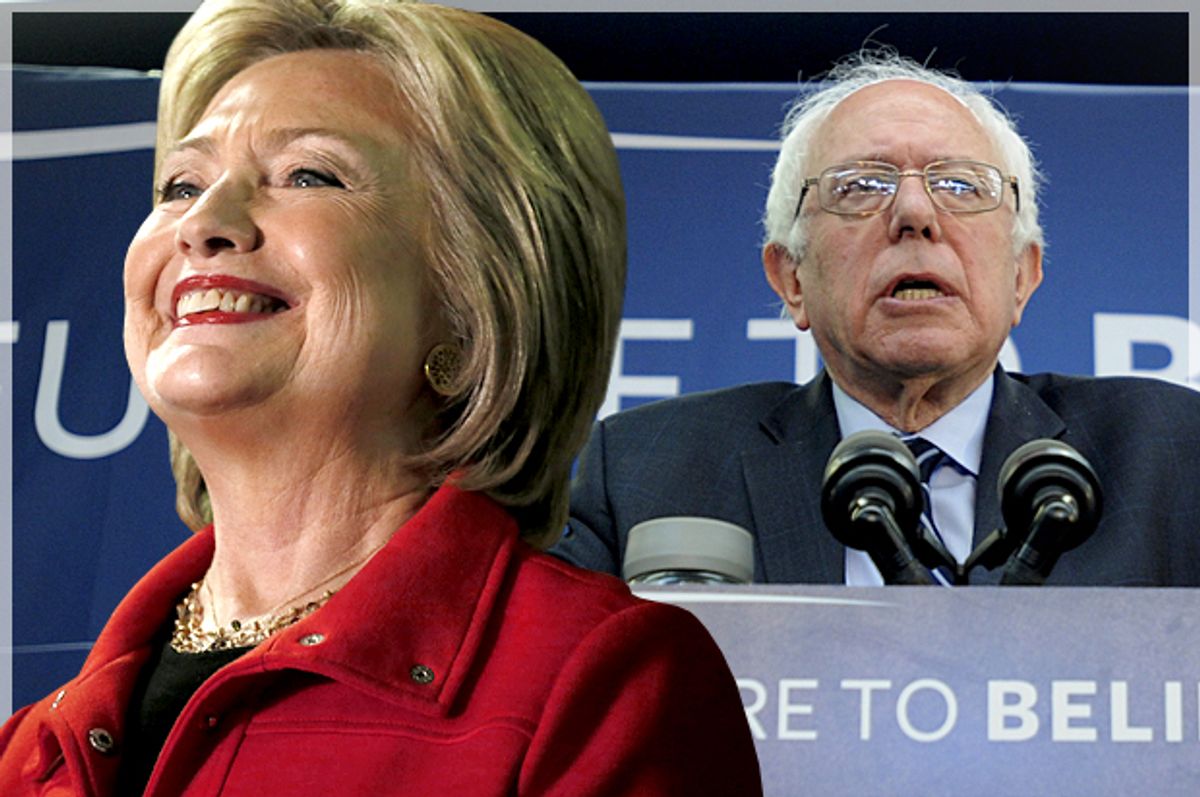 "On her worst day, Hillary Clinton will be an infinitely better candidate and president than the Republican candidate on his best day." - Bernie Sanders

I'll be honest: I don't like Hillary Clinton. Personally, there's plenty to admire about the former secretary of state: She's incredibly bright, broadly experienced, and undeniably competent. Politically, though, she represents a broken system, a system of capitulation and obfuscation. There's no point in denying that.

I don't consider myself a Democrat, though I vote for Democats almost without exception. Gore Vidal once said that “There is only one party in the United States, the Property Party – and it has two right wings: Republican and Democrat.” I tend to agree with that, now more than ever. And I suspect most people of the left do as well.

I've felt the Bern for months, and I've felt it publicly. If you've read any of my pieces on Sanders and Clinton, you know exactly where I stand. Bernie is the most authentic politician I've encountered – at any level of government. I had no illusions about his prospects of winning this race; it was always a long shot. Nor was I confused about Sanders' ability to change government if he was miraculously elected. Everything about our system is resistant to change.

A Sanders administration would doubtless have been a disappointment for progressives, given the systemic constraints. But a Sanders presidency would have been an enormous achievement, a signal of sorts. His campaign, win or lose, is itself a muted miracle, and a reason for optimism. We now know a genuinely progressive movement is possible in this country.

But here's the truth: Hillary Clinton is going to be the nominee. Primary voters should still express their will and vote for Bernie so long as they can, and Sanders should campaign until the convention, but this race is effectively over. The math is clear. Yes, Sanders is in a comparable position to Obama during the 2008 race, but this isn't 2008, and he doesn't have nearly the institutional support that Obama had. Progressives don't want to hear that, and I get it – I really do. But it's true nevertheless. To win, Sanders would need to secure roughly 72 percent of the remaining delegates, with paltry support among crucial demographics, demographics that catapulted Obama past Clinton in 2008. It's not going to happen. And even when Sanders has won primaries or caucuses, he hasn't won by large enough margins to alter the delegate math.

That leaves us with a regrettable – but near-certain – choice in November: Hillary Clinton or Donald Trump.

If that's how it unfolds, I'm voting for Hillary Clinton. This really isn't a choice at all. Trump is a leering huckster, a first-rate con artist peddling hate to dunces. A Trump presidency would be a victory for every noxious and regressive force in our body politic. We also have no idea who he is or what he would do in office – that's positively terrifying.

Despite the hand-wringing among progressives, President Obama moved the country forward. His triumphs were slow-going and piecemeal, but that's his way – and it worked. The unemployment rate is 4.9 percent; 13.7 million new jobs have been added over the last 69 months; more Americans have health insurance coverage than ever; same-sex marriage has been legalized; the American auto industry was rescued from oblivion; two liberal seats on the Supreme Court were protected; U.S.-Cuba relations have opened up; we have a peaceful nuclear deal with Iran; we're gradually shifting away from our reliance on fossil fuels; and the country has enjoyed eight years of a dignified, scandal-free administration.

Hillary Clinton, if nothing else, will preserve this progress. She isn't leading a “revolution” and she's not going to usurp Wall Street's power – everyone understands that. But neither will Trump. Worse still, there's no reason to suppose Trump can do the job. He has no experience, no platform, no ideas, and no respect for the office. He can't be trusted on anything of import to progressives. When you consider what's at stake, no one on the left should prefer Trump to Clinton - this a point that Sanders himself concedes, and it's why he'll surely endorse Clinton if she is in fact the nominee.

A recent Wall Street Journal/NBC news poll found that a third of Sanders' supporters said they wouldn't vote for Clinton if she becomes the Democratic nominee. I don't believe that will hold, but consider for a second what might happen if it does. To begin with, it would likely hand the White House to Donald Trump. Even if you reject Clinton's positions on foreign policy and a host of domestic issues, as I do, she is still preferable to Trump. And if you're a progressive, the fact remains: Clinton reflects your values far more than Trump. If you care about the Supreme Court, which is a conservative judge or two away from denying women autonomy over their own bodies, the choice is obvious. If you care about raising the minimum wage or reforming the criminal justice system or addressing climate change or protecting voting rights, the choice is equally obvious.

Our democracy, such as it is, can sustain a competent Clinton administration. Nothing much will change, but it won't descend into chaos either. Progressives will have to wait for an Elizabeth Warren or some other candidate to emerge. In the meantime, though, we're staring a potential Trump administration in the face. No one knows what the hell Trump is. He's practically an abstraction. What we know is that he's uncorked all the racial and cultural bile this country has to offer, and he's threatening to dump it at 1600 Pennsylvania Avenue. He must be stopped.

Sanders has proven that Democratic voters – and the country more generally – will respond to a FDR-style populist, someone unafraid to say what we all know about our corporate oligarchy. Clinton isn't that candidate, but she will hold the line far better than Donald Trump or Ted Cruz. Sanders gave birth to a progressive revolt in this country, and he moved the Democratic Party to the left. It falls to his supporters to continue that movement beyond this campaign, to keep the pressure on Clinton and other elected officials.

In November, however, there will be two names on that ballot, and one is infinitely better than the other. That's the reality, unpleasant though it is. All the grumbling about voting against a candidate rather than for one, or about the dolefulness of choosing the lesser of two evils, is perfectly understandable – but it doesn't change a thing. Politics is often about what's possible, not what's ideal, and this November is no different.

Trump is a combustible menace; don't think for one second that he can't win a general election. He absolutely can win, and Sanders supporters staying home in protest will make it all the more likely. If that happens, our country becomes an international punch-line, the progressive movement dies in its infancy, and much of what Obama has accomplished will be put in jeopardy. And if none of that persuades you, recall what happened in 2000. Make no mistake: Ralph Nader cost Al Gore the presidency that year. Al Gore was a deeply flawed candidate, but imagine how different the world might look had he won that year.

If the “Bernie or bust” crowd has its way in November, what might we say about Clinton 10 years from now? And how much damage – real and symbolic – will Donald Trump or Ted Cruz have done? Think about that before you surrender to your purism.