Ted Cruz, Christian rocker?: Why there's no conspiracy theory too weird to explain the GOP contender

The Zodiac Killer, Robert Kardashian, the lead singer of Stryper—there's no secret identity too outlandish 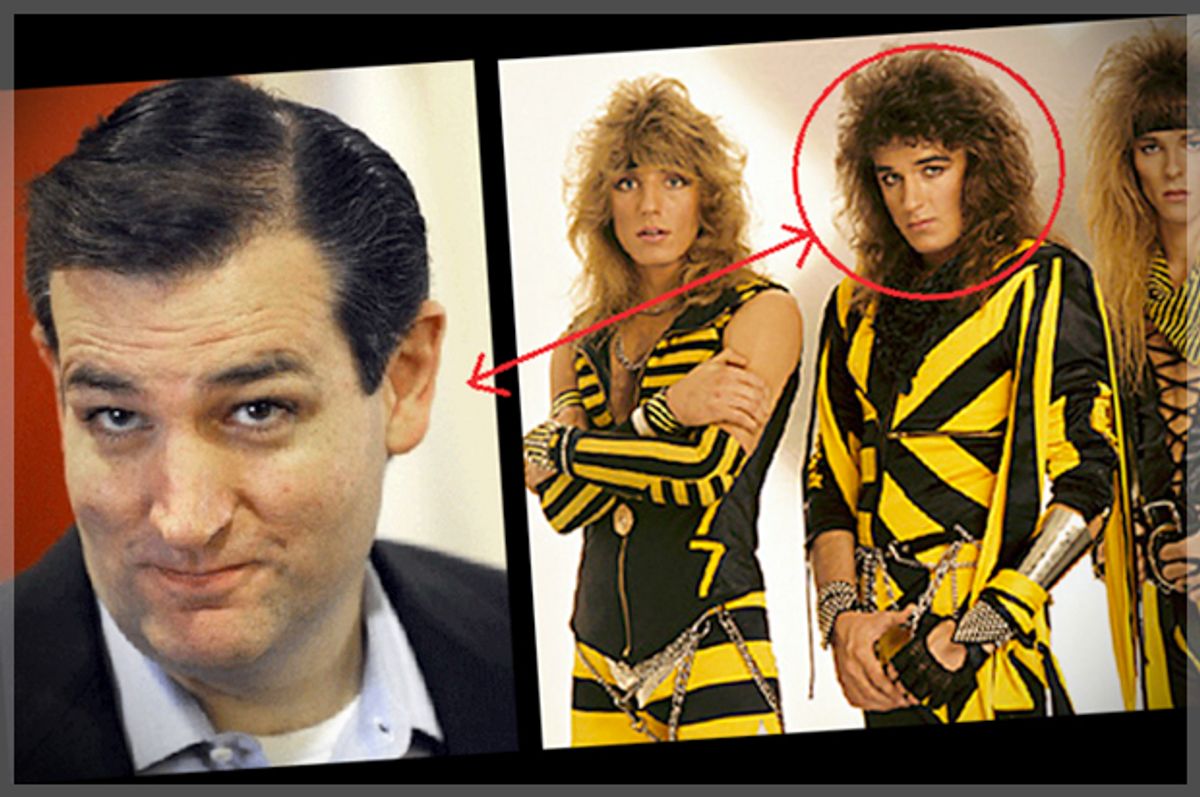 If you laughed to yourself when the notion started to circulate that Ted Cruz was the Zodiac killer and thought that was funny but the end of it, well, there’s another one. The latest conspiracy theory is that the Texas senator is secretly… the lead singer of Christian heavy-metal band Stryper.

As Jay Hathaway writes on The Daily Dot:

You've got to admit, it's a compelling theory. Ted Cruz was a Christian mime in high school, so a leap into this black-and-yellow striped racing costume, isn't so farfetched, right? And, unlike Cruz and the Zodiac Killer, Cruz and Stryper lead singer Michael Sweet are less than 10 years apart in age. They're both about the same height, too.

And a few weeks ago, Cruz was outted as Robert Kardashian. Seeing that the O.J. Simpson lawyer (and father of Kim, Khloe, Kourtney and Rob) died of cancer in 2003, and that Cruz doesn’t even look that much like him, it’s kind of hard to imagine. But the Zodiac killings took place before Cruz was born, so the Kardashian theory may even be the more likely of the two.

Cruz conspiracy theories go back at least as far as last August, when the idea was hatched that a cabal of billionaires, including Vegas mogul Steve Wynn, were all lining up behind the wily Texan and that he would be foisted on the nation, voters be damned.

Why does Cruz seem to attract conspiracy theories in a way that Marco Rubio, also a mid-40s Republican candidate of Cuban descent, or Donald Trump (who is approximately as scary as Cruz) don’t?

Despite being far more conservative than his genial manner implies, Rubio doesn't seem devious enough to attract conspiracy theories in a serious way. And as baleful as Trump may be, he’s pretty open about what he has in mind. We don’t need to fantasize about his outrageousness.

Cruz is different. Part of it is that Cruz seems so theatrical. Watch him in any debate or speech, and he never seems to be answering a question or making a point in even that half-honest way that most politicians do. He catches himself, purses his lips, rearranges his upper body, focuses on the camera, and delivers a line even he doesn’t seem to believe. I’d call it acting, but it’s the job of an actor to make you forget the performance. Instead, Cruz looks like he could transform himself into anything from the Church Lady to the extraterrestrial lizards from “V.”

This Daily Dot report only confirms our suspicions about his teenage years:

But even as Cruz strove to assimilate, he remained laser-focused on building a perfect resumé. His extracurricular activities included speech competitions, Constitutional debate, and, yes, drama.

"Cruz loved being on stage, even if it meant being the villain," NPR has reported, much to the surprise of no one. "In junior high school, he had played Rolfe, the young Nazi in The Sound of Music. He landed the role of the murderer Bill Sikes in Oliver during high school."

The other part is that the Republican party put Cruz out there, at least for a while, as the Not Trump candidate. But as we get to know him better, he turns out to be frightening in his own way, and even more extreme than Trump on some issues. If you thought Cruz was a grownup, getting to know him over time reveals that he’s hardly what we thought he was. So what else could he really be? A wicked witch? Darth Vader? A reincarnated Joseph McCarthy?

Finally: these conspiracy theories about Cruz are all, basically, jokes. (In this way they are different from the conspiracies that Cruz seems to actually believe – that, say, George Soros will abolish golf, or that Sharia law will corrupt the American legal system.)

Jokes have some things in common with monsters we dream up: Jokes tend to come from our collective fears. By laughing at them, we defuse some of our dread and deflate the threat a bit.

Even with Cruz likely to lose the nomination to Trump, he’s likely to continue to haunt our nightmares. And this time next month, we’re likely to have another odd theory or two about who he really is.